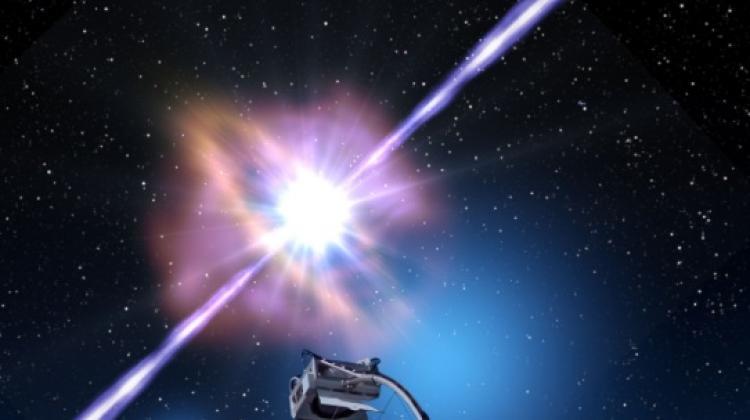 In just a few seconds, a gamma-ray burst emits an amount of energy comparable to the total energy that the Sun will emit over the entire course of its life. After decades of search, two such phenomena, in the range of very high energy, have been recently by scientists including Polish researchers.

Gamma-ray bursts are the most violent known explosions in the Universe. It is believed that they are generated during the collapse of the nucleus of a massive star, in a supernova, or by a merger of neutron stars in a binary system.

After a decade of searching, in July 2018, scientists first recorded such bursts of gamma-ray radiation in the very high energy (VHE) range. The discovery was made by the international High Energy Stereoscopic System (H.E.S.S.) team using a huge 28-meter telescope that is part of the H.E.S.S. telescope network in Namibia.

Surprisingly, it turned out that this extremely high-energy burst, resulting from a cosmic cataclysm, remained in the VHE gamma range very long after the initial explosion, astrophysicist Professor Tomasz Bulik from the Astronomical Observatory of the University of Warsaw said in a press release sent to PAP.

"Gamma-ray bursts are the result of cosmic explosions and last for a short time, usually tens of seconds," says the press release. "These are the brightest bursts known in the Universe. For a long time after the gamma-ray burst, an x-ray, optical and radio glow is observed. Short gamma-ray burst energy is emitted in the form of photons about a million times more energetic than visible light photons. Radiation composed of such photons can only be recorded by instruments located on satellites."

The question of whether the burst of such gamma radiation is accompanied by emission in the VHE range (photons with energy about 100 billion times greater than photons of visible light) remained unanswered until recently.

For the telescope network of the H.E.S.S. Observatory, this location became available ten hours later. Despite this, the H.E.S.S. team decided to carry out the observations, hoping to register the GRB 180720B burst glow in the VHE range. The observations were successful, Prof. Bulik reports.

Two-hour H.E.S.S. observations showed the presence of a new source in the same place as the previously detected optical glow. Such a discovery had been awaited for over a decade, but no one expected such a strong glow so long after the burst.

This groundbreaking discovery gives new insight into the nature of cosmic gamma-ray bursts. An article about the discovery was published this week in Nature.

A team of researchers from five Polish scientific institutions took part in the discovery, including the University of Warsaw, the Jagiellonian University, the Nicolaus Copernicus Astronomical Center PAS, the Nicolaus Copernicus University in Toruń and the Institute of Nuclear Physics PAS. "Poland has participated in the work of the H.E.S.S. Observatory since 2005. It is worth noting that the large telescope used in the present discovery was also built with our participation," Prof. Bulik said. 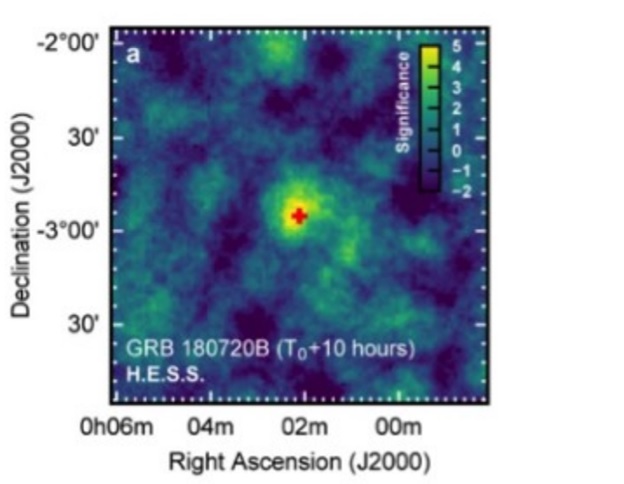 The GRB180720B gamma-ray glow in the very high energy range. The location of the optical source is marked with a red cross; press materials

In the same issue of Nature, another team of astronomers reports a second discovery, made independently for another gamma-ray burst by the MAGIC observatory.

The burst (designated GRB 190114C) was observed on January 14, 2019 by two satellites: Neil Gehrels Swift Observatory and Fermi Gamma-ray Space Telescope. Within 22 seconds, information about it spread around the world and reached the team of scientists cooperating in the MAGIC project. Among them are astronomers from Germany, Spain, Italy, Switzerland, Croatia and Poland - scientists from the University of Lodz.

"MAGIC telescopes were automatically directed at the source and observations began only 50 seconds from the first moment the GRB 190114C burst was observed. Analysis of the data collected in the first tens of seconds showed emissions reaching an energy level billions of times greater than visible light. What`s more, the stream radiation from the source set a new record for the brightest object seen in this energy range. Although the galaxy from which GRB 190114C originated is about 7 billion light years away, its emission was 100 times stronger than the brightest stable source in this energy range, the Crab Nebula," says Professor Julian Sitarek, one of the four scientists from the Department of Astrophysics at the Faculty of Physics and Applied Computer Science, University of Lodz.

Just a few hours after the discovery, the preliminary data analysis results were made available to the global astrophysicists community.

On average, one new gamma-ray burst is observed on Earth every day. Due to the fact that they originate from all corners of the Universe, it is impossible to predict when or from which direction they will be observed. For about fifty years, scientists wondered what maximum energy radiation could be emitted in gamma-ray bursts.

MAGIC (Major Atmospheric Gamma Imaging Cherenkov) is a pair of 17-meter Cherenkov telescopes located on the island of La Palma in Spain. The telescopes were built and are used by 280-strong cooperation of scientists, engineers and technicians from 12 countries.

The University of Lodz has provided a link to a video showing a burst visualization. More on THIS page.