Magnetic wave flows under better control from now on 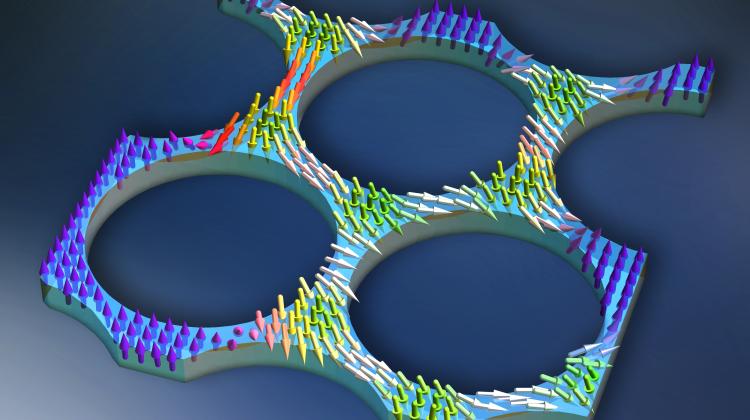 Magnetic bubbles, i.e. places with the same magnetization, are formed on “triangular” islands (green arrows) between holes in the magnonic crystal. Researchers from the Institute of Nuclear Physics of the Polish Academy of Sciences in Cracow have built a model that for the first time allows for the precise prediction of changes in magnetization of such bubbles. (Source: IFJ PAN)

Even faster processors with even smaller dimensions? Wherever neither electronics nor spintronics can cope with performance or miniaturization, magnonics comes to the rescue. But before that happens, scientists must learn how to accurately simulate the flow of magnetic waves through magnonic crystals. At the Institute of Nuclear Physics of the Polish Academy of Sciences in Cracow an important step in this direction has just been made.

One can argue whether the number of holes in cheese is related to its quality or not. Physicists dealing with magnonic materials do not have such dilemmas: the more holes there are in the material, the more interesting its magnetic properties become, but also radically more difficult to describe and model. In an article published in Scientific Reports a group of experimental and theoretical physicists from the Institute of Nuclear Physics of the Polish Academy of Sciences (IFJ PAN) in Cracow presents a new, experimentally verified model, which for the first time makes it possible to simulate local changes in the magnetic properties of magnonic crystals, with great accuracy. Under this exotic name are hidden thin, multilayered metallic structures containing a regular grid of smaller or larger, more or less contiguous round holes. The Cracow-based analyses also suggest that the magnetic phenomena occurring in magnonic crystals are more complex than previously predicted.

“Multilayer metallic structures with a regular grid of round holes have only recently been studied – and not without problems. The point is that this network of holes dramatically changes the magnetic properties of the system, especially the way in which magnetic waves are propagated in it. The phenomena become so complicated that to date no one has been able to describe or simulate them well”, says Dr. Michal Krupinski (IFJ PAN).

Electronics is the processing of information by means of electric charges of electrons flowing through the system. Spintronics, tipped to be the successor of electronics, also uses streams of electrons, but pays attention not to their electric charge, but to spin (in other words: to the magnetic properties). Against the background of both these fields, magnonics distinguishes itself fundamentally. There are no organized flows of media in magnonic devices. What flows through the system are magnetic waves.

The differences between these areas are more easily understood by an analogy with the world of sport. When a stadium fills or empties, streams of people flow within it. If electronics worked here, it would pay attention to the numbers of people entering and leaving the stadium. Spintronics would also observe the movement of people, but it would be interested in the movements of people with light or dark hair. In this analogy, magnonics would deal with the flow... of Mexican waves. Waves like this can circle the entire stadium despite the fact that no one fan moves away from his seat.

The physicists from Cracow produced their magnonic crystals using the method invented by Prof. Michael Giersig from Freie Universität Berlin and developed in IFJ PAN by Dr. Krupinski. The first step is to apply polystyrene nanoparticles onto a non-magnetic substrate (e.g. silicon). The spheres are self-organising and can do this in different ways depending on the conditions. The substrate covered with organised spheres is then subjected to the action of plasma in a vacuum chamber, which allows the diameter of the spheres to be reduced in a controlled way. Thin layers of suitable metals are then applied to the sample thus prepared, one after another. After all the layers have been applied, the material is washed with organic solvents to remove the spheres. The end result is a periodic structure resembling a more or less dense sieve, permanently bonded to a silicon substrate (potentially it does not need to be rigid, the team from the IFJ PAN can also form similar structures e.g. on flexible polymer substrates).

“The systems we studied consisted of 20 alternating layers of cobalt and palladium. These are very thin structures. Their thickness is only 12 nanometres, which corresponds to about 120 atoms”, says Dr. Krupinski.

Depending on the size of the holes, larger or smaller areas with shapes similar to a triangle are formed between their points of contact. Atoms within these areas can be magnetised in the same way forming so-called magnetic bubbles. These bubbles can be used to store information, and changes in their magnetization allow for the propagation of magnetic waves in the system.

The theoretical model, built in IFJ PAN under the direction of Dr. Pawel Sobieszczyk, describes magnetic phenomena occurring in crystals with dimensions of two by two micrometres. On the scale of the microworld, these dimensions are huge: the number of atoms is so large that it is no longer possible to simulate the behaviour of single atoms. However, due to the mutual magnetic interaction, the magnetic moments of adjacent atoms are usually oriented in almost the same direction. This observation allowed atoms to be grouped into small volumes (voxels), which could be treated as single objects. This procedure radically reduced the computational complexity of the model and made it possible to carry out numerical simulations, which were performed at the Academic Computer Centre Cyfronet AGH University of Science and Technology in Cracow.

“The key to success was the idea of incorporating imperfections found in real magnonic crystals into the model”, says Dr. Sobieszczyk and enumerates: “First of all, real structures are never perfect crystals. They are usually clusters of many crystals called crystallites. Depending on the size and shape, crystallites can have different magnetic properties. Moreover, chemical contaminants may appear in the system. They cause certain areas of the material to lose their magnetic properties. Finally, the individual metallic layers can be thicker or thinner in places. Our model works so precisely because it takes all these effects into account”.

The model presented here predicts the existence of an interesting, hitherto unobserved phenomenon. When two adjacent bubbles are magnetised reversely, the magnetic moments of the atoms between them can change their orientation either by rotating parallel to the plane of the layer or perpendicularly. A kind of wall is then created between the bubbles, in the first case called a Bloch wall, in the second – a Néel wall. Until now, it was assumed that only walls of one kind could be found in a given magnonic crystal. The model developed by physicists from the IFJ PAN suggests that both types of magnetic walls can occur in the same crystal.

Magnonics is only just getting started. The path to complex processors – smaller, faster, and with a logical structure that could be reprogrammed according to needs – is still a long way off. Magnonic memories and innovative sensors capable of detecting small amounts of substances seem more realistic. Understanding the mechanisms responsible for the magnetic properties of magnonic crystals and the ways magnetic waves flow brings us closer to these types of devices. This is an important step, after which the next ones will surely come.