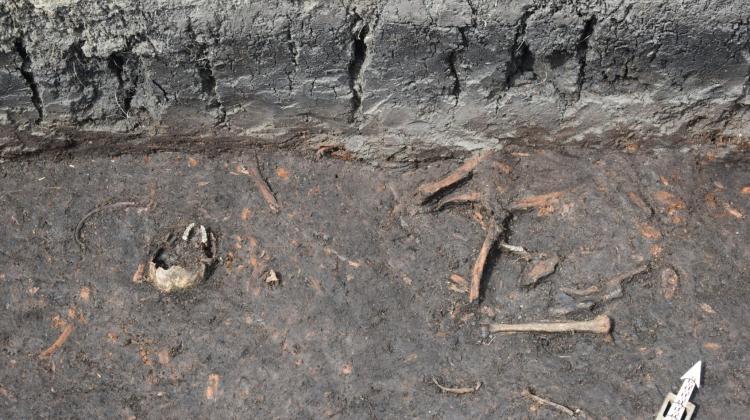 A geoarcheologist from the University of Lodz has been uncovering the the secrets of settlers in the Russian microregion Serteya 5,000 years ago.

Dr. Piotr Kittel from the Faculty of Geographical Sciences of the University of Lodz, together with Russian scientists from the State Hermitage Museum in St. Petersburg, found that in addition to cooking fish broth in ceramic vessels and keeping their supplies in baskets, the settlers lived in houses built above the water level on wooden pile.

The research carried out in the Serteya microregion located in the Smolensk region focused on the third millennium BC, palafite (pile-dwelling) settlements developed on the shores of the local lakes.

Due to good geological conditions, baskets for storing supplies, pieces of bast fabric, traps and fishing nets, fragments of richly decorated ceramics have been very well preserved in the studied areas. It is even known that the settlers cooked a kind of fish broth in large pots.

"In the lake sediments, we also came across two skeletons - a girl, about fourteen years old, and a young, about twenty years old woman.

“We also managed to find single bones of a man`s hand. We are analysing this material, thanks to this discovery we can learn much more about life in these areas almost 5,000 years ago," said Dr Kittel.

He added that the neolithic communities of this part of Europe were based on an absorbable economy with an important role for fishing.

The scientist conducts palaeogeographic research. Its purpose is to recreate palaeoclimatic conditions, changes in water level in a former lake, palaeoecological conditions of the lake environment and palaeoenvironmental conditions of the functioning of pile-dwelling settlement, availability of natural resources and human-environment relations in the Middle and Late Neolithic. An important aspect of his research is to determine the impact of climate fluctuations in the Middle and Late Holocene on Neolithic settlement in Eastern Europe.

Dr. Kittel is scientific director of the Polish research team in Serteya. He carries out his research under the National Science Centre grant "Environmental conditions of the functioning of the palafite settlement of Serteya II in the Smolensk Upland in the context of global and local climate changes approx. 4.2 thousand years ago". Researchers from various research centres in Poland, Russia, Germany and France are involved in the project.