Neurotransmitters in an instant 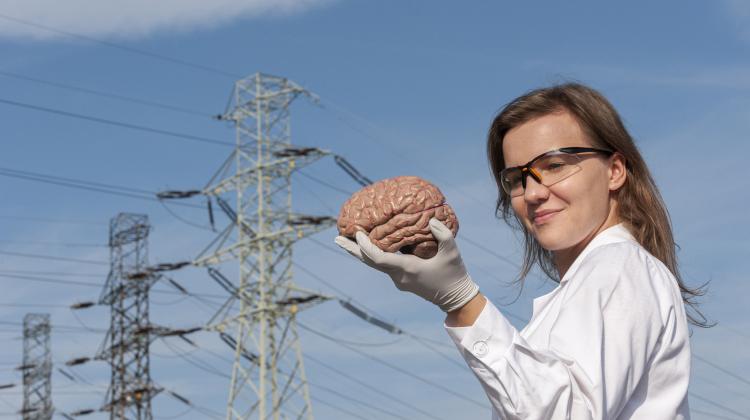 Dopamine, serotonin, adrenalin.. ... The smooth functioning of the human brain depends on their correct proportions. Any disturbances mean diseases. That’s why it’s so important to be able to detect these disturbances as early as possible - before the appearance of any visible symptoms. This will be possible quickly, simply and cheaply thanks to the work of a team of researchers headed by Professor Martin JönssonNiedziółka from the IPC PAS.

"We are aiming to detect neurotransmitters at the lowest concentrations and without additional sample preparation," says the author of the work published in Analytical Chemistry, Magdalena Kundys-Siedlecka. "In the paper we have just published, I proved that in mouse serum (i.e. blood without the red blood cells) I can detect serotonin at concentrations that are as low as those found physiologically."

Serotonin is sometimes called the hormone of happiness, so it seemed reasonable to ask if the mice used in the study were happy or unhappy?

"It seems to me that the mice we studied were ...just ordinary,” answers the head of the research group Professor Martin Jönsson-Niedziółka with a laugh, "Neither happy nor unhappy, and their serotonin levels were statistically normal."

Where did the idea for this method come from? "Firstly, we wanted to detect many neurotransmitters simultaneously in one sample," explains Magdalena Kundys-Siedlecka. "Secondly, in low, physiological concentrations, so that any possible disease could be detected early on. Thirdly - in a sample needing the least possible processing - collect samples of blood, saliva, or, for example, cerebrospinal fluid and detect the neurotransmitters in them without much additional preparation."

It is said that, for example, Alzheimer`s disease is caused by a deficiency of dopamine in specific areas of the brain, but in reality, the disease mechanisms are much more complicated. Usually, it is not an excess or deficiency of only one neurotransmitter that leads to disease, but rather the wrong mixture of them or some other underlying cause. If we can manage to find out what the concentrations of the various substances are in one sample, taken at the same time, from the same place, we can talk much more accurately about what is really the cause of one or other of the disease symptoms.

How did our scientists manage to do this? The key is stirring the sample on an electrode. This forces faster mass transport. "We increase the reaction efficiency manyfold and accelerate the measurement", explains Ms. Kundys-Siedlecka proudly. "The limit of detection is extremely low. We are able to detect all the neurotransmitters that are electrochemically active, that is, undergoing oxidation and reduction. I show how to determine two of them - dopamine and serotonin simultaneously. I have to add that we identify dopamine without fail, although it is very similar to others, such as adrenaline, noradrenaline or some catecholamines,” grins the researcher.

You could compare this to looking for a needle in a haystack. The sample is a huge haystack and we want to find the needle. And it works! This is only possible thanks to well-modified electrodes separating signals from the various neurotransmitters.

“In the next stage of our research, we would like to check whether our method detects neurotransmitters in human blood as precisely as it does in mice," says the researcher. "If this is confirmed, we will be able to draw less blood from the patient - just a drop (70 microlitres) will be sufficient to determine many of these substances, and our goal is to detect even lower concentrations, which would give us the opportunity to identify, for example, dopamine in fluids other than blood, those that don`t hurt at all when they’re taken."

“We can already detect serotonin in concentrations similar to those found in humans," explains Professor Jönsson-Niedziółka. "With dopamine - the most interesting of the neurotransmitters - we haven’t managed yet, and others have such low concentrations that we need to modify the electrode surface further, and probably the entire method, to say with a high probability that we detect them in an unprepared sample. We know, however, that at higher concentrations we can already separate serotonin and dopamine signals in the same sample."

"Our method has two benefits for any hospital that wishes to use it: first, time - in the case of serotonin, it is the fastest known detection method, less than an hour from collection to result; well, unless the sample needs to also be transported, " specifies the professor. "Secondly, the cost - the method is cheap, and the equipment can be operated by a technician after a short period of training."

"The main requirement is patience,” smiles Ms. Kundys-Siedlecka. It is left to us to wait with impatience for the results of the research of the IPC PAS team to reach hospitals, for them to help to uncover the mechanisms of development of such diseases as depression and Alzheimer’s and to improve their treatment.