Polish-Dutch Team Describes First Comet from Outside the Solar System 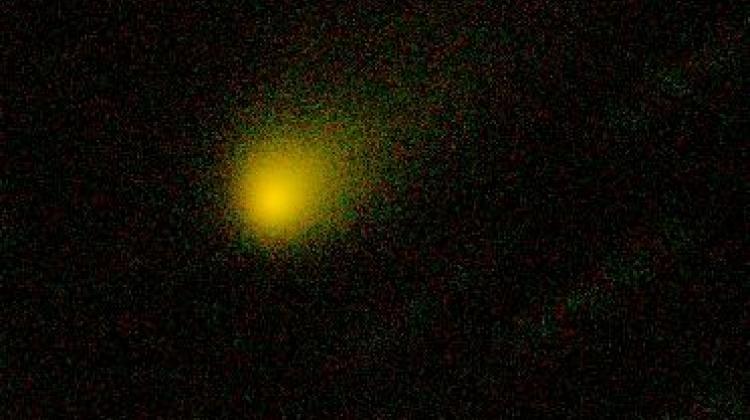 2I/Borisov comet (marked in yellow) from another planetary system, described by Polish researchers, is now passing through the Solar System. The Polish-Dutch team managed to describe it. Source: Piotr Guzik et al.

2I/Borisov is the first-ever comet from another planetary system caught travelling through the Solar System. Astronomers from Poland and the Netherlands have just described it. Researchers have one more year to observe this amazing celestial object.

A comet from interstellar space is now passing through the Solar System. Its appearance is completely normal: its colour and size are no different from the local comets. "We are 100% sure that the comet was formed in a different planetary system. So we have a piece of matter from another corner of the Galaxy practically under our noses," says PhD student Piotr Guzik from the Jagiellonian University. The astronomer, together with colleagues from the Jagiellonian University and Dutch universities, described this comet and identified its unusual origin. The paper has just been published in Nature Astronomy.

This is the first known comet arriving from such a distance and at the same time the second object originating from interstellar space observed in the Solar System. The first one was the asteroid `Oumuamua, discovered two years ago. It was a cigar-shaped rock tumbling through in space.

Piotr Guzik explains that after the discovery of `Oumuamua, his team prepared a computer program that searches the newly discovered celestial objects. "If our program finds an object that can be an interstellar object, it sends us a notification," says the researcher.

And just now such an interesting object appeared. On August 30 this year, in the Crimea observatory, amateur astronomer Gennady Borisov noticed an unknown cosmic object in the sky photographs, which was later named after him. Further studies of the object`s trajectory showed that it was moving in an open orbit at a very high speed, which clearly indicated its extrasolar origin.

A team led by astronomers from Kraków immediately began observing the object. "We were able to secure observation time on the WHT telescope on La Palma, and on the Hawaiian Gemini North telescope," the astronomer says. Everything happened very quickly: observations were carried out two days after the initial determination of the object`s origin. The Polish-Dutch team immediately noticed the comet`s distinctive features: a hazy coma and a tail. Scientists have also determined that the comet reflects more red than blue light, its nucleus has a radius of about 1 km, and the tail is formed by dust. "So far, this comet is no different from +our+ comets from the Solar System. And this is surprising as well," says the astronomer from the Jagiellonian University. 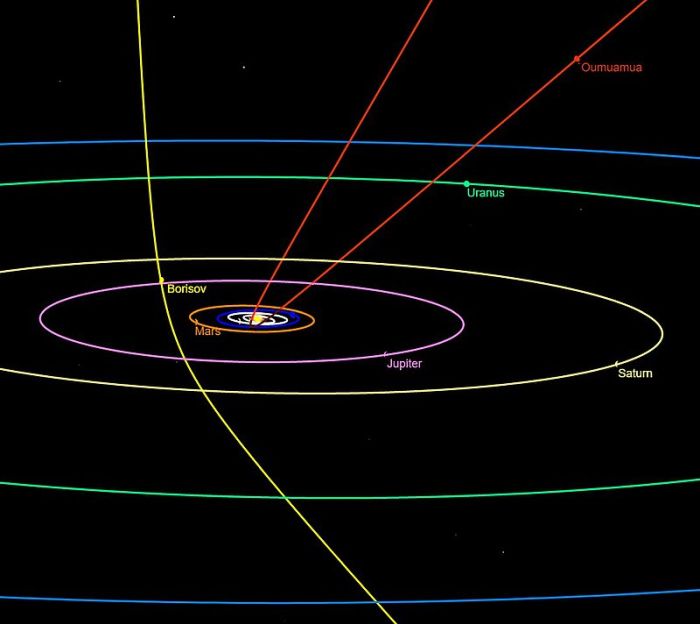 2I/Borisov comet (marked in yellow) from another planetary system, described by Polish researchers, is now passing through the Solar System. The first known object from another system was the asteroid `Oumuamua (marked in red). Source: Wikipedia CC BY-SA 4.0

Piotr Guzik explains that the Solar System is surrounded by the Oort Cloud. "There are billions of comets there. Some of them sometimes venture closer to the Sun," the scientist says and clarifies that the new comet moves completely differently than comets from the periphery of our planetary system.

The astronomer adds that 2I/Borisov comet was discovered too late to send a space probe and take matter samples. But there are plans to prepare a probe over the next decade; the probe would wait in orbit for the next guests from far away passing by the Earth.

The researcher reminds how comets are built. "The nucleus of a comet is usually a lump of ice and dust. You could call it a dirty snowball. When an object approaches the sun, the ice turns into water vapour, which carries dust. We observe this matter as a foggy cloud around the nucleus, called the comet`s coma. Some of this matter is blown away by the pressure of sunlight and the magnetic field present in the solar wind, forming a tail," he says. The comet`s tail does not drag behind the celestial body like a braid of a fast-riding motorcyclist, but is usually facing away from the sun.

2I/Borisov will be on its closest approach to the Sun on 8 December 2019, and then it will move away from us forever. Astronomers have one more year to study it well. Later, the comet will no longer be visible even through the best telescopes.