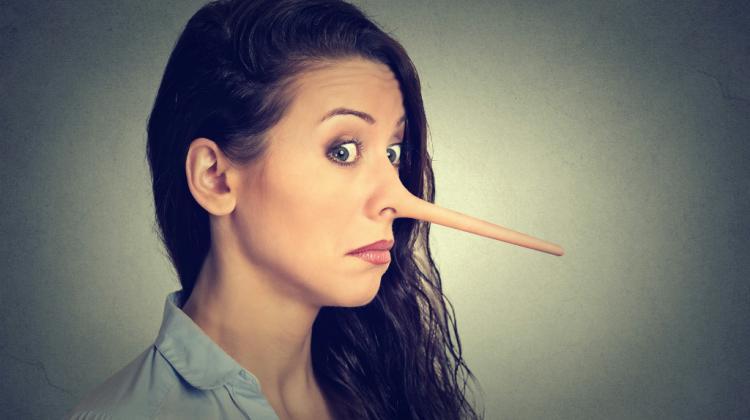 People`s effectiveness in detecting whether someone is lying or telling the truth is low (53-54%). A psychologist from Warsaw is working on a free program expected to be more effective than people in detecting lies - thanks to the use of artificial intelligence algorithms.

"We want to create a tool that will allow everyone to analyse statements in terms of their truthfulness," says psychologist Dr. Justyna Sarzyńska-Wawer from the Institute of Psychology of the Polish Academy of Sciences in Warsaw. Dr Sarzyńska-Wawer wants the program to be available online for free in one year. Anyone will be able to enter a text they want to test and get a hint whether the author of the statement is telling the truth or rather lying - along with an analysis of the characteristics of the statement in question.

In order for an artificial neural network to learn how to distinguish between a lie and a truth, it must be "fed" data. When asked where she finds liars, Dr. Sarzyńska-Wawer laughs: "We force people to lie." She explains that the subjects - 400 people in total - are invited to the laboratory. "We`re looking for topics, on which each of these people has a clear, well-defined opinion," she says. She gives an example that among the topics given to the subjects are serious issues concerning abortion, euthanasia or, for example, whether people are good or bad by nature. And there are more mundane matters. For example, whether Ewa Chodakowska is the best Polish coach or Robert Lewandowski is the best Polish football player. There are also topics related to science, for example vaccines or ... Jerzy Zięba.

"Then we ask the respondents to write an opinion consistent with their view, and then another one, inconsistent with their view. And also to tell us once about their position, and then to present an opinion completely opposing their view. In total, there are four statements" - she says. Oral statements are transcribed to create texts. "A corpus will be created, in which we will know perfectly well which statement is consistent with the opinion of the examined person, and which is not," the researcher says. Artificial intelligence will only analyse the text - primarily the extra-lexical and stylistic aspects of the statement. And based on this, it will determine the features associated with lying and telling the truth.

The psychologist adds that in addition to artificial intelligence, recordings and texts will also be evaluated by other people. They will be asked to guess which statement is false and which is true. "We try to identify credible liars: the people, who are believed when they speak untruth. But also the other way around. There are those unfortunate, whom the recipients do not believe even when they tell the truth," she explains. The algorithm will help determine what these people are characterized by.

To distinguish between truth and lies is not an easy task. "People have roughly 53-54 percent effectiveness in recognizing the lies of people they don`t know," she says. This effectiveness is only slightly higher than random. You could just as well toss a coin (the effectiveness would then be 50 percent).

Preliminary results show that the program trained by psychologists is already more effective than humans although only 3/4 of the respondents have been tested.

When asked if she is afraid to share such a program online, she says: "That would be like sharing a hammer and being afraid that someone will use it to kill."

The psychologist is also not afraid that, for example, the program will break many marriages. "When it comes to guessing the truthfulness of the person with whom we are in a close relationship, people are really good at it. A wife does not need artificial intelligence to determine if her husband is not completely honest," the researcher smiles. She adds: "Politicians will definitely go first". She points out that while artificial intelligence is increasingly effective, it can still make mistakes.

According to her, the tool can help some people. "Especially people who are not perceived as honest even when they are telling the truth," she believes.

According to Dr. Sarzyńska-Wawer, research in the USA and Great Britain showed that false statements are simpler. "Lying is cognitively burdensome, so liars do not have the resources to create complicated structures. It is assumed that a lie is connected with a sense of guilt. So when deliberately telling untruths, there are more terms with negative valence. There are also studies showing that the statements of people who lie are more abstract. There is a whole classification of verbs that allow you to guess with greater certainty that someone is lying. It has also been noted that when people lie, they use less first-person pronouns," the psychologist says. Researchers now want to check if the same phenomena occur when lying in Polish.

"Models for processing natural language are able to capture many characteristics of statements. For example, tools have already been developed that analyse whether the author may suffer from schizophrenia or autism. I want to use the possibilities offered by artificial intelligence to study the phenomenon of lies," concludes Dr. Sarzyńska-Wawer.