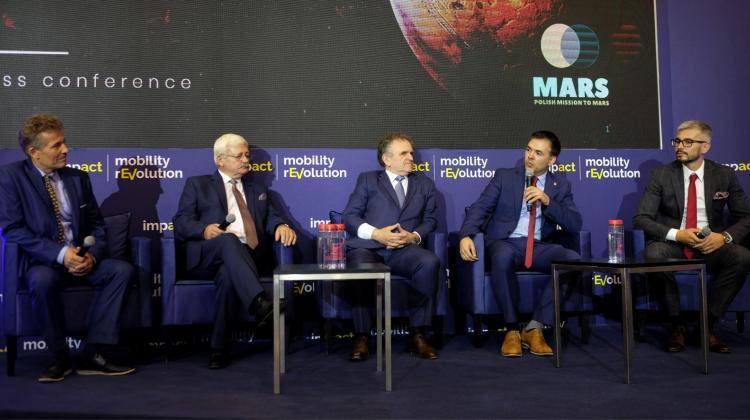 COO at T-Bull Grzegorz Zwoliński (R), lecturer at the AGH University of Science and Technology in Kraków Prof. Tadeusz Uhl (3R), representative of the Faculty of Microsystem Electronics and Photonics at the Wrocław University of Science and Technology, Prof. Jan Dziuban (2L), Artur Chmielewski from NASA (L) and Stephen Eisele from Virgin Orbit (2R) during the presentation of the Polish mission to Mars project during the Impact mobility rEVolution conference in Katowice. PAP/Andrzej Grygiel 9.10.2019

Representatives of Polish universities, the Wrocław-based company SatRevolution and the American company Virgin Orbit signed an agreement this week in Katowice, forming a consortium that plans to send a Polish satellite to Mars and its moons.

According to announcements made during the Impact mobility rEVolution `19 conference, a Polish unmanned satellite fitted with equipment made in Poland would be launched in 2022.

"The satellite will be made in Poland, the equipment on board will be mostly Polish, and the planning and management of the mission in cooperation with the Poles will be the responsibility of the Americans, because they have experience in this" - said the science director of the venture Prof. Jan Dziuban from the Wrocław University of Science and Technology. "We currently anticipate a package of four Polish instruments. We anticipate that the entire satellite will be made in Poland, its electronics, communication, management, microprocessors, software, mechanical structure - that is our ambition," he added.

The satellite will carry an observation system that will take photos of Mars and - probably - its moon, Phobos. "Phobos is a small moon of Mars, you can only fly small objects to it because it has very low own gravity and to get close to it, you need to operate gently, otherwise you will miss," explained Prof. Dziuban.

Polish infrared sensors are also to fly to Mars. They will be used to measure the temperature of the tested objects. They will be accompanied by a spectometer that enables measurements of atmospheric pressure, and a biological microsystem: a germinating plant or soil-forming fungi. "There are still discussions. With this system, we will try to check whether they will retain their life potential after such a long flight," explained Prof. Dziuban.

Preliminary work carried out by the consortium showed that a satellite with a mass below 50 kg could be used to carry out a wide range of scientific research, including satellite imaging of Mars and its moon Phobos, analysis of the Martian atmosphere and even the search for underground water.

Wrocław-based company SatRevolution, specializing in satellite solutions, will be primarily responsible for designing and building the satellite, and will provide basic subsystems. In April 2019, SatRevolution sent Światowid, the first Polish observation satellite, into orbit. "Polish scientists and engineers are ready to develop the first ever interplanetary scientific CubeSat mission. This mission will galvanize the Polish space sector and mark its position on the international arena. The project will accelerate the development of small satellites and lightweight space science instrument technology. We want Poland to be `the go-to` country for small interplanetary spacecrafts,` said SatRevolution COO Grzegorz Zwoliński.

The satellite will be launched on the LauncherOne rocket owned by Virgin Orbit. It is an aviation launch platform capable of conducting operations from space ports around the world. LauncherOne rockets are manufactured in Long Beach, California, and launched from Boeing 747 transport aircraft. The first Virgin Orbit orbital rocket is currently being tested and prepared for a flight to take place at the end of this year.

"Virgin Orbit is thrilled to join this consortium, as it speaks directly to our mantra of `opening space for everyone`. Given Poland’s strong foundation in engineering and sciences, government and academia in the country would benefit greatly from the increased access to space afforded by flexible, dedicated launch platforms like LauncherOne. We have already seen the incredible utility of small satellites here in Earth Orbit, and we’re thrilled to start providing dedicated launches to deep space. We’re proud to enable a new wave of Polish creativity and innovation in space," said Virgin Orbit’s Vice President of Business Development Stephen Eisele.

The consortium members did not provide information on the cost of the mission or its financing plan. They only assured that it was not expensive and that advanced talks on financing in the public-private partnership formula were underway.