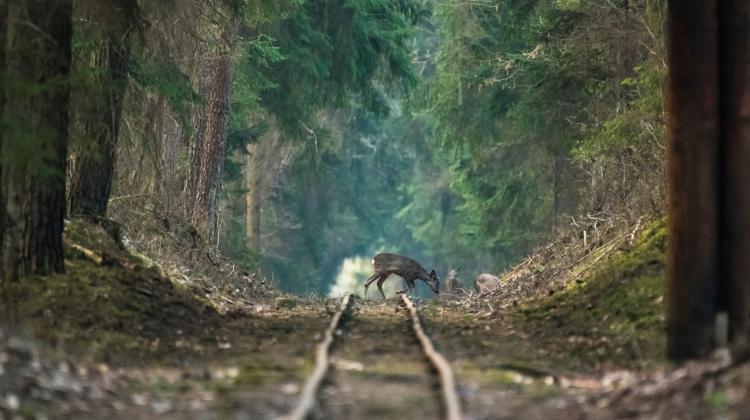 The risk of collision of trains with elks, wild boars, deer and roe deer is affected by factors including animal density, train speed and traffic, researchers have determined after analysing over 3.5 thousand collisions in Poland. This risk can be reduced, the authors of the study say.

To assess the risk factors of collision of wild ungulates with trains, researchers analysed various factors related to the environment, rail infrastructure and animal density at accident sites (and - for comparison - at random locations). They obtained data on collisions with wild boars, roe deer, deer and elk from the Polish Rail. They included over 3.5 thousand collision cases that took place all over Poland in 2012-2015.

"The results show that the risk of collision with animals representing any of the four analysed species increases if there is a forest near the tracks. However, interestingly, this relationship is not maintained in the case of ecological corridors. Our analysis shows that the presence of ecological corridors near the tracks increases the risk of collision only in the case of deer. The presence of buildings near railroad tracks appears to reduce the likelihood of collision, especially in the case of roe deer, deer and wild boar", explains the first author of the study, Dr. Karolina Jasińska from the Warsaw University of Life Sciences (WULS-SGGW) in Warsaw.

"Our research has shown that elements related to railway infrastructure are also significant. Curves on railway tracks are particularly important, as they limit the view of both the driver and the animal. Research shows that the presence of curves increases the risk of collisions with deer, roe deer and wild boar", she emphasises.

Drs Jasińska adds that in the case of railway infrastructure, the speed of trains and their intensity during the day are also important. Research shows that the faster a train moves, the greater the risk of collision.

"The risk also increases with the increase of local ungulate density, but this increase is clearly non-linear: the more animals, the more collisions, but only at low density ranges. Above certain density levels, a further increase in the number of animals does not increase the risk. Therefore, density reduction to reduce the number of collisions is not very effective unless we kill (almost) all animals. Why? We believe that the explanation is herd behaviour: when density increases, the animals form larger herds, and the number of independent crossings - and therefore collisions - does not increase proportionally to the number of animals, but to the number of herds" - notes one of the authors of the study, Dr. Michał Żmihorski from the Mammal Research Institute PAN in Białowieża.

"To our knowledge, collisions with wild ungulates have not created any dangerous situation for passengers. However, we should remember that as trains are getting lighter and faster, there is always a risk of tragedy" - reserves Karolina Jasińska.

The authors of the study also identified solutions to prevent collisions. "Our research shows that the risk of collision is uneven and we can identify the traction sections where it is the highest. Primarily these places should be secured: the sections of railway tracks adjacent to forest areas and on routes where trains reach the highest speeds" - the researcher from WULS-SGGW says.

In practice, the risk can be reduced by placing fences on specific route sections or by installing deterrent devices, e.g. sound devices. Possible reduction of the population will solve the problem only temporarily and on a small scale, and only in areas where population density is already low, and therefore the risk of collision is also relatively low, write the authors of the study.

They also reserve that the results of their research are difficult to compare with other studies in the world, because the topic of collisions of animals with trains has still not been well researched. "The most data concern Scandinavia, where very common collisions with elk are a big threat. In Poland, the number of this species continues to grow, which must be taken into account when building new railway tracks in the east of the country" - Dr. Jasińska emphasises.

Scientists remind that the total length of rail routes in the world exceeds one million kilometres, and a large part of them run through more or less wild areas. Collisions with animals are inevitable. The consequences of accidents do not necessarily mean human casualties. However, equipment damage and delays often occur.

Due to the increasing numbers of these animals and the recent modernization of many railways, the number of collisions with animals has increased in recent years. It is estimated that the number of wild ungulates that die on the tracks is approx. 0.13-0.42 percent of the number of these animals killed every year by hunters. Due to the expansion of the railway network, this number may increase, the study authors suggest. The results were presented in the Journal of Applied Ecology.