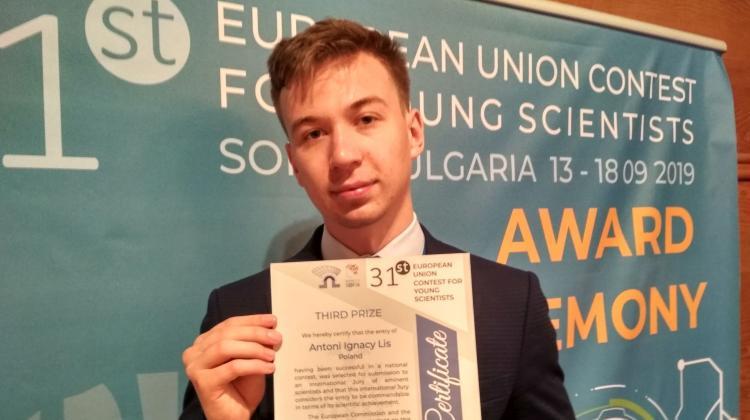 Antoni Lis won third prize at this year`s EUCYS 2019 contest for young scientists. The winners were announced on this week in the capital of Bulgaria, Sofia. A Polish team also won one of the additional prizes.

The European Union Contest for Young Scientists has been organized by the European Commission since 1989. The participants are the winners of national competitions. Project topics include science, natural sciences, technology, and recently also humanities and social sciences.

This year, the jury awarded four equal financial prizes for each from the first to the third places. A Polish project is among the winners.

One of the four third prizes was awarded to 19 years old Antoni Lis, a graduate of the J. Zamoyski High School no. 18 in Warsaw. He received 3,500 euros for his idea of using iron oxide nanoparticles in anti-cancer therapy.

"First and foremost, I feel appreciated and honoured. I am happy because the preparations were quite difficult. (...) We will see what doors it will open for me; I am very curious" - the winner told PAP. When asked about his strategy for the presentation of the project during the competition, he noted that it was important for him to show his work "with all its ordinary and extraordinary aspects". "It is certainly a great motivation" - he emphasised. He added that the cash price would allow him to pursue his interests.

The young chemist explained that his idea was to use iron oxide nanoparticles in anti-cancer therapy. Nanoparticles are supposed have a triple action. Firstly, they will transport the drug precisely to cancer cells; secondly - thanks to their magnetic properties - they are to be heated to a high temperature (about 40 degrees Celsius) and destroy tumour cells. The third element that is expected to lead to the destruction of the tumour is the incorporation of radioactive element in nanoparticles. Antoni Lis describes the combination of these three methods as "triple synergy".

The teenager spent dozens of hours in the laboratories of the Faculty of Chemistry of the University of Warsaw. In an interview with PAP, he emphasizes that this was possible only thanks to his participation in the internship as part of the "Young Chemist University" program. This initiative is aimed at enabling a faster entry of talented young people into the world of science. During the program, he became interested in nanotechnology.

The team composed of Łukasz Gałecki, Mateusz Mazurkiewicz and Jan Struziński received one of the additional prizes: a week stay at CERN in Geneva. The graduates of the of the Navy High School no. 3 in Gdynia designed and built the prototype of the glider drone Ikar.

"I`m happy. (...) A week at CERN is not something that everyone can experience" - Jan Struziński said after the results were announced. "I think we did a good job and the judges appreciated it" - he added.

"We are very happy that Poles - regardless of which country they represented - did so well" - he emphasized, referring to the additional prize awarded to the Polish woman Nadia Brzostowicz living in Spain, who represented that country in the competition. She will go on a trip to the Institut Laue-Langevin (ILL) in Grenoble, France. During the competition, she presented an acoustic levitator of her design.

The Polish group supervisor Prof. Jan Madey from the University of Warsaw, who represents the National Children`s Fund, told PAP that with such strong competition, the fact that two out of three Polish projects were been awarded should be rated "very good".

"Of course, we can always dream that there could be more, but it would be bad if we rested on laurels and thought that everything was achieved" - he commented. In his opinion, there were a lot of high-level projects in this year`s EUCYS finals.

"The involvement of young people in research work shows that, contrary to popular view that the situation is bad, hopeless - it certainly is not" - he emphasized.

The first four prizes (EUR 7,000 each) in this year`s EUCYS competition went to: Adam Kelly (Ireland) for their project on the simulation of general quantum systems; Magnus Quaade Oddershede (Denmark) for work on improving aircraft wings; Alex Korocencev and Felix Christian Sewing (Germany), who developed an innovative magnetic drive, and Leo Li Takemaru and Poojan Pandya (USA), who developed a method that can help fight HIV.

Four second prizes (EUR 5,000 each) were given to: Saba Gogichaishvili and Nia Gogokhia from Georgia for a project on biodegradable polymers that can be used in medicine; Claudia Lídia Pubill Quintillà (Spain) for her reflections on Miguel Quintillà; Olli Järviniemi (Finland) for a project about common prime divisors of polynomials; Jaehyun Lee (South Korea) for valve optimization.

Four third prizes (EUR 3.5 thousand each), in addition to the Polish representative, were awarded to: Océane Zofia Adrienne Patiny (Switzerland) for a remote-controlled cylinder project; Aliaksandr Piachonkin (Belarus) for considerations related to algebraic curves; a team from Austria: Noah Scheiring, Andreas Ladner and Tobias Schauer, who worked on the development of an innovative climbing block.

During the awards ceremony it was announced that next year`s EUCYS finals will take place in Salamanca, Spain.