Gniezno/ Archaeologists found a fragment of a unique pre-Romanesque building 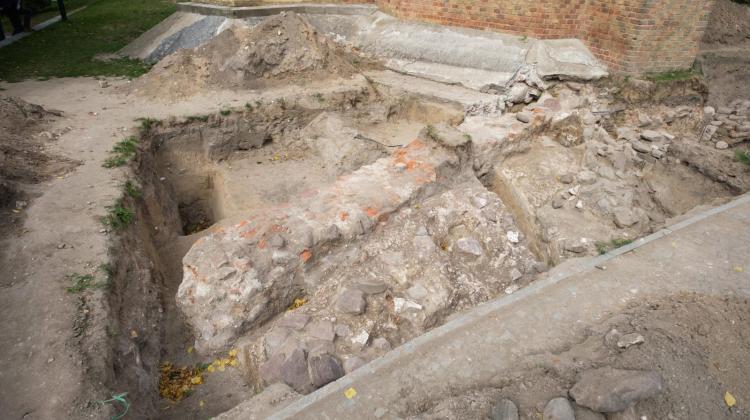 Archaeologists presented a fragment of the pre-Romanesque building located at the Church of St. George on Lech Hill in Gniezno, discovered during the work on the project "Palatium Expedition. Gniezno 2019". Photo: PAP/Jakub Kaczmarczyk 17.09.2019

A fragment of one of the earliest stone buildings in Poland was discovered on Lech Hill in Gniezno during excavations as part of the project "Palatium Expedition. Gniezno 2019". The structure dated to the 10th/11th century could be part of the residence of the first Polish rulers.

Researchers summarised the excavations at the Church of St. George, conducted by the Museum of the Origins of the Polish State in Gniezno.

According to lead researcher Dr. Tomasz Janiak, researchers uncovered a fragment of a corner of pre-Romanesque building; possibly part of the palatium - the residential and sacral seat of the first Polish rulers. Janiak remarked that "a unique object of great research and historical value" had been discovered.

"It is a pre-Romanesque building, one of the earliest stone buildings in the country, we date it to the 10th century - 1st half of the 11th century. It is difficult for us to say anything more about the function of this building. It could be the remains of an annex or chapel that was part of the earliest Gniezno palatium. Or it could be a corner of a free-standing church - the one in which, according to written sources, the relics of the Five Martyr Brothers were deposited" - said Janiak.

He added that there were many indications that this was a part of the pre-Romanesque gate leading to the interior of the princely stronghold, where the ruler`s seat was located. He emphasized that the pre-Romanesque stone gate was unique in Poland - relics of such a fortification are known only from Wawel.

"Analogies to such fortification solutions can be found in the German Empire; such representative gates were built only in the most important seats of the rulers of that time. If it really was a gate, then we have irrefutable proof of the importance of Gniezno; if there was such a representative gate, there isn`t a the slightest doubt that it also had to be the main seat. There is no doubt that Gniezno as the capital is getting another very important argument" - explained Janiak.

During the excavations, researchers also found the rubble - a dump of stones and mortar from the early Middle Ages, originating from the demolition of the pre-Romanesque stone building, and a fragment of a brick wall erected in the 16th century on the order of Archbishop Jan Łaski, that surrounded the former cemetery at the Church of St. George. The researchers emphasized that the study area had been levelled many times, which makes finding a clear trace of a large building impossible.

The end of excavations does not conclude the ongoing project. The head of the science department of the Gniezno museum Łukasz Kaczmarek explained that samples would be collected and photographs taken. After the exposed relics are secured with a special cover, the excavations will be covered. Then, the laboratory and office work will begin.

In recent days, a scientific seminar devoted to the importance of discoveries on Lech Hill was held in Gniezno. Dozens of specialists from all over the country attended the meeting.

"The effect of the meeting was a simple conclusion: what we have discovered is an extremely important find, expanding the small collection of pre-Romanesque relics in Poland. However, research, including excavations, should be continued. Perhaps the research in the church of St. George will bring more answers. Initial talks about the possibility of conducting excavations next year are already underway" - said Dr. Michał Bogacki, director of the Museum of the Origins of the Polish State in Gniezno.

Next year, conservation works are to be carried out at the church, during which flooring will be replaced. It will be a unique opportunity to carry out archaeological research inside the temple.

The museum representatives emphasized that research would not have been possible without the financial contribution of the Poviat Eldership in Gniezno and the City of Gniezno. In addition, the undertaking was financially or materially supported by Gniezno companies.