Four treasures in a line - a unique discovery from nearly 3,000 years ago 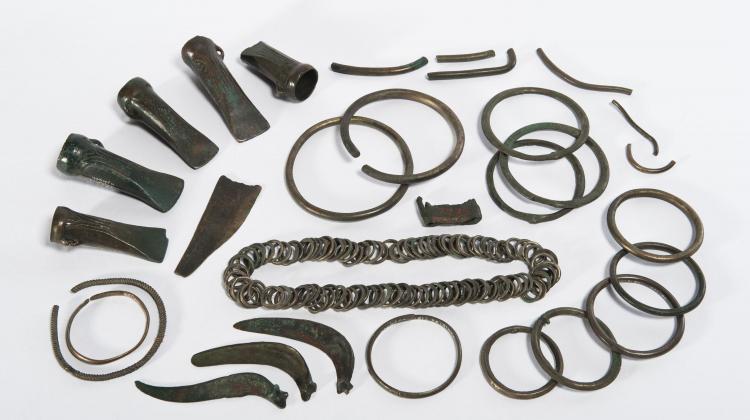 The first of four discovered treasures is currently in the Archaeological Museum in Wrocław, photo by Tomasz Gąsior

Four ceramic pots filled with dozens of tools, ornaments and weapons made of bronze, each 200 m away from another and arranged in a line, were buried nearly 3,000 years ago. Now archaeologists are trying to understand why this happened.

Three of the four treasures were found in the cultivated field at the turn of the 20th century. Today it is the area near the village of Postolin in Lower Silesia (formerly Germany) between Wrocław and Ostrów Wielkopolski, but in literature they are known as treasures of Karmin. The fourth treasure was discovered two years ago. Luckily, it was handed to the conservator.

"This is an absolutely unique situation, because we rarely know the location of discovered treasures from hundreds or thousands of years ago - these are most often discovered by random people" - says Dr. Justyna Baron from the Institute of Archaeology of the University of Wrocław, the leader of the Karmin treasures research project. The treasures were buried in the 8th century BC.

As part of research funded by the Ministry of Culture and National Heritage, scientists carefully examined several hundred bronze objects that were buried in pots, and analysed how they were deposited.

In their opinion, there could have been more items, but over the millennia they were scattered in the field as a result of agricultural activity. Some of them were probably collected by random finders. Today, most of the known items are in the Archaeological Museum in Wrocław, and some can be seen at the permanent exhibition.

The pots contained tools (axes and sickles), decorations (bracelets, pendants, rings), weapons (daggers and knives), and parts of horse harness. The analyses carried out for the purposes of the project show that their composition (even within one treasure) was very varied: the proportion of copper and tin, from which bronze was melted, was different. Some items were almost 100 percent copper; this surprised scientists.

"Copper is very soft metal. Such tools are not very practical" - the archaeologist emphasises.

The fact that caught the attention of experts was that these treasures had been deposited in one line and at regular intervals of about 200 m. Dr. Baron believes that such an arrangement of the treasure is absolutely unique not only in Poland, but also in Europe. An analysis of the items deposited in the ground shows that they were made around the same time, most likely within 2-3 generations. Therefore, they were not deposited at the same time. How then could they have been deposited in such a regular way?

"We believe that the deposition sites were marked and known to locals. Perhaps they were mounds or other structures, or characteristic elements of the natural landscape" - believes Dr. Baron.

The question about the reason for placing several hundred valuable objects in the ground near the crossing of the Barycz river remains open. In the opinion of the project leader, this is an example of marking extremely important places for a given community, for example borders, both man-made and natural ones.

Interestingly, the analysis shows that the sacrificed tools had been used, and quite intensively at that: the edges of knives, daggers and axes are strongly disfigured and blunt. In addition, the pots, in which they were deposited, were not beautiful. "These are typical pots used for cooking. On those we examined we noticed traces of lipids - organic compounds, but we do not know with what food they should be associated" - the researcher notes.

Archaeologists used 3D scanning to compare selected bronze objects. They wanted to determine whether the axes from one treasure was made in one form. This could be confirmed in several cases.

A specialist scientific publication on the latest analyses of the treasures of Karmin will be published this year. The book will be available online for free.