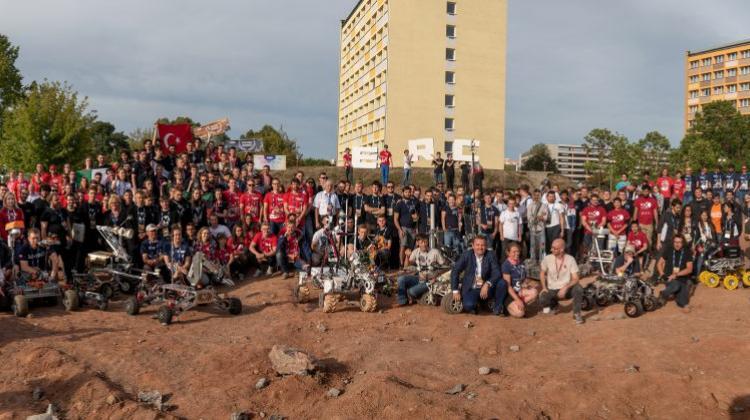 In the fifth edition of the European Rover Challenge 2019, the Impuls team from the Kielce University of Technology won for the second time in a row.

Participants of the European Rover Challenge (ERC) in Kielce designed and built Mars rovers that competed in field competitions similar to the tasks actually performed by robots on Mars or the Moon. During the competition, team members did not see their rovers equipped with cameras - they controlled the rovers remotely. The tasks included soil sampling and off-road driving. One of the competition tasks required the rover to reach the designated spot with its camera turned off.

"The most difficult competition was the autonomous one, in which we used vision systems, among other things, and there were problems, for example, with lighting. In addition, in this competition the operator cannot touch any operator instruments. Everything must be turned on and it must work perfectly" - told PAP member of the winning team Michał Sokołowski.

The second place in the competition went to the RoverOva team from the Technical University of Ostrava (the Czech Republic), and the third place to AGH Space Systems from the from the AGH University of Science and Technology in Kraków.

The European Rover Challenge (ERC) is a prestigious competition of Mars robots built by student teams. The ERC is the European version of the University Rover Challenge held in the United States. The first edition of the event was organized in 2014. On Friday, 28 teams and about 400 young constructors from 12 countries including India, Bangladesh, Canada, Columbia, Poland, Germany, Italy took part in the competition.

Prime Minister Mateusz Morawiecki, who attended the ERC 2019 awards ceremony in Kielce, congratulated the winners and all participants of the fifth edition. He emphasized that was done in Kielce, around the Kielce University of Technology and at many other universities, was something "wonderful".

He admitted that he had already heard that the Kielce University of Technology had beaten Stanford University in this competition. "This is an achievement of course, but it is also a great achievement to beat Ostrava and Kraków, on which I congratulate you" - he said.

"You are following in the footsteps of our best creators, engineers, those who built Polish industry in this land and in this part of Europe" - the prime minister said. He reminded that "in the Świętokrzyskie Land, in the heart of Poland, were the first steps of our industrial district, the Old Polish Industrial District". "Here in Kielce, Stanisław Staszic founded the first institution, university, technical academy in Poland" - he noted.

Addressing the rector of the Kielce University of Technology and students and participants of "this great European and global competition", Morawiecki said: "You are following in the footsteps of our best creators, engineers, those who built Polish industry in this land and in this part of Europe. I am convinced that these space inventions that we can see here behind me, this recreated surface of Mars, that they are on the one hand such a student or scientific departure into space, such a beautiful departure into space, but on the other hand they are building the most Earthly value for all people".

The Prime Minister drew attention to the inventions of 1997, including the Mars rover that flew to Mars. In his opinion, "all mankind has benefited" from that. He reminded that the results were three-dimensional maps, followed by many other inventions.