The European Rover Challenge in Kielce has begun 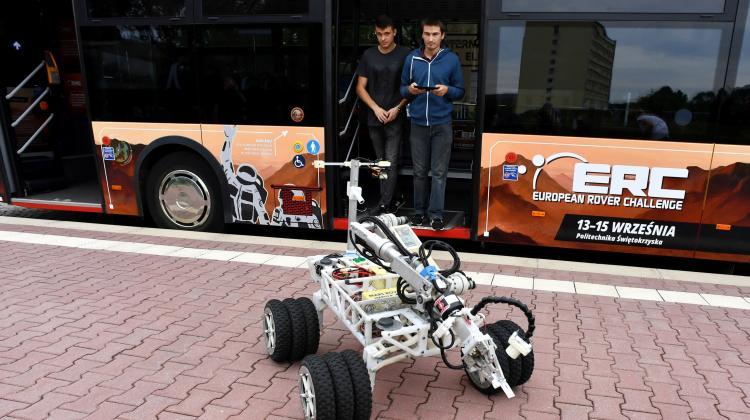 Kielce, 20.08.2019. The first Marsobus ride, Aug. 20 in Kielce. The passengers were participants of the press conference inaugurating the launch of the space vehicle promoting the European Rover Challenge. PAP/Piotr Polak

In Kielce, 28 teams of young constructors from 12 countries started the competition in the 5th edition of the European Rover Challenge. The event is accompanied by a space industry and business conference.

The finals of the fifth edition at the Kielce University of Technology (Kielce) will continue until Sunday.

President of the European Space Foundation (the main organizer of the event) Łukasz Wilczyński informed during a press conference that 28 teams had qualified for the competition, arrived and completed the registration procedure. Their members are approx. 400 young engineers from 12 countries, including India, Bangladesh, Canada, Columbia, Poland, Germany, Italy.

For the purposes of the competition, the Mars Yard reflecting part of the surface of the Red Planet was prepared on the university campus. According to Wilczyński, it is probably the largest artificial field of this type in the world. "The Mars Yard has been meticulously built. On a smaller scale, it reflects the authentic landing spot of Mars`s next NASA mission rover in 2020. The arrangement of stones and crater is not accidental. It is also the most geologically diverse Mars Yard" - he said.

ERC participants have designed and built Mars rovers that will participate in competitions similar to the tasks that robots actually perform on Mars or the Moon. During the competition, team members do not see their rovers equipped with cameras - they control the rovers remotely. The tasks include soil sampling or off-road driving. One of the competition tasks requires the rover to reach the designated spot with its camera turned off.

Last year`s ERC winner was the Impuls team from the Kielce University of Technology. This team also won this year`s URC. In this year`s ERC, the Kielce university is represented by two teams: the Impuls team and students from the science club Fupla. "It gives me great pleasure that the competition has attracted interest of a larger group of young people. One team represents the Faculty of Mechatronics and Mechanical Engineering, the other the Faculty of Electrical Engineering, Automatic Control and Computer Science. They are in a more difficult situation because they are the favourites" - said the Rector of the Kielce University of Technology, Wiesław Trąmpczyński.

The ERC also hosts an international industry and business conference, a meeting of representatives of the world of science and business, interested in the use of space and robotic technologies (participation in the event required prior registration).

The speakers will include representatives of the European Space Agency (ESA), the Polish Space Agency (POLSA), the German Space Agency (DLR) and leading European and Polish space industry companies. The conference guests include Steve Jurczyk from NASA management.

The ERC is an open event with free admission for all viewers. Nearly 40 exhibitors are waiting for space, robotics and science enthusiasts of all ages in the Science and Technology Shows area.

The youngest science enthusiasts can participate in mini-rocket and stratospheric balloon building workshops, see hologram shows or try their hand at controlling a drone. At the Austrian Space Forum area, children can also try on an astronaut`s outfit, and after completing a few simple dexterity tasks, they will receive a commemorative diploma.

For older space fans, the organizers have prepared a series of popular science lectures, VR demonstrations and a presentation of systems used to build rockets and Mars robots. Visitors will also see presentations of Polish devices created by space sector companies that are used in space missions of the ESA (European Space Agency) and NASA. There will also be film screenings.

Demonstrations of experiments have been prepared, among others, by Wiktor Niedzicki, the author of the TV series "Laboratorium" popular in the 1980s and 1990s. The ERC guests will also include well-known science promoters: physicist and scientific journalist Dr. Tomasz Rożek, creator of the fanpage "Z głową w gwiazdach" ("Head in the Stars") Karol Wójcicki and Piotr Kosek from the online show "Astrofaza".

ERC 2019 is co-organized by the European Space Foundation, the Special Economic Zone "Starachowice" S.A., Mars Society Polska, Świętokrzyskie Voivodship, Kielce University of Technology in cooperation with the city of Kielce and the Kozminski University.