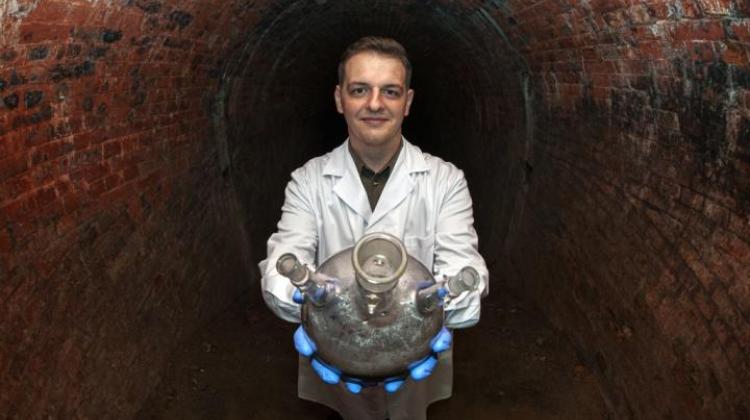 There`s nothing new in treating water by sorption of organic solvents such as trichloroethylene (TCE). But finding a method that neutralizes these contaminants, instead of just shifting them somewhere else, is no mean feat. A team led by Anna Śrębowata, professor at the IPC has improved a method of catalytic hydrotreatment, that is, transforming TCE into hydrocarbons that are environmentally less harmful. Thanks to scientists from the IPC PAS, not only the water in our taps, but also in our rivers, can be cleaner and safer for human health.

Clean water is a treasure, but also a resource that is becoming more and more scarce. Various contaminants are widespread, and some are extremely difficult to remove. Such pollutants include trichloroethylene (known in Poland as TRI). This organic solvent used to be commonly used in, amongst others, organic syntheses, dry cleaners and for the industrial degreasing of metals during their processing. Due to its negative impact, its use has been officially banned since 2016. However, considering its stability, it may remain in both the water and soil for many years to come, explains MSc. Emil Kowalewski, a member of the team that developed the innovative method of removing this compound from water. The project is part of a global trend focused on the protection of water resources. The research may be of interest to wastewater treatment plants and become a potential starting point for the development of innovative water treatment systems. Why?

Today`s wastewater treatment plants are systems consisting of many physical, chemical and biological processes, but they effectively eliminate mainly conventional pollutants. Others may remain in the water if their concentrations are high enough. "Meanwhile, trichloroethylene should not be in water at all, because it is mutagenic, carcinogenic, teratogenic...", says the scientist, "and what`s more, extremely long-lasting. It accumulates and stays at the bottom of reservoirs, and since its solubility in water is very poor, it can remain harmful for many years to come."

"Today we deal with such compounds mainly by the process of sorption. However, in this way we`re only transferring the threat from one place to another. An attractive solution seems to be catalytic hydrotreatment, i.e. transforming the TCE into less harmful hydrocarbons. However, in order to fully exploit the potential of this method, it was necessary to develop an efficient, stable and cheap catalyst," says Dr. Anna Śrębowata, professor at the IPC.

"Previously, we carried out research with palladium catalysts. They were effective but expensive," smiles Emil Kowalewski. The new nickel catalysts, developed at the IPC PAS, allow for a cheap and effective method of conducting the process of water treatment in flow mode, and at the same time they are easy to synthesize. "Using a catalyst in which nickel nanoparticles with a diameter of about 20 nm are deposited on the surface of activated carbon, we combine the sorption properties of carbon and the catalytic activity of nickel," explains Emil Kowalewski. In their research, the scientists from the IPC PAS also showed that nickel nanoparticles deposited on activated carbon with a partially ordered structure show higher activity and stability than an analogous catalyst based on a support with amorphous structure

The scientists are, however, proudest of the innovative element of their research - introducing of the flow technology to the water purification from TCE. Thanks to this the parameters of the process can be optimized, the amount of waste can be reduced, and at the same time catalysts which were inefficient or even ineffective in batch reactors (i.e. where a specific batch of product is treated at one time) can be used. "This was the case with our nickel catalyst," says MSc. Kowalewski. "Without flow technology its capacity to utilize TCE declined in time, the catalyst underwent poisoning. In the flow reactor, even after 25 hours, we did not observe any decrease in activity, although we conducted research on concentrations about 8000 times higher than the Polish standards of its content in drinking water.

Where can the innovative method be used? Above all in water and wastewater treatment plants. Wherever we want the water reaching the end user to be clean, regardless of whether it`s a user of tap water or a fish floating in the river.

And what should be done with the products of the hydrotreatment of water to remove trichloroethylene? "The resulting compounds are hydrocarbons, mainly ethylene. But it`s not enough for a banana maturation plant," smiles the scientist half-jokingly. "It will simply escape..."

"This publication is part of a project which has received funding from the European Union`s research and innovation programme "Horizon 2020" under contract no. 666295 for co-financing and from funds for science in 2016-2019 allocated by the Ministry of Science and Higher Education for the implementation of an international co-financed project."