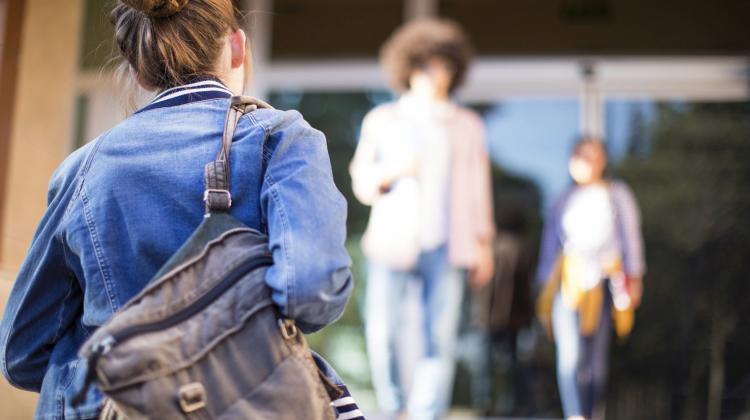 Psychologists have investigated the abusive language students use towards each other. It turns out that at school girls are more often called names related to intellect and boys - those related to sexuality. This shows which topics are important in both these groups and what hurts more, says Dr. Mikołaj Winiewski.

"Our research concerned how young people talk about verbal violence and bullying at school. We wanted to see if invectives are adjusted to the recipient and whether they have different objectives depending on the situation" - says Dr. Mikołaj Winiewski from the Faculty of Psychology of the University of Warsaw.

Research shows that boys hear different invectives than girls. The results were published in the journal School Psychology International.

While girls most often hear invectives concerning their intellect (offensive terms referring to someone`s stupidity and the fact that they could not cope), boys are most often targets of invectives related to sexuality (including terms related to sex organs, sexual activities or sexual orientation), the study shows.

"During this period of development, different things are painful for boys, different for girls" - comments Dr. Winiewski.

He explains that a sense of agency is crucial for girls at this point: feeling capable, smart, skilled. "If they hear that they are stupid or that they can not handle something, they may feel that they are being deprived of this agency. And that is why it is so painful for them" - the psychologist says.

Insults concerning boys, in turn, refer to the sphere of sexuality. "This may be due to the stage of development, in which the young people are at this point " - comments the psychologist. He explains that this is the moment when boys find out about their sexuality and the hormones are raging. They are only building confidence in their sexuality and questioning it can be perceived as an attack.

"One of the functions of verbal violence is building a hierarchy" - says Dr. Winiewski. He comments that among young people, it is a moment when girls spend more time with girls and boys with boys. "Hierarchies in groups of boys and girls are built in a different way. As a result, invectives used in each group are different and have slightly different functions" - Dr. Winiewski interprets the results.

"Our research shows that young people catch a whiff of a certain social structure and adapt their offensive language accordingly" - the researcher notes.

The psychologist explains that conclusions about how to counteract the effects of bullying can be drawn from the study. In his opinion, different measures may be effective for girls and different for boys. "The paths should be different here" - he says.

For example, measures aimed at restoring a sense of agency may be more important for girls. And in the case of boys - activities related to building confidence in their sexuality, also as part of sex education classes.

The study was conducted in several schools in Mazury (junior high and high schools). Some respondents were asked to write what could happen to Kacper (a boy), who returned sad from school. The second part of the respondents got an analogous task, except it concerned Ada (a girl). The idea was to see which difficult situations girls and boys encountered at school. "The vast majority of stories concerned bullying, peer violence. Only a few mentioned student-teacher relationships" - Dr. Winiarski summarises the results.

The second task was to list abusive names and invectives they most often encountered recently. "We asked for 10 invectives, but some students wrote out many more than we asked for" - smiles Dr. Winiewski.

Researchers divided invectives into different categories: offensive (for example a vulgar word for `go away very quickly`), sexual (related to sexual organs, sexual behaviour, sexual orientation), xenophobic (referring to foreign groups, including ethnic ones - Roma, Germans, Turks), related to intellect (for example idiot, fool), dehumanizing (for example pig) or referring to appearance, physicality (for example the fact that someone is not well dressed or physically unattractive).

In the responses of young people, sexual and intellectual invectives were most often mentioned (30% of all responses each), and less often xenophobic, dehumanizing, appearance-related or offensive ones.

In addition to Dr. Winiewski, Magdalena Świder (who wrote her master`s thesis on this subject) and Dr. Magdalena Budziszewska from the University of Warsaw were involved in the research project.