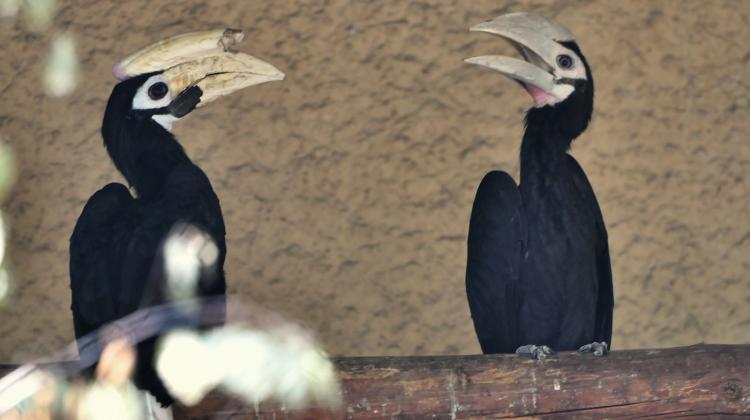 Another, fourth chick of the Palawan hornbill hatched in the Wrocław Zoo. So far, no other zoo in the world has managed to breed this endangered species.

The Wrocław Zoo spokeswoman Joanna Kij emphasized that the Palawan hornbills are among the least known and most endangered bird species. "The consensus is that they have no chance of surviving the next 10 years in the wild. That is why a conservation breeding program in zoos began seven years ago" - she explained.

The breeding pair of Palawan hornbills came to the Wrocław Zoo in 2012 as young, two-year-old birds. "A breakthrough in their conservative breeding took place three years ago. We managed to achieve hatching of the world`s first chick in the zoo" - the spokeswoman said.

"Last year, three chicks hatched in Wrocław, and on May 7 this year another bird hatched. Wrocław hornbills are now almost 90 percent of the world`s population living in the zoo. For now, the other centres that also attempt to breed this species (the zoos in Athens and Pilsen) are unsuccessful" - she added.

"Over the first years we watched birds and verified what we already knew. For example, we managed to develop a diet that suited them" - explained Krzysztof Kałużny, bird keeper at the Wrocław Zoo.

He added that this species has unusual nesting habits. The male seals the female in a tree hollow for the breeding period, leaving only a small hole to feed her. The female leaves the hollow only when the young are ready to fly away and reach adult size. "We also investigated the substance the male uses to seal the hollow, which is extremely important for reproduction. The secret was a mixture of excrement and digested fruit" - explained the bird keeper.

Wrocław Zoo employees point out that if this success can be repeated in other zoos, the species will have a better chance of survival.

The Palawan Hornbill is a forest bird. It grows up to 70 cm in length and reaches a body weight of 700 g. Its feathers are black except for the tail, which is white. It is distinguished by a bright yellow beak and a "helmet".

The Palawan hornbill is endemic to Palawan island and five surrounding satellite islands. Researchers note that its population decreases rapidly from year to year, and the main reasons are the destruction of habitats by deforestation and fragmentation, as well as poaching and illegal trade. (PAP)