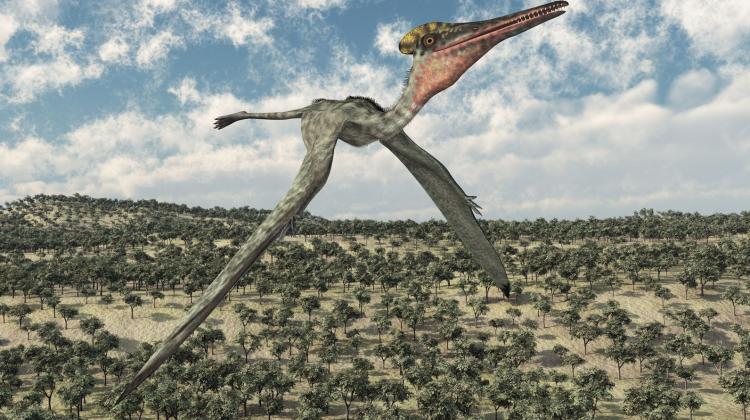 Pterosaurs from 150 million years ago filtered food just like today`s flamingos do, Polish and Swedish scientists write in the journal PeerJ.

Flamingos filter small creatures from the water, which is evident in the composition of their droppings, full of residues of microscopic organisms. Pterosaurs living in the late Jurassic, 150 million years ago, fed in a similar manner, say scientists including Grzegorz Niedźwiedzki and Krzysztof Otwocki, from the University of Uppsala (Sweden) and the Institute of Paleobiology of the Polish Academy of Sciences in Warsaw.

Pterosaurs formed a diverse group of flying reptiles that roamed the skies in the age of dinosaurs. Their skeletons suggests that they were adapted to different types of environments and to varied food, as can be seen today in birds.

Unfortunately, it`s not often possible to get direct evidence of what their diet looked like. Findings such as the contents of the stomach of a pterosaur are rare. In turn, coprolytes, petrified droppings, are common, but it is difficult to link them to a specific type of animal.

In the latest publication, Polish and Swedish scientists describe three coprolytes found in a mine in Wierzbica. They were on the surface covered with tracks of pterosaurs. According to palaeontologists, the faeces come from pterosaurs of the Ctenochasmatidae group.

The fossils were X-rayed with a synchrotron, a device that emits strong X-rays. As a result, researchers were able to prepare three-dimensional images of the interior of coprolytes.

Researchers believe that filtering food is the best explanation of the fact that relatively large pterosaurs ate such fine food. They were the flamingos of the late Jurassic.