Researchers: 1,400 people could listen to speeches at the Roman Forum 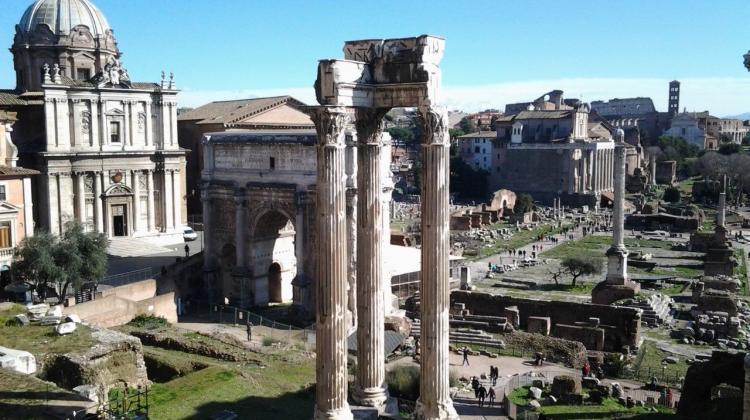 Even more than 1,400 people could listen to speeches of politicians, and later also of the emperor, delivered at the Roman Forum, the main political and religious centre of ancient Rome, researchers from Kraków determined based on acoustic analysis.

Today, the Roman Forum are picturesque ruins in Rome, but about 2,000 years ago the square was surrounded by numerous monumental temples and a triumphal arch. It was an important place of civil and economic life, especially during the republican period, the first centuries BC.

It was there that the most important public ceremonies and assemblies were held, during which Roman politicians discussed draft laws previously submitted during the Plebeian Councils, and presented their candidatures for offices to the Roman people. During the empire years, when practically all power was in the hands of the emperors, they would sometimes also give speeches there.

In their research, experts from Kraków took into account not only the geometry of space, but also the materials used to build the platforms and surrounding buildings - these factors affect the acoustic properties of space. There were several places - podiums where Roman politicians could stand and speak. They were either rostra (platforms specially designed for speeches, decorated with rams that were captured on enemy ships) or the podium of the Temple of Castor and Pollux.

"Depending on the method of estimation (...) between 357 and 375 people could hear speeches from the podium of the Temple of Castor and Pollux, and those given from the rostra could be heard by between 336 and 351 people. Reducing the level of background noise significantly increased the number of potential recipients to 1284-1383 for speeches delivered from the temple podium and to 1323-1423 people for speeches delivered from the rostra" - says Dr. Kamil Kopij from the Institute of Archaeology of the Jagiellonian University in Kraków. The analyses were conducted in cooperation with Dr. Adam Pilch from the AGH University of Science and Technology in Kraków.

According to some scientists, the speeches politicians gave from these podiums were a key part of lawmaking. When the legislator saw that he would not find support among the people, he would withdraw the project to avoid being exposed to severe failure during the vote, Dr. Kopij says.

"Written sources do not say much about the number of people gathered. The shreds of information we have on this subject do not go beyond the general statements that it was a small or large, quiet or noisy crowd. To answer this question and determine the number of people who could hear the speech well from one of the platforms, it was necessary to determine the acoustic properties of these places" - adds Dr. Kopij.

The simulations were carried out for two background noise values: noise comparable with low traffic (49 dBA) and the sound of a working fridge (55 dBA). Measurements for the rostra concern the period of the late empire, and the podium of the Temple of Castor and Pollux - the republican period. Scientists wanted to focus their research on earlier times only, but due to the large transformation of the area, this was not possible.

The analyses of Polish scientists not only show the number of potential recipients who could understand speech, but also the fact that when the crowd was quieter, the rostra had better acoustic properties that maximized the number of recipients. In turn, when the background noise level was higher, it was better to speak from the podium of the Temple of Castor and Pollux.

The article presenting the findings of Polish researchers was published in Open Archaeology.