Mini-EUSO flies into space: Earth as a great detector 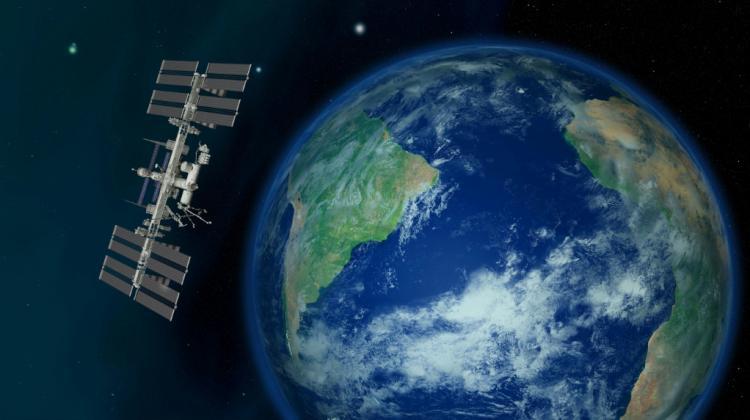 The Mini-EUSO telescope was launched into space this week on the Soyuz 2.1a rocket. The device will be placed on the International Space Station and allow to map the ultraviolet background produced by Earth atmosphere. Polish researchers take part in the international program.

On August 22, the Soyuz 2.1a rocket carrying the Soyuz MS-14 module towards the International Space Station (ISS) was launched from the Bajkonur spaceport in Kazakhstan.

Its cargo includes the Mini-EUSO telescope. The device will allow to map the ultraviolet background produced by Earth atmosphere and observe its variability in time. The project, in which Polish scientists from the National Centre for Nuclear Research participate, is the preliminary stage of the international JEM-EUSO mission - the study of large air showers of particles and photons. The National Centre for Nuclear Research representatives informed about the project in a release sent to PAP.

Air showers are cascades of particles and photons formed as a result of the interaction of high-energy cosmic particles (with energy of the order of 1011 GeV and greater) with the Earth`s atmosphere. Their research is carried out by the JEM-EUSO (Joint Experiment Missions - Extreme Universe Space Observatory) mission. An international team of scientists wants to create a new type of observatory based on a very large UV telescope in orbit around the Earth, for which the entire Earth will constitute a detector. The telescope will observe traces of fluorescence caused by air showers.

The Mini-EUSO (Multiwavelength Imaging New Instrument for the Extreme Universe Space Observatory) mission is part of JEM-EUSO. "The detector sent to the International Space Station will allow to map the ultraviolet background produced by Earth atmosphere" - says Dr. Jacek Szabelski from the Astrophysics Division of the National Centre for Nuclear Research. He explains that scientists want to conduct detailed studies of variability of the atmosphere`s ultraviolet radiation over time.

JEM-EUSO is a multi-stage project. The data collected by the Mini-EUSO detector will provide valuable information before key research stages when target detectors will be placed on one of the modules of the International Space Station.

Three stages of the project have already been completed: the EUSO-TA ground fluorescence detector was installed in 2013 at Black Rock Mesa in Utah, USA; later the EUSO-Ballon, a stratospheric balloon equipped with a detection module, took a 5-hour flight; and in 2017 the EUSO-SPB (Super Pressure Balloon) performed measurements for 12 days.

"Mini-EUSO will more accurately determine the background and conditions of measurement and clarify the equipment settings for the target experiment" - explains Marika Przybylak from the Astrophysics Division of the National Centre for Nuclear Research.

The Mini-EUSO`s journey to the International Space Station will take about two days. The equipment will be installed in a special, UV-transparent window of the Russian station module. "The window will be positioned parallel to the Earth`s surface throughout the entire passage of the station, thanks to which it will be possible to register ultraviolet radiation emitted from the atmosphere above the surface of the globe" - explains Dr. Szabelski.

He describes that the device consists of a telescope with a large field of view, based on an optical system using two Fresnel lenses. UV rays are recorded with a detector consisting of a photomultiplier matrix. Mini-EUSO will be able to register 400,000 frames per second, allowing to observe the dynamics of radiation level changes. "The device is one of the fastest systems currently monitoring the fluorescence of the atmosphere. The collected data will be sent on storage media during transport flights from the station to Earth, because such a large amount of data could overload the ISS data transmission system" - describes Dr. Szabelski.

306 scientists from 16 countries participate in the JEM-EUSO project. The National Centre for Nuclear Research is represented by six scientists from the Łódź Cosmic Ray Physics Lab of the Astrophysics Division.

"We have built a high voltage power supply that works with each component of the system" - says Dr. Szabelski. "It was not an easy task, because the whole device must respond to radiation intensity changes, which it registers" - adds Przybylak. This system protects the detector against overloading and allows for stable measurements.