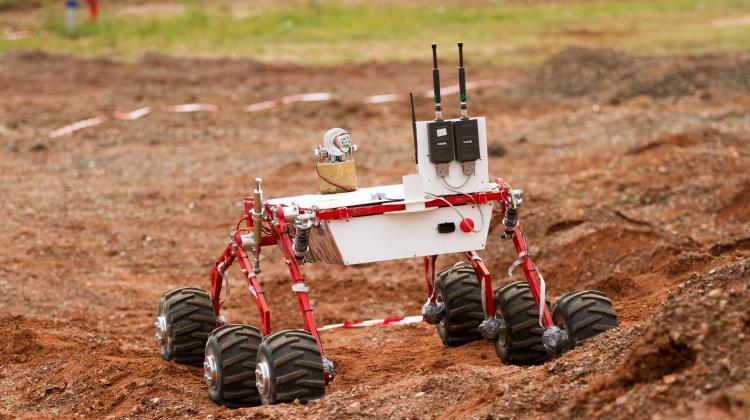 In Kielce, representatives of the board of the Świętokrzyskie province authorities and the European Space Foundation signed the agreement on the co-organization of the 5th edition of the European Rover Challenge and the accompanying mentoring and business conference.

The event will take place on 13-15 September at the Kielce University of Technology.

During this year`s edition of the ERC, students from all over the world have been traditionally invited to the competition (ERC Student formula). 40 teams from 15 countries have qualified. Among the finalists are representatives of Germany, Canada, the UK, Poland, Turkey, India, Columbia and Australia. Just like last year, the organizers have also planned a competition for professional teams (the ERC PRO formula).

"Today there is no economic development without the cooperation between the business sector and science. The technologies used in Mars rovers, prepared by individual teams, are the foundation for the transfer of this technology to various industries" - added the Deputy Marshal Renata Janik.

The financial contribution of the Świętokrzyskie province as ERC co-organizer is PLN 100,000. After the completion of the undertaking, the regional government will receive a report on the potential of Świętokrzyskie enterprises in the area of the Polish space sector development.

The President of the European Space Foundation (the main organizer of ERC) Łukasz Wilczyński presented the assumptions of the mentoring and business conference, which would be organized as part of the ERC on 13 and 14 September. According to Wilczyński, it raises the prestige of the competition.

The conference will be a meeting of representatives of the European world of science and business interested in the use of space and robotic technologies.

The conference will cover two main topics. The first is business and entrepreneurship. "We will also want to talk about how companies - primarily from the Świętokrzyskie region - can exist in the sector or for the space sector. We will present several examples of Polish companies already active (in this field - PAP)" - noted Wilczyński.

Case studies of space technology implementations in the medical and ICT sectors will also be presented.

The second main topic of the conference is space robotics, including the development of the European robotics cluster PERASPERA (to which the Polish Space Agency belongs), commercialisation opportunities for academic projects and terrestrial use of rovers, for example in agriculture, mining or military and law enforcement.

Wilczyński announced that the conference would be attended by Steve Jurczyk from NASA management, representatives of the PERASPERA cluster management, head of robotics at ESA (European Space Agency), robotics directors of large space sector companies.

Workshops for participating teams and entrepreneurs will be organised as part of the conference.

Admission to the conference is free, it only requires registration via the website.

The 5th edition of the European Rover Challenge is an open event with free admission for all viewers. In the Science and Technology Shows area, space, robotics and science enthusiasts of all ages will have access to dozens of tents full of attractions, including demonstrations of scientific experiments, robotic construction workshops, hologram simulations and race car drives. Visitors will also see presentations of Polish devices created by space sector companies that are used in space missions of the ESA (European Space Agency) and NASA.

ERC 2019 is co-organized by the European Space Foundation, the Special Economic Zone "Starachowice" S.A., Mars Society Poland, Świętokrzyskie province, the Kielce University of Technology in cooperation with the City of Kielce and the Kozminski University.

PAP Science in Poland is one of the media sponsors of the competition.

The first two editions of the ERC were held at the Regional Science and Technology Center in Podzamcze Chęcińskie near Kielce. The organizing committee moved the third edition to Jasionka near Rzeszów (province Podkarpackie). Last year, the event returned to the Świętokrzyskie province and took place in mid-September at the Museum of Nature and Technology in Starachowice.

The winner of the last year`s ERC was the Impuls team from the Kielce University of Technology. This team also won this year`s URC competition.

The mission of the European Space Foundation is to promote science, knowledge and support research projects related to space technology, engineering and astronomy. The foundation is active in the field of cooperation and transfer of knowledge between enterprises and institutions. It is a non-profit organization.