The Milky Way in 3D from Warsaw astronomers 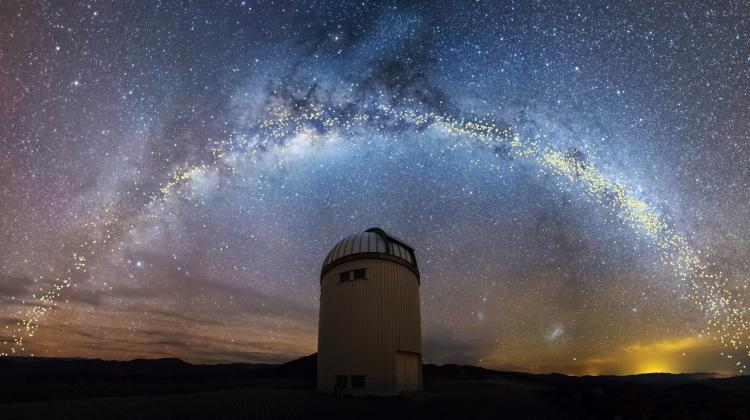 Warsaw Telescope and Cepheids in the Milky Way discovered by the OGLE sky survey (K. Ulaczyk / J. Skowron / OGLE / Astronomical Observatory of the University of Warsaw)

A unique 3D map of the Milky Way was presented in the prestigious journal Science by scientists from the Astronomical Observatory of the University of Warsaw working in the Optical Gravitational Lensing Experiment (OGLE) project. The map provides new information on the history of our galaxy.

The map created by Polish astronomers presents a precise image of our Galaxy and provides a lot of new information about the structure and history of our star system, the OGLE project leader Prof. Andrzej Udalski informs in a press release sent to PAP.

Already in the 17th century, astronomers were aware that Earth, the Sun and the planets in the Solar System together with the billions of stars visible through telescopes formed our Galaxy. The light of these stars, watched away from the lights of civilization, merges and takes the shape of milk spilled in the sky, forming the Milky Way. Describing the actual shape and structure of the galaxy based on observations from within it is not an easy task.

Astronomers imagine our galaxy as a typical spiral galaxy with a central bar, consisting of a central, thicker part containing an oval bar, surrounded by a flat disk made of gas, dust and stars. The disk consists of four spiral arms, and its diameter is about 120 thousand light years. The Solar System is located inside the disk at a distance of about 27 thousand light years from the centre of the Galaxy. Therefore, the disk stars viewed from this place look like a thin, pale glow in the sky - the Milky Way belt.

Relatively young (younger than 250 million years) stars called classical Cepheids are ideal for mapping the Milky Way. They are pulsating supergiants, whose brightness changes in a very regular way with a period from several hours to several dozen days.

"Based on the period of pulsation, we can determine the actual brightness of a Cepheid and, by comparing it with the observed star`s brightness, accurately calculate its distance" - explains Dr. Dorota Skowron, the leader of the team that prepared the map of the galaxy and the lead author of the publication in "Science" (doi: 10.1126 / science.aau3181). "Some difficulty in getting accurate results is the absorption of light between the star and the Earth-based observer, but astronomers deal with this problem by performing infrared observations where absorption is very small. Distances to Cepheids can be determined with an accuracy better than 5 percent" - adds Dr. Skowron.

The latest map of the Milky Way presented by the OGLE team is based on data on over 2,400 Cepheids. Most of them are objects newly discovered thanks to observations conducted as part of the OGLE project at the Las Campanas Observatory in Chile.

Warsaw Telescope and Cepheids in the Milky Way discovered by the OGLE sky survey (K. Ulaczyk / J. Skowron / OGLE / Astronomical Observatory of the University of Warsaw)

"The OGLE project is one of the world`s largest photometric surveys of the sky, regularly observing over two billion stars. Collections of various types of variable stars, including Cepheids from our galaxy and neighbouring Magellanic Clouds, are among the largest in modern astrophysics and constitute the basis for various studies of the Universe" - explains head of the OGLE project Prof. Andrzej Udalski.

The map based on the analysed Cepheids shows the actual distribution of the young star population in the galaxy. It is the first three-dimensional map created on the basis of direct distances determined for individual objects. Precisely determined distances of the Cepheids filling the galactic disk to its ends allow for an accurate analysis of the structure of the galactic disk. The Sun is about 50 light-years above the disk plane. The map shows that the galactic disk is flat to a distance of 25,000 light years from the centre of the galaxy, and at larger distances it warps.

Cepheids change brightness in a very regular way due to star pulsations (P. Mróz / OGLE / Astronomical Observatory of the University of Warsaw)

"Disk warp was suspected many years ago, but it is only now that for the first time we can use individual objects to study its shape in three dimensions" - explains Przemek Mróz, a PhD student at the University of Warsaw who studies the parameters of the galaxy disk. Stars in the outer parts of the Milky Way`s disk can be shifted by up to 4,500 light years from the disk plane defined in the central regions of the galaxy. Disk warp can be caused by interactions with other galaxies, influence of intergalactic gas or the so-called dark matter. 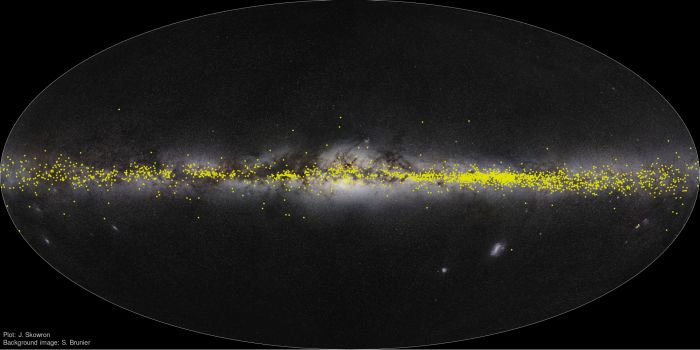 The determination of precise distances to such a large sample of Cepheids in combination with measurements of their speed by the European Gaia satellite also enabled the construction of an exact rotation curve of the galaxy - the dependence between the orbital speed of stars around the centre of the Galaxy and their distance from the centre.

"Our galaxy rotation curve goes far beyond the scope of previous research and confirms the constant orbital speed of stars, practically up to the boundaries of the disk" - adds Przemek Mróz. This shape is one of the basic arguments for the existence of dark matter in the galaxy. 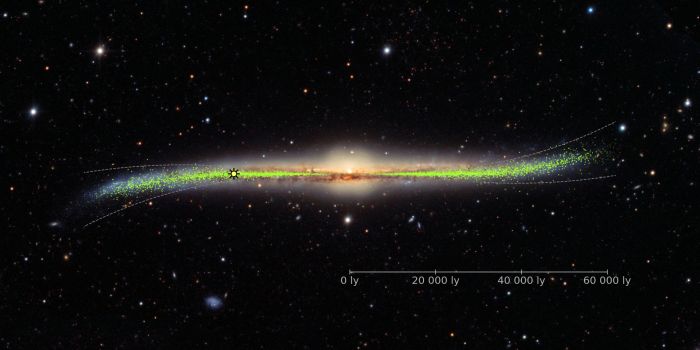 Image of the galaxy with a curved disk. The dots correspond to the positions of Cepheids in the Milky Way (J. Skowron / OGLE / Astronomical Observatory of the University of Warsaw)

The age of Cepheids is correlated with their period of pulsation. Based on this, it is possible to perform a tomography of the age of Cepheids in our galaxy. It turns out that a number of clear structures visible on the map have a similar age. Younger Cepheids are closer to the centre of the galaxy, and the oldest at its outskirts.

"The similar age of the structures indicates that they must have formed at a similar moment in the past, in one of the spiral arms of the Galaxy. Their today`s disk distribution and partial blurring is the result of different rotation speeds of spiral arms (gas structures, in which young stars, including Cepheids, are formed) in the galaxy, and star rotation" - notes Dr. Jan Skowron, co-author of the paper in "Science". 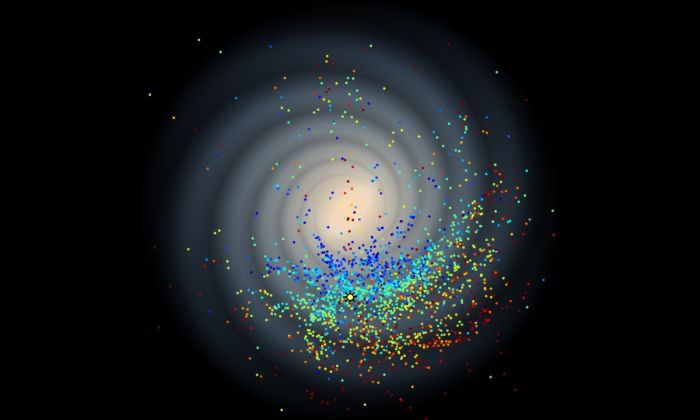 To test this hypothesis, a simple model of the formation of individual structures was built. In the spiral arms of the Galaxy, episodes of star formation were inserted at various times in the past and the resulting stars were assigned typical own motions and rotation speed. Researchers examined how the Cepheids formed millions of years ago in fragments of spiral arms would be located in today`s galaxy. 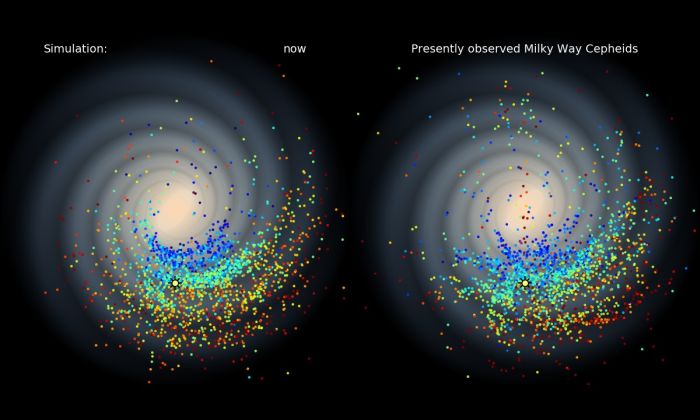 Comparison of observed Cepheids and results of the simulation of star formation in the spiral arms of the galaxy. The oldest marked (red) stars formed 400 million years ago, the youngest (blue) - 30 million years ago (J. Skowron / OGLE / Astronomical Observatory of the University of Warsaw)

"The simulated and observed structures in our galaxy are strikingly similar. So we can conclude that our model of galactic disk history is possible and is can explain today`s structures that we see in it" - Dr. Skowron summarises the results of modelling.