The mass of particles is not given once and for all! It depends on the environment and can change, even in conditions such as those that prevail in collisions of neutron stars, researchers confirmed in the HADES experiment. The study sheds new light on where particles get mass.

Alchemists tried to produce gold using a philosopher`s stone. In the HADES (High Acceptance Di-Electron Spectrometer) experiment, an international team of scientists including Polish researchers does the opposite: transforming gold into another type of matter. Scientists accelerate the nuclei of gold atoms to unimaginable speeds (approx. 89 percent of the speed of light) and collide them with other gold atoms. The energy of such collisions is so huge that the nuclei disintegrate into a set of different particles. Although the gold is lost forever (fortunately, these are only trace amounts), scientists are able to study what happens to particles inside the exotic, produced for a very short time, form of nuclear matter with extreme densities and temperatures.

Now physicists have shown something incredible: the mass of particles under extreme conditions changes! Its value is not as constant as it would results from tables and textbooks, but instead depends on the properties of the environment determined by density and temperature! This could be verified thanks to the analysis of distribution spectra of virtual photons: photons that have ... mass. These photons come from the decay of a particle called the rho meson.

Similar measurements had already been made earlier at CERN and at the RHIC accelerator in the US. But now scientists at the GSI/FAIR Center for Heavy Ion Research in Darmstadt, Germany (near Frankfurt) have shown that a similar effect occurs not only in such extreme conditions as those just after the Big Bang, but also today, for example in neutron star collisions. The publication appeared in "Nature Physics".

PROPERTIES OF THE GOLDEN FIRE BALL

A member of the HADES experiment Prof. Piotr Salabura from the Institute of Physics of the Jagiellonian University describes what happens when the matter of one nucleus penetrates the matter of another nucleus. He says that in a moment 1022 times shorter than a second, a "fireball" forms, in which the density of matter increases up to 4 times (the density of normal nuclear matter is still huge: it`s about 1018 kg/m3).

The scientist says that as part of the experiment, it was possible to measure the temperature of this "fireball." A few decades ago, to check if a person had a fever, you had to hold a thermometer under that person`s arm for 10 minutes ... And now the scientists have been able to accurately measure high temperature in a moment 1022 times shorter than a second, in a place no larger than the nucleus of an atom! For scientists it was not obvious that a specific temperature could be established in such a short time. 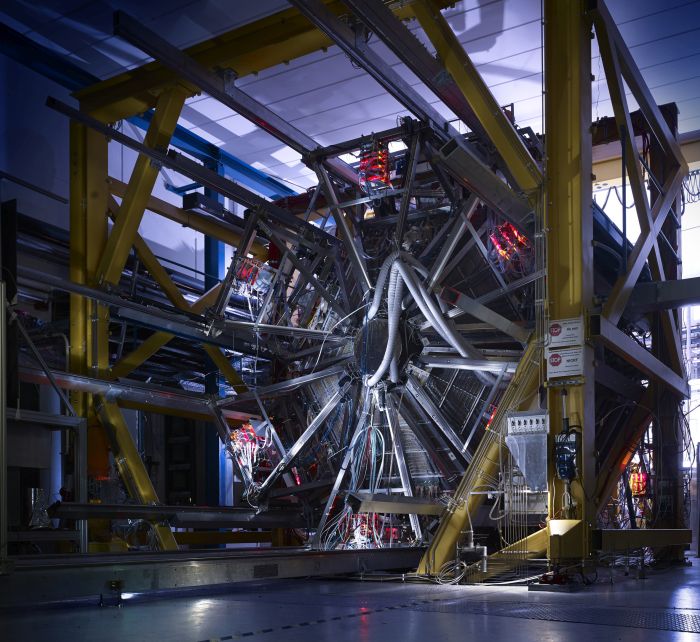 Research has shown that the average temperature of such a "golden" collision is about 70 MeV (megaelectron volts), that is, approx. 10 trillion (1022) Kelvin! "Nuclear matter with similar properties forms during collisions of neutron stars, giant events that we sometimes observe in the universe" - he compares.

"Virtual photons differ from ordinary photons only in that they have mass for an extremely short period of time. And then, according to Heisenberg`s uncertainty principle and Einstein`s theory, the transformation of energy into mass is possible and photons are observed in the HADES detector in the form of positron - electron pairs that arise from their decay" - the scientist says.

WHAT IS YOUR MASS? DEPENDS ON THE ENVIRONMENT...

The second discovery made by the HADES team was that the properties of the rho meson in this "fireball" had slightly different properties than in a vacuum. "In the experiment, we managed to show that the mass of the rho meson - a particle produced in the collisions - was modified, it was different than in other measurements of meson decay in a vacuum" - the scientist says.

He explains that the average mass of the rho meson in a vacuum is well known and can be found in textbooks: it`s approx. 770 MeV. Its mass has a certain distribution (approx. 120 MeV wide) corresponding to its lifetime of about 10-23 s. "We produced the same particle in hot nuclear matter. It turns out that it already has a completely different mass distribution" - he says. He points out that her mass distribution is "blurred" and this state is no longer well defined.

WHY PARTICLES HAVE MASS

Asked why the particles have mass, Prof. Salabura answers: "The mechanism of mass production is not yet known". However, it is known what forces are involved. The physicist from the Jagiellonian University reminds that protons and neutrons forming the nucleus of the atom are made of light quarks. And the mass of these quarks arises from interaction with the Higgs particle discovered in experiments at the Large Hadron Collider (LHC) at CERN.

But the mass of quarks resulting from the Higgs interaction corresponds to the mass of free quark and does not add up to the mass of a proton or neutron! It represents only 2 percent of its mass! All the remaining mass is hidden somewhere "between quarks", and more precisely in the forces that "stick" them together, and which are transmitted by gluons, particles that mediate strong interactions. "It is the strong interactions, and in particular the mutual interactions of gluons, that have the spectacular property of creating effective proton mass" - says Prof. Salabura.

And how does this relate to the HADES experiment? In the "fireball", the nuclear matter is so super-dense that the nature of strong interaction binding the quarks changes. And this, in turn, causes a change in the mass of particles formed there. This has been observed for the short-lived rho meson. 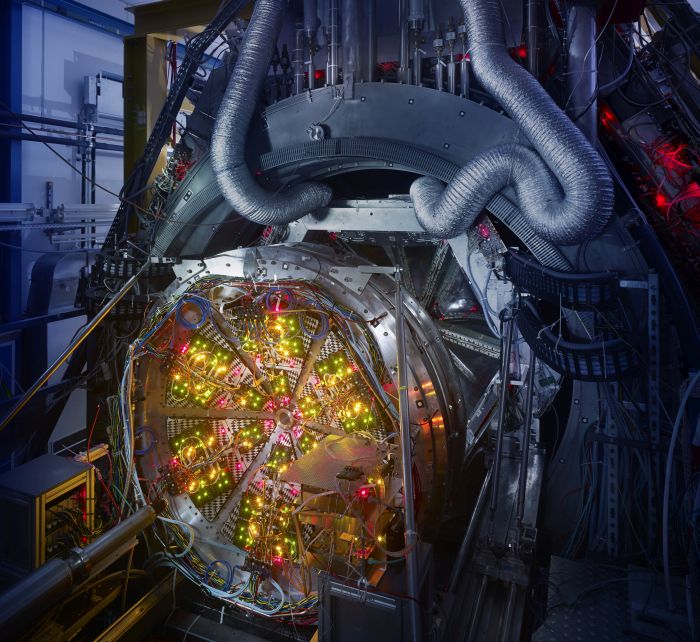 Teams from Poland are involved in the work as part of the HADES experiment: not only from the Jagiellonian University but also from the Institute of Nuclear Physics PAS. Scientists from the Warsaw University of Technology and the University of Warsaw are now joining the team. "In the experiment, we have built and are still building the components of the HADES research device, we supervise their operation and then analyse the data, including those whose results were included in the article in Nature Physics" - the physicist summarizes the participation of Polish scientists in the project.