In the childhood footsteps of the Universe 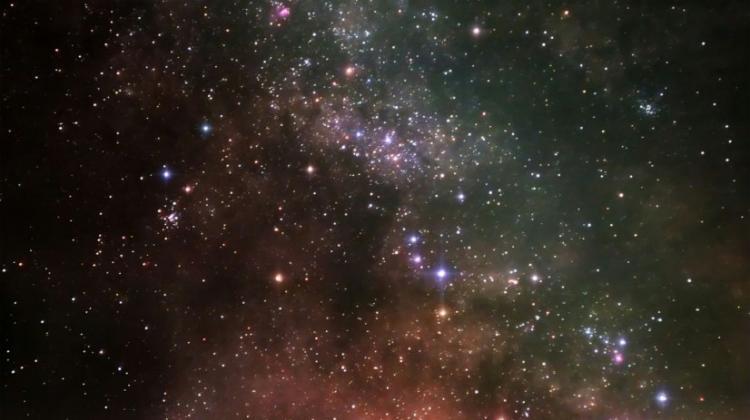 The search for gravitational waves that are a remnant of the process that took place at the beginning of the Universe`s existence, which could resemble... water boiling is the topic of research, in which Polish theoretical physicist Dr. Bogumiła Świeżewska is involved.

Shortly after the Big Bang, at the very beginning, the Universe was nothing like the place we know from our experience. There were no stars, planets or any other clusters of matter: instead, it was filled with hot plasma of elementary particles. Even light could not travel long distances back then, because free electrons could interact with photons, in particular scatter them.

This state changed only about 379 thousand years after the Big Bang. Electrons and protons connected in so-called recombination process, forming hydrogen atoms. This is evidenced by the cosmic microwave background observed in the 1950s: electromagnetic radiation that is a remnant of the early stages of the Universe`s evolution. This moment is also the limit of observation capabilities of traditional radio telescopes.

But for some time now we have had a completely new window on the Universe: the capability to detect gravitational waves. It is possible that thanks to this, in a dozen or so years scientists will be able to detect gravitational waves formed in the first moments of the Universe`s existence. This search will be conducted from ca. 2034 by the LISA detector (Laser Interferometer Space Antenna) placed in space.

"We hope it will be a breakthrough that will allow us to +hear+ what happened behind the curtain of cosmic microwave background" - explains Dr. Bogumiła Świeżewska, a theoretical physicist dealing with - as she calls it - the "childhood of the Universe".

Among the many events that took place during that childhood, the Polish researcher is particularly interested in the process of obtaining mass by elementary particles. "According to our current state of knowledge, most of the elementary particles we observe acquire mass by interacting with the Higgs field" - explains Dr. Świeżewska.

"The Higgs field existing today can be imagined as a thick jelly that slows down the particles moving in it. As a result, they behave as if they were heavy, had a large mass. If for some reason this field would become thin, then these particles would start to move freely, as if they were not limited by any mass" - the researcher says.

According to theoretical predictions, in the very early Universe the Higgs field had completely different properties than today and was not capable of "giving mass" to particles in it. Only after some time, when the Universe began to expand and gradually cool down, did the properties of this field change. At some point (physicists estimate that this took place about 9 picoseconds after the Big Bang), the Higgs field finally thickened, and the particles began to behave as if they had mass.

But the key question is what this process looked like; it may be another proof of the shortcomings of the Standard Model, the basic theory describing elementary particles and the interactions between them.

According to the predictions of the Standard Model, this transformation took place "smoothly": the thin field simply gradually thickened. However, the image emerging from some theories expanding the Standard Model is completely different.

"They predict that the properties of the Higgs field changed abruptly. In some regions of the Universe, particles already had mass, in others not yet" - says Dr. Świeżewska. "We can compare it to boiling water: in a container filled with boiling water at the same time there is water with very different properties: in liquid and gaseous state. As time passes, more bubbles filled with gas appear - until all the water evaporates".

According to the scientists, this is what the Higgs field thickening process in the early Universe could have been like. The main difference between this process and its analogy, however, is that to boil water you need to heat it, add energy. The Higgs field thickening process would have the opposite effect: as bubbles expanded, energy would be released.

Gravitational waves would be the remnant of such rapidly released energy. Dr. Świeżewska explains that they should have different frequencies than the waves observed so far. Therefore, accurate theoretical predictions are needed to best interpret the experimental data.

If the predictions are confirmed and such gravitational waves are observed, this will be a very important clue for physicists. "We would get another proof that the +clean+ Standard Model is incorrect, and a hint in which direction we should look for a fundamental theory" - the researcher emphasises.

She admits that for her it would also be fascinating to observe something that happened at the very beginning of the Universe. "It would be great to get a concrete answer to the question what was happening back then!" - she emphasises.