Archaeologists discovered hundreds of flint tools made by Neanderthals approx. 40,000 years ago during excavations in a cave located within the castle in Olsztyn (Silesia) in the Kraków-Częstochowska Upland.

The castle in Olsztyn near Częstochowa was one of the largest structures of this type in the Kraków-Częstochowa Upland. Currently, picturesque ruins remain with a characteristic, partly preserved stone and brick tower.

The fortress is located on different levels of a large hill. In the area of the lower castle there is a spacious cave, in which archaeologists conducted excavations in July. 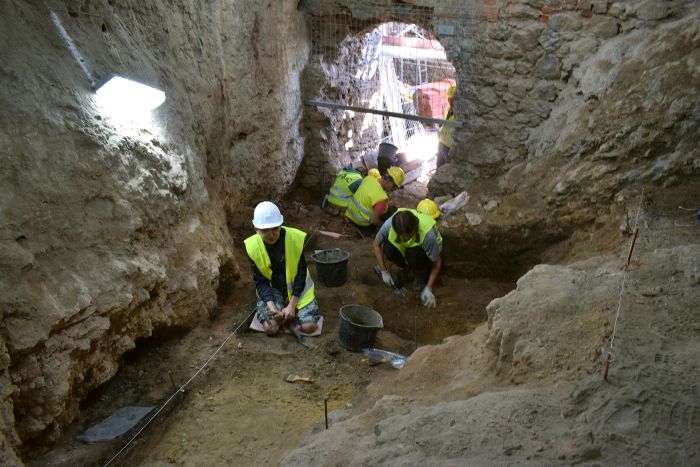 Work in the cavevestibule. Photo by M. Urbanowski

"It turned out that the cave not only served as a castle pantry during the Renaissance. It had been used earlier by the Neanderthals. Evidence of their presence are tools we have discovered: over 200 of them" - says archaeologist Dr. Mikołaj Urbanowski, who led the excavations on behalf of the Foundation Nature and Man.

Urbanowski reminds that the tools come from the time when Neanderthals (Homo sapiens neanderthalensis) lived in Europe alongside modern man (Homo sapiens sapiens). Eventually, the former disappeared from the history of Europe.

The tools found in the cave include knives and scrapers.

Double-sided flint knife made with the Levallois technique. Photo by M. Urbanowski

Initially, scientists did not expect many discoveries in the cave. Their work was related to a project aimed at partial reconstruction of the castle and conservation of the ruins. The researchers` task was to organize the cave after earlier research carried out on a limited scale decades ago.

Meanwhile, in July they found a fragment of a giant pillar, previously not recorded by researchers, which supported the cave vault and the upper castle on top of it.

"It was connected with over a meter thick wall closing the cave; both structures had to be very high: a dozen, and in the case of a pillar even several dozen meters!" - says Dr. Urbanowski.

A fragment of the stone pillar inside the cave. Photo by M. Urbanowski

The wall is bonded with clay mortar, and the stones are arranged in a very similar way as in the round tower of the upper castle. According to researchers, both structures probably belong to the oldest period of the castle, possibly dating back to the 13th century.

This early dating of the castle is also confirmed by the results of research carried out in recent years by Dr. Czesław Hadamik in other parts of the Olsztyn castle.

"The builders of the buttress in the cave were probably concerned about the stability of the castle due to the empty space below it. Therefore, they decided to strengthen the cavern vault and at the same time support the walls of the upper castle" - says Dr. Urbanowski.

Last year, archaeologists found a 15th century metallurgical furnace inside the cave after the wall separating the cave collapsed as a result of a construction disaster. They determined that it was used to produce bronze, as evidenced by the numerous fragments of this alloy - in total, archaeologists found several kilograms of post-production waste.

"The location of the furnace, which generates huge amounts of heat and toxic fumes, in a cave is a phenomenon at least on a Polish scale" - adds Dr. Urbanowski. "Perhaps someone wanted the furnace out of view if the production served not entirely legitimate purposes, for example coin counterfeiting. But at this stage it is only a speculation" - the researcher reserves.

The mystery is even greater that archaeologists discovered the skeleton of a young dog under the furnace. It was probably a foundation offering, a testimony to the superstitions of the contemporary metallurgists, the researcher says. "The purpose of the offering, whose roots can be traced back to pagan times, was to make the smelting process successful. Metallurgists had a lot of knowledge, but intuition and luck were crucial" - the researcher emphasises.

In the 16th and 17th centuries the cave served as a pantry. This information comes from the texts preserved to our times. We know, for example, about barrels stored in the cave, in which salted beef, sauerkraut and milk caps were stored. 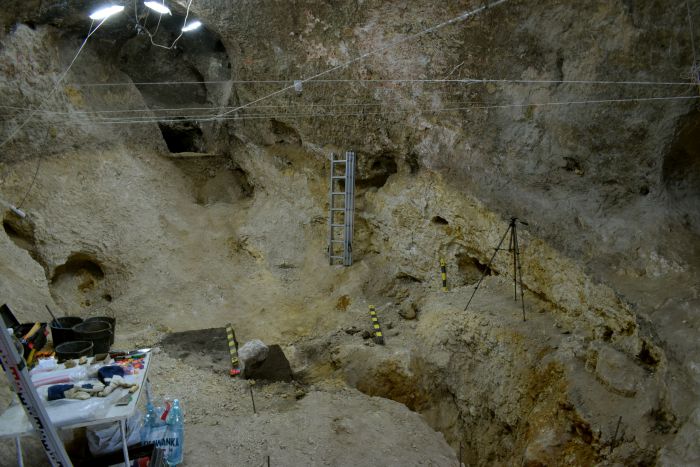 The cave during work, the unexplored part of the furnace is visible. Photo by M. Urbanowski

"We only discovered decayed wood, possibly the remains of those containers" - jokes the archaeologist.

This year`s excavations were financed from EU funds - the European Regional Development Fund.

The castle in Olsztyn had fallen into disrepair even before the Swedish invasion (1655-56). The stronghold hosted all Polish rulers, starting with Władysław I the Elbow-high. Apparently, Władysław II Jagiełło particularly liked to stay there. From 1964, its remains belong to the Land Community in Olsztyn.

The castle in Olsztyn is part of the "Eagle Nests" tourist trail, which includes castles located along the former south-western border of the Kingdom of Poland.