What happens if an asteroid hits Earth? 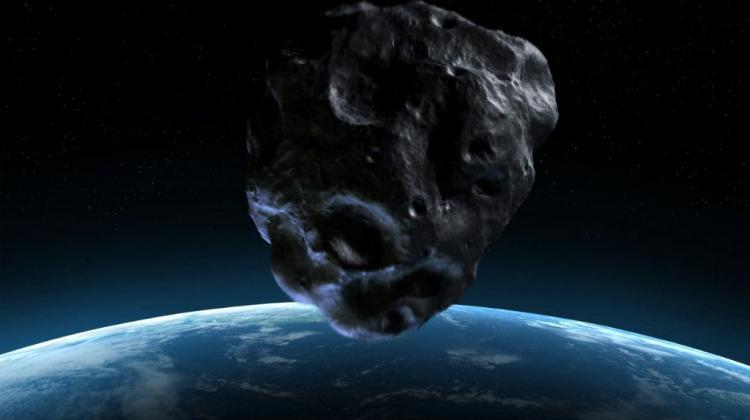 At the end of July, the asteroid 2019 OK zoomed past Earth. If it were to hit Warsaw, all of central Poland would be threatened. Asteroid impact would result in a crater with a diameter of several km, up to 400 m deep, says crater researcher Dr. Anna Łosiak.

At the end of July this year (25.07), asteroid 2019 OK flew past Earth. It was very close: only one fifth of the distance between Earth and the Moon. The diameter of this object is between 60 and 130 m (more precise calculations are not yet available). In one second it covered 24 kilometres - the speed achieved only by the fastest spaceships.

"If this asteroid hit the Earth, a crater with a diameter of 2-4 km and a depth of 400 m would be created" - says asteroid researcher Dr. Anna Łosiak from the Institute of Geological Sciences of the Polish Academy of Sciences and the University of Exeter. She adds that it would be even larger than the famous Meteor Crater in Arizona in the US. The aforementioned crater, formed about 50 thousand years ago, is 1.3 km in diameter and 170 m deep. It was formed by an impact of an asteroid that was about 50 m in diameter.

As part of her work, Dr. Łosiak investigates asteroid impact craters and works on the possible effects of future space object impacts. "I want to understand how dangerous these phenomena are. So if we know, for example, that in three days an asteroid with a diameter of 50 m will hit a specific place on Earth, then we should also know whether to evacuate people from the area of 5 km, 100 km or 10 thousand km. It is important so that we can avoid a tragedy" - she emphasizes.

She adds that if it were known that an asteroid like 2019 OK would hit Warsaw, it would be necessary to evacuate the whole population of Mazovia. The threat would be not only the falling mass the size of a pitch, but also rocks thrown from the impact site. "They would be scattered around the area at a speed faster than gun bullets" - the researcher says. She adds that asteroid impact would also contribute to the formation of a shockwave with a radius of several hundred kilometres. "For most witnesses it would be visible as a very strong wind breaking trees and windows" - she says.

Dr. Łosiak works on experiments simulating meteor impacts. Using a two-story cannon, scientists accelerate balls of different material, 3-5 mm in diameter, to a speed of 5-10 km per second. The experiment is carried out in a vacuum so that such projectiles do not lose speed. Observing the course and effects of such an impact allows to develop models of asteroid impacts with different parameters.

Asked whether scientists have already predicted the effects of an asteroid impact, Dr. Łosiak confirms. "In 2008 it was known that the asteroid would hit Sudan. Scientists had predicted in advance that it would hit a desert and no evacuation would be needed. They predicted that the size of the object that would hit Earth would be small" - she says. She adds that these predictions were confirmed.

As part of her work, Dr. Łosiak studies rocks from small impact craters formed by asteroid impacts in various parts of the world. Such rocks are the only witnesses of ancient disasters. "Poland has documented craters only after one asteroid impact: Morasko. They formed approx. 5,000 years ago" - the researcher says. The asteroid was 3-4 m in diameter, weighed about 900 tons and entered the atmosphere, where it broke into several pieces. "The largest crater, 100 meters in diameter, is located in Poznań, where you can see it with your own eyes" - she informs.

It is believed that it was an asteroid that contributed to the mass extinction of dinosaurs. According to Dr. Łosiak, that object was 10 km in diameter, and the crater remaining in Mexico measures 180 km. "It was a very unfortunate event for dinosaurs. A lot of carbon dioxide and sulphur dioxide was released from the rocks, which the asteroid hit, which caused huge climate changes on the planet. Nuclear winter came" - the researcher says.

If such a catastrophe were to happen again, she adds, it could be the end of civilization as we know it.

The researcher points out that Earth is constantly being attacked by space objects, but almost none of them can cross the atmosphere barrier. In the atmosphere, also as a result of friction, most space objects heat up to huge temperatures, burn and break into such small fragments that they do not reach Earth.

"So far, only about 196 asteroid impact craters have been documented on our planet. The oldest of them is 2 billion years old" - the researcher says.

Why does the Earth not have as many craters as the Moon? Dr. Łosiak says that this is because of our atmosphere, but also to the active geology of our planet. Earth`s tectonic plates are constantly active, and impact craters can be crushed, melted and pressed under the Earth`s surface. Erosion is also important, as it blurs the traces of former craters. No less important is the fact that most of our planet`s surface is covered with water. And at the bottom of water bodies, craters either do not form (because the asteroids are decelerated by water) or they cannot be found.

Dr. Łosiak notes out that space rock crumbs hit Mars more often than Earth. The atmosphere of the Red Planet is not as dense as Earth`s, and the planet is closer to the asteroid belt than we are. "Falling stars" are more likely to hit the ground there. Future Mars colonizers will have to take that into account.