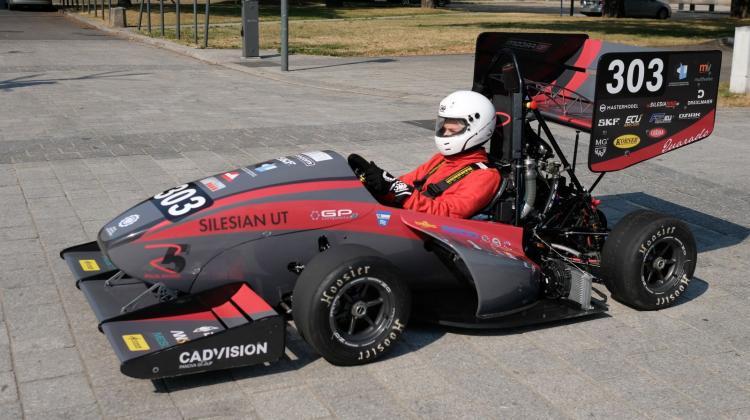 SW-02 Quarado, an electric-powered race car designed by students of the Silesian University of Technology in Gliwice, won the Formula Student Andorra in Spain.

As reported during a press conference in Gliwice, the crew of SW-02 Quarado took first place overall in this competitions. It is the first such success of the team from the Silesian University of Technology.

Formula Student is an international series of academic team competitions. Students from the best universities and polytechnics around the world design and build race cars to, after the testing phase, race them on the largest and most famous race tracks in the world. The Formula Student Andorra is held on the Parcmotor Castellolí track near Barcelona, Spain. The length of the race track is 4113 m.

According to the supervisor of the Student Science Club PolSl Racing Dr. Mirosław Szczepanik, his team`s well-deserved victory is the result of continuous development and hard work of the entire team. "The well-thought-out, innovative solutions of young engineers of the Silesian University of Technology used in Quarado have brought the expected results. I hope that our achievements will attract sponsors, enabling further progress and construction of even better vehicles, especially that our plans for the near future are mainly focused on electromobility" - he said.

Quarado`s predecessor was the SW-01. Compared to the predecessor, the designers significantly improved performance in Quarado: engine power increased from 75 to 95 hp, mass was reduced by 60 kg, which translated into better acceleration - 100 km/h in 3.5 seconds. SW-01 accelerated a second slower. The Quarado weighs 220 kg, it is powered by lithium-ion batteries.

"The experience gained during previous competitions and meticulous control allowed us to present the best side of SW-02 Quarado. At the Castellolí competition we were able to win first place overall, and win in the Best Smart Solution and Best Body & Brake Design categories. Formula Student competition is the best testing ground for students" - said the PolSl Racing team leader Maciej Marzec.