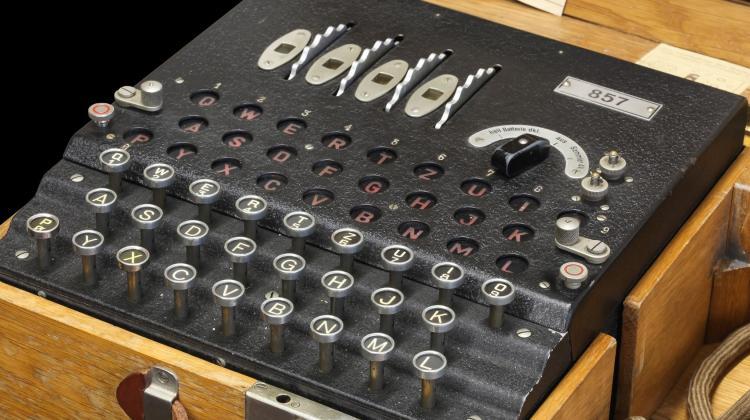 80 years ago, on July 25, 1939, the Polish intelligence disclosed Polish achievements in breaking the German Enigma ciphers to the French and British allies. Work on breaking subsequent versions of "Enigma" continued in the British centre at Bletchley Park. According to historians, breaking the code shortened World War II by 2-3 years.

"Breaking the Enigma code undoubtedly saved thousands of lives and shortened the war. And the Polish contribution was crucial" - former British Ambassador Robin Barnett said during the ceremony on the 75th anniversary of handing over the cipher-breaking methods. He stressed that the British specialists tried to do it, and the French services tried to steal the code books, "but it was Poland that realised that only mathematicians could break the code". "It was a Polish team of mathematicians led by Marian Rajewski, who ultimately succeeded" - said the British ambassador.

At the end of December 1932, Marian Rejewski deciphered the first information sent with the German encryption machine Enigma. Co-authors of the Enigma code breaking were Jerzy Różycki and Henryk Zygalski.

Mathematicians Rejewski, Różycki and Zygalski, students of the Poznań University, attended a course for cryptologists organized at that university with the participation of the army. After completing the course, in 1930 they joined the Polish General Staff`s Cipher Bureau. They were working on breaking the code of the German electromechanical encryption machine Enigma. It was constructed in the 1920s to secure commercial communications. It was quickly employed by the German military.

According to Marek Grajek, author of the book "Enigma. Bliżej prawdy" ("Enigma. Closer to the truth"), breaking the Enigma cipher was considered impossible. The Polish cryptologists succeeded thanks to using mathematical methods instead of linguistic ones. This idea came from Lt. Col. Maksymilian Ciężki from the Cipher Bureau.

The three mathematicians designed a copy of the encryption machine. Copies of this device were built at the AVA Radio Company in Warsaw. Several connected machines formed a cryptological bomb designed to automatically break the German cipher.

In the summer of 1939, in the radio intelligence centre in Pyry near Warsaw, the Polish military authorities gave reconstructed Enigma machines along with information on the broken code to representatives of France and Great Britain.

In September 1939, Marian Rejewski, Jerzy Różycki and Henryk Zygalski evacuated through Romania to France. Jerzy Różycki died in January 1942 on a ship that sank in mysterious circumstances in the Mediterranean. The other two mathematicians continued to work on breaking German ciphers in the Polish Army unit in Great Britain.

Work on breaking subsequent versions and improvements of the Enigma cipher continued in the British cryptological centre at Bletchley Park. According to historians, thanks to the fact that the Allies knew the information with the Enigma, the Second World War lasted than 2-3 years shorter.

In 2000, Marian Rejewski, Jerzy Różycki and Henryk Zygalski were posthumously awarded the Grand Cross of the Order of Polonia Restituta. (PAP)