Experts: It is difficult to determine the exact dates of further exploration of space 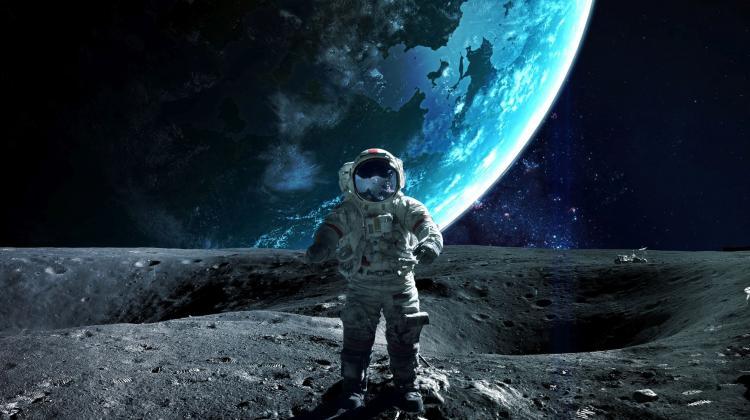 People will certainly return to the Moon, but it is difficult to predict when the plans for further exploration of space will be realized. The key will be to reduce the cost of transporting materials into space, say the former head of the Polish Space Agency Grzegorz Brona and journalist Ewelina Zambrzycka.

According to announcements of both space agencies and private investors, man will return to the Moon, probably in the coming decade: NASA has recently announced that it would send astronauts to the south pole of the Moon in 2024; it wants to build a permanent base there by 2028.

What`s next? The plans are ambitious: there is talk about new space stations, manned flights to Mars, even about the possible colonization of that planet. The history and the future of space exploration are the subject of the book "Człowiek - istota kosmiczna" ("Man - a cosmic being") - a record of the conversation between science journalist Ewelina Zambrzycka and physicist, former head of the Polish Space Agency Grzegorz Brona.

HOW MUCH FOR A TRIP TO ORBIT?

Zambrzycka emphasizes in an interview with PAP that it is difficult to tell whether man will live on other worlds in our lifetime. "I want to point out that in 1969, after the first people landed on the Moon, the media announced that soon we would fly to Mars and start a colony there. 50 years have passed and it has not happened. So many different problems appeared in the meantime that it turned out to be virtually impossible. So it is difficult to set specific dates" -she says.

"The key factor is the price of this pleasure" - adds Grzegorz Brona. The cost of bringing only one kilo of cargo into space is still tens of thousands of dollars. The price is not much better for large shipments: about 5,000 dollars per kilogram. And it is not enough to fly a person into space, you have to pack everything they will need for survival: air, food, water, equipment. Until we can bring all that into space, we will not be able to colonize other planets" - he says.

The former head of the Polish Space Agency adds that after reducing transportation costs, the next step will be to produce all the necessary substances, objects and tools away from Earth. Work on this is already underway: for example, a European mission to the Moon is planned to investigate the possibilities of producing water and oxygen from lunar rocks.

This does not mean that after overcoming these barriers, ordinary people will immediately settle down on other planets. "The first step to colonizing is sending pioneers" - says Brona. "They will be very well trained specialists in the field of engineering, probably accompanied by soldiers able to cooperate with each other in small groups. But this is a long flight into space that requires separation from Earth for several dozen or a few hundred days, without an opportunity to return any faster. This will have to be a very tight team, without any conflicts" - he says.

"Only later crowds of people will follow who will have to maintain the colony. It is one thing to create the seed of a colony, another to create a self-sufficient colony, where residents can simply live a good life" - adds Brona.

The interviewees believe that a new space age has already begun that may lead to the colonization of other worlds. "A new space race is already under way between superpowers - China, the US and other countries. We also have something that was not there before, competition between private companies in the space sector" - says Brona. He adds that the new space age can be observed, for example, in using satellite data systems - GPS or telecommunications.

Internet satellites are also starting to be launched into orbit. At the end of May, Elon Musk`s SpaceX put 60 of the planned 12,000 small satellites in orbit, through which high-speed internet access services will be provided. "Recently (Amazon CEO) Jeff Bezos announced that - following in Musk`s footsteps - he would launch his own constellation of Internet providing satellites, so there is a chance that two giant constellations of microsatellites will appear in the sky!" - says Ewelina Zambrzycka.

But there is a big problem with these numbers. "Recently, astronomers panicked, they said that if more companies sent as many satellites as they plan, we would have a problem with watching the stars from Earth" - says Zambrzycka. She adds that there are plans to send additional 30,000 new objects into the orbit. This is a giant jump: right now, there are around 2.5 thousand operating satellites in orbit, and as many inactive ones.

"Everything is fine if such a system of many satellites is under control. Worse, if it escapes control, such satellites will pose a threat to each other" - notes Grzegorz Brona. A collision of satellites can cause a chain reaction: it can create a lot of additional, dangerous space debris that will collide with more satellites. "This scenario can generate so much space debris that in the future we will actually not be able to leave Earth, because any space mission will be at risk" - he emphasizes.

But in reality it is not that bad. "Fortunately, all companies that want to make large space investments think about these issues" - adds Brona. Among the ideas on how to prevent collisions of satellites orbiting the Earth, the most popular is the proposal to equip them with thrusters, which would allow them to perform evasive manoeuvres.

HOW DOES POLAND FIT INTO THIS?

After joining the European Union, Polish scientists and businesses gained the opportunity to participate in programs of the European Space Agency (ESA). Currently in Poland there are dozens of companies and research institutes that carry out a number of programs, also for ESA - in the last 5 years, they have carried out approx. 300 projects for the European agency.

"We have our own rocket programs" - emphasizes Grzegorz Brona. He adds that in the 1970s, Poland was one of the first countries to build rockets with a ceiling greater than 100 km, that is, above the conventional boundary between the Earth`s atmosphere and space. "Now, in a sense, we are reviving this program. We currently have two centres - one in Gdańsk, the other in Warsaw - that build small suborbital rockets" - he says.

"We are also beginning to have ambitions related to small satellites that provide certain data slices for the needs of the economy. We have satellite data processing systems in Poland, we are an important partner for ESA" - adds the former head of the Polish Space Agency. "It seems that we are beginning to boldly go where no Pole has gone before, that is, further and further into space" - he concludes.