Why did the bison move to the forests? Man shares the blame! 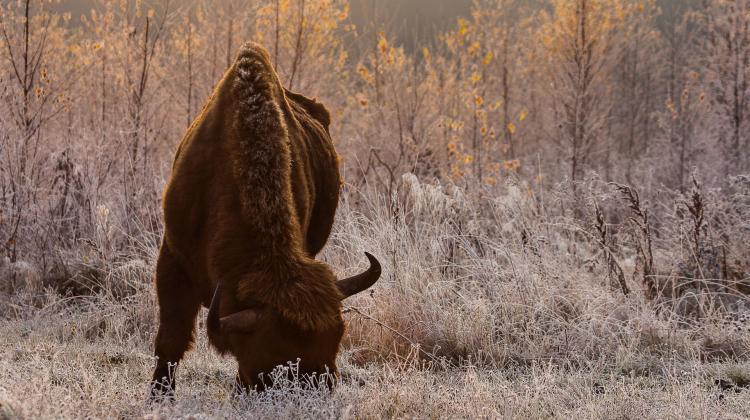 After the retreat of the glacier in Europe, the European bison`s diet changed. These animals moved to the forests from the more convenient open areas. The reason was not only a change in vegetation, but also human pressure. The aurochs did not adapt so well to these changes, researchers from Białowieża show.

In Europe, only three species of large herbivores survived the Holocene associated with climate warming and the retreat of the glacier: bison, aurochs and elk. How did these species cope in the last 12,000 years of dynamic environmental changes related to the expansion of the forest after the glacier`s retreat? And how did the human pressure affect populations of these animals?

This issue was examined by a team of scientists from the Mammal Research Institute of the Polish Academy of Sciences in Białowieża, led by Dr. Rafal Kowalczyk. The results of the research, conducted in cooperation with foreign scholars, have been published in the prestigious scientific journal Global Change Biology. The representatives of the institute informed about the results in a release sent to PAP.

The researchers point out that bison and aurochs were adapted to more open environments, and forests were a more difficult environment to survive for these species. "Still, forests played an important role in avoiding human pressure and became a shelter that enabled survival" - the researchers write.

In their assessment, the flexibility of feeding behaviour probably was the key to survival in the changing environmental conditions during the Holocene. The species that were able to adapt, such as bison and elk, survived. Those less flexible, like aurochs, became extinct.

Researchers collected bone samples from nearly 300 animals (bison, aurochs and elk) from museum collections across Europe. They analysed them for the content of stable carbon and nitrogen isotopes. Animals ingest these isotopes with food, and these materials are deposited in the bones. Plants growing in forests have a different content of carbon isotopes than those growing in open areas. And the content of nitrogen isotopes depends on the plant species, the soil and the altitude above the sea level. Therefore, by studying the isotope composition, it is possible to reconstruct the environments of mammals and their diet.

The research shows that these animals made the transition from using more open environments (in the early Holocene and before the Neolithic) to using forests (in the Neolithic period - about 6-7 thousand years ago - and the late Holocene).

"The expansion of forests in the first millennia after the glacier had retreated forced large herbivorous species to feed in forests. The human pressure, growing from Neolithic to modern times, did not allow them to use open areas more intensively despite the shrinking forest cover" - comment the scientists from the Mammal Research Institute PAS.

European bison was whe species with the largest variations in the isotope content. This suggests the high plasticity of this large herbivore, which could have a bearing on its survival.

The least plastic species, especially when it comes to diet, was aurochs. The higher specialization of this animal could have resulted in much weaker adaptability to the changing environment and a new plant collection in the forests, leading to the gradual disappearance of this mammal, widespread and numerous in the beginning of the Holocene, until its extinction in the 17th century.

The explanatory factors for the observed changes in bone isotope content included time (bone age), longitude, altitude and forestation, but their set varied depending on the species. The most mysterious case was elk, because none of the analysed factors could explain the isotope changes in this species. This may result from the seasonally variable and very diverse diet of elk, seasonal migrations observed today only in some individuals of this species and the fact that the marsh areas preferred by this species were subject to less human interference in the past.

The results of research conducted by the researchers from Białowieża show the strong impact of natural changes (forest expansion) and anthropogenic changes (deforestation and human pressure) on the feeding ecology of large herbivores.