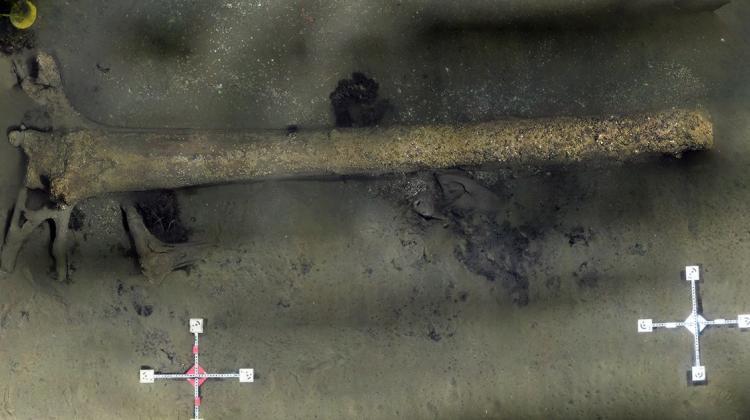 Polish and Lithuanian scientists studied 10,000 years old remains of a sunken forest in the area of Juodkrante near Klaipėda (Lithuania). When the trees, today sunken, formed a dense forest, the Ice Age was ending, and the Baltic Sea was forming as a result of the retreating ice sheet.

The National Maritime Museum in Gdańsk, which conducts research together with experts from the Klaipėda University, provided PAP with the summary of the June work season.

"The purpose of the joint expedition of Polish and Lithuanian researchers was to prepare the photogrammetric documentation of finds. The employees from the Underwater Research Department of the National Maritime Museum have taken thousands of underwater photographs that will be used to create three-dimensional models of sunken trees" - the museum informs.

The research was conducted from the Klaipėda University schooner "Brabander". During the underwater work, photogrammetry (about 3000 photos) of two several meters long trunks was prepared. Polish archaeologists also tested a new calibration set that allows for more precise scaling and locating of objects in the photographs.

The area of the Baltic Sea bottom near Juodkrante with the remains of submerged Stone Age forests (about 10,000-9 thousand years ago) was discovered by scientists from the Klaipėda University during seabed scanning and underwater research. Archaeologist Prof. Vladas Žulkus turned to the National Maritime Museum in Gdańsk experts for help. This started the international cooperation, in which the Polish museum is represented by three specialists: Dr. Krzysztof Kurzyk, Janusz Różycki and Paweł Litwinienko.

According to the experts, the sea area, in which the sunken forest is located, can bring new information about man at the end of the Ice Age, because the area was inhabited at the time. Therefore, researchers hope to discover traces of human presence. The melting ice raised the level of the young sea, which flooded the former land and forests.