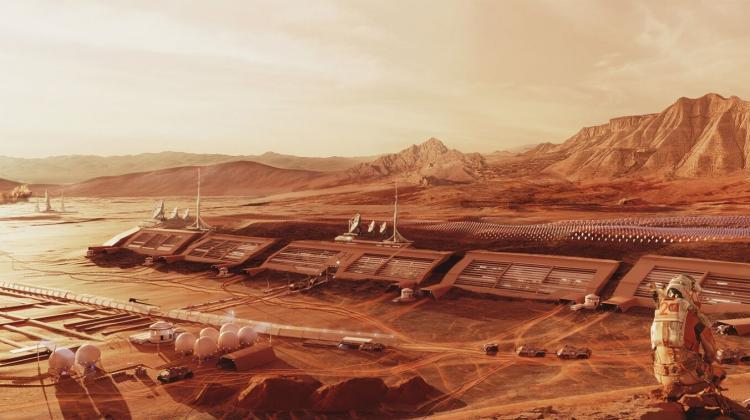 Two teams of students from the Wrocław University of Science and Technology, which prepared designs of Martian settlements, have advanced to the world finals of Mars Colony Prize. The students will present their ideas for a self-sustaining Mars colony in California in October.

The organizer of the contest - the Mars Society - challenged the participants to design a self-sustaining, 1000 person Mars Colony. The settlement should import as few goods as possible from Earth and be capable of sustaining itself. It has to produce food for its residents, building materials needed for gradual expansion, as well as energy, clothes, vehicles, machines and all products of everyday use - just like a typical Earth city.

According to the Wrocław University of Science and Technology, the designers had to take many constraints resulting from the conditions on the Red Planet into account, such as lower fertility of Mars soil compared to the soil on Earth and temperature fluctuations from minus 140 °C to even plus 30 °C.

The competition judges assessed technical designs and descriptions of systems that would be used in the colony, and their operation. Other important factors included the economic issues and self-sufficiency of the base, as well as the aesthetics of the colony and the approach to solving social, cultural, political and organizational problems.

During the finals, each team will have 20 minutes to present their work and 5 minutes to answer questions from the judges.

The first design in the finals - "Ideacity" - was created by the Innspace group. The colony from their project would be built on a hexagon plan with a side of 400 m. Closer to the centre, students designed buildings for everyday use, while industrial buildings would be located in the outer part of the colony. Most of the buildings are located underground, which protects residents from radiation.

"We put a lot of emphasis on social integration, thanks to which the inhabitants of the colony will be able to get to know each other well and become a community, which will significantly affect their quality of life. The largest part of the area will be occupied by crops, which are the source of food for the whole colony. Another large part is the industrial zone, which consists of warehouses, production facilities, factories and treatment plants. Another important place will be the research centre combined with medical facilities. We have included a hotel, a chapel, educational facilities, sports centre and gardens" - says Justyna Pelc, quoted in the release on the Wrocław University of Science and Technology website.

Students propose that most buildings should be built by robotic 3D printers, and Martian soil, regolith, a raw material found in abundance on the Red Planet, should be used as a building material.

Designers of "Ideacity" point out that monitoring life processes and psychological aspects of settlers` life is the key aspect of life on Mars.

The second project that advanced to the finals is "Twardowsky". It has been developed by a team of 19 people - students and doctoral students from the research initiative Space is More and the Scorpio Project, with the help from several members of the Science Club MOS and the LabDigiFab initiative.

According to the Wrocław University of Science and Technology representatives, "Twardowsky" would be divided into five units connected by a hub - the main square, where the places related to spending free time and entertainment would be located. The space would have a terrace layout. Apartments of colonizers would be located next to restaurants, cafes, shops and medical facilities.

Residents would be divided into groups of two hundred people. "This would give them a better chance to get to know each other, not be anonymous in the crowd" - explains the design team member Orest Savytskyi.

"In our colony, we have designed many open, green areas and waterfalls, which create places that soothe and improve the mood" - says another team member, Natalia Ćwilichowska. She explains that every unit would contain plants, from which food would be produced. The production of food in "Twardowski" would be based on aquaponics, a combination of fish farming in large aquariums with plant cultivation in water.

The colony would recycle products on a large scale. For example, cellulose fibres would be used to produce clothes, and other plant waste - to make Mars vodka, which, as the team from the Wrocław University of Science and Technology proposes, the Mars colonists could export to Earth.