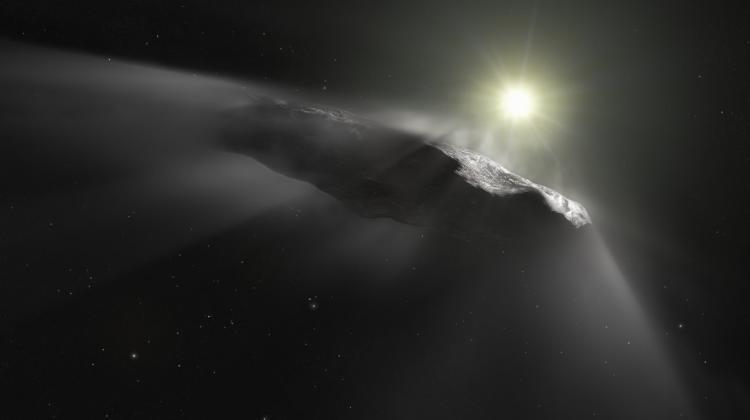 Artist's vision of the object 'Oumuamua that flew to the Solar System from the interstellar space. Credit: ESA / Hubble, NASA, ESO, M. Kornmesser

The European Space Agency (ESA) has recently decided to build the Comet Interceptor probe that will "ambush" an undiscovered comet from the outskirts of the Solar System or another planetary system. For the first time in the history of ESA, the head of one of the mission experiments will be a scientist from Poland.

The Comet Interceptor mission is designed to examine a comet that has survived from its birth until today in an intact form. The physical characteristics of such a "fresh" object will reflect the conditions that prevailed during the formation of the Solar System 4-5 billion years ago, the Space Research Centre PAS explains in a release.

The Comet Interceptor will consist of three probes. Connected with each other, in 2028 they will be put in a temporary orbit 1.5 million km from the Earth. According to Space Research Centre PAS release, shortly before reaching the target, the probes will be separated and the observations of a comet from three different locations will begin. This way, they will provide a unique three-dimensional image of the comet`s nucleus and tail.

The three probes will be equipped with a total of nine research instruments. One of them - Dust, Field and Plasma (DFP) - will be installed on two probes. The role of chief researcher of the DFP experiment was entrusted to Prof. Hanna Rothkaehl from the Space Research Centre PAS. Never before has a scientist from Poland held such an important position in a mission carried out by the European Space Agency, the Space Research Centre PAS emphasises in its release.

"The DFP instrument will measure the electric and magnetic field around the comet, determine the characteristics of dust, gas and plasma surrounding the comet`s nucleus, and monitor how the comet plasma reacts to the solar wind" - explains Prof. Rothkaehl, quoted in the release.

The measurements will be carried out simultaneously by two probes. Prof. Rothkaehl explains that one of the probes will also act as a communication station for communications with Earth for the entire mission. During the passage of the comet, it will remain at a safe distance from its nucleus, while the second probe will approach the comet and conduct measurements, immersed in the gas envelope of the comet.

Previous comet missions focused exclusively on periodic comets that pass many times close to the Sun. Since each such passage changes the physical properties of the comet`s nucleus, scientists find it difficult to accurately recreate the original properties of comets.

The researchers from the Polish Academy of Sciences emphasise that studying a "fresh" comet is a challenge, as objects of this type are located on the outskirts of the Solar System. Some even come to the Solar System from other planetary systems or interstellar space. Several months to several years pass from their discovery to their passage near the Sun.

"This is not enough time to prepare an appropriate space mission. To solve this problem, the authors of the Comet Interceptor project proposed an innovative research strategy - they will launch and +park+ a probe in space, and then find an object, towards which the probe could embark at any moment" - we read in the Space Research Centre PAS release.

Comet Interceptor will be launched in 2028 on the Ariane 6 rocket, along with the European observatory ARIEL, which will be used to study the atmospheres of exoplanets. Scientists from the Space Research Centre PAS are also significantly involved in that mission.

Researchers and engineers from CBK PAN have been involved in the study of comets and space plasma for years. They participated in pioneer missions to Halley`s comet (VEGA-1 and VEGA-2 probes in 1984) and the most advanced comet mission in history (Rosetta) that ended with landing on the comet`s nucleus in 2014. (PAP)