Archaeologists on the trail of counterfeiters from outside the Roman Empire 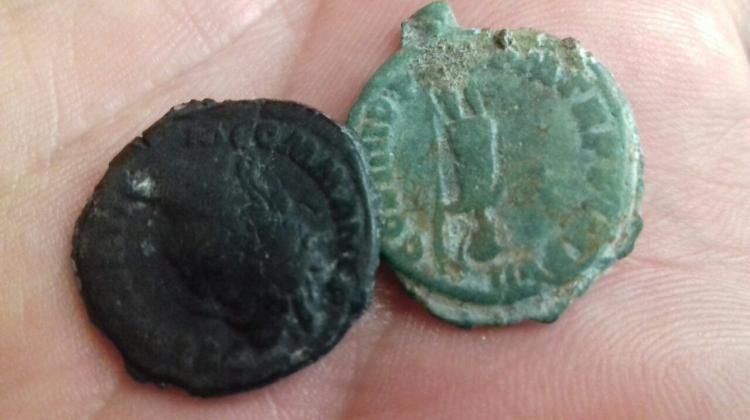 Roman coins from the first centuries of our era were counterfeited in the Roman Empire and beyond, possibly also in the territories of today`s Poland. The analysis of denarii, which will allow to determine the scale of this activity in Central and Eastern Europe, will be carried out by archaeologists from the University of Warsaw.

In the first centuries of our era, the territories of today`s Poland, Ukraine and Belarus were beyond the borders of the Roman Empire. They were inhabited by Germanic tribes, including Goths and Vandals. In these areas, hundreds of thousands of silver Roman denarii struck in the Roman Empire have been found. Or so it seemed.

"It turned out that some of them were counterfeits, the coins were silver plated or made of an alloy that resembled silver" - says Dr. Arkadiusz Dymowski, who carries out the project at the University of Warsaw.

Now, researchers want to determine the scale of forgery. Dr. Dymowski together with another archaeologist from the University of Warsaw, Dr. Kyrylo Myzgin, will (use physicochemical methods) to determine the composition of several thousand denarii found in Poland, Ukraine and Belarus.

The problem of counterfeiting intrigues researchers for several reasons. Until recently, they were convinced that counterfeit coins that reached the barbarian tribes had originated from the lands of the Roman Empire. "However, in recent years in Ukraine, several workshops have been discovered, in which counterfeit denarii were being made. We expect that finding similar workshops in Poland is only a matter of time" - suggests Dr. Myzgin.

For now, it has been difficult to estimate the scale of forgery - not least because the coins found, for example, during excavations, are heavily corroded. At first glance, it is difficult to say that something is wrong with them. It was usually assumed that they were the real thing.

Counterfeits are divided into two groups. The first (fourrées) are silver-plated denarii, the core of which is made of bronze, copper or other non-noble metal, less expensive than silver. Researchers estimate that in Poland alone, fourrées can account for up to a quarter of the denarii discovered so far.

The counterfeit coins of the second type strongly resemble silver originals. But they are made of silver-like alloys - most often copper alloys with a high content of tin or lead.

To the east of the Roman Empire, in the areas from present-day East Germany, through Poland to Ukraine and western Russia, only denarii were used on a large scale in the first centuries of our era. They were tiny (similar in size to today`s 2 euro cent coin), but valuable. "One denarius was more than the daily pay of a Roman legionary in the 1st century AD" - says Dr. Dymowski.

Smaller denominations circulated on a larger scale only within the Empire. These coins were made of copper alloys.

Could a person, who received the coin, tell a real Roman denarius from a counterfeit? According to Dr. Dymowski, this can not be determined with certainty. Even original coins were struck using hand-made stamps. "Each was an individual work of art made by an engraver" - the scientist explained. Therefore, the coins were slightly different in appearance and weight, even by 1-1.5 grams. These differences are too small to be easily noticed by an ordinary user.

Researchers emphasize in an interview with PAP that discoveries made in Poland in recent years have changed their views on the frequency of using coins in everyday life.

"We believe that in the first centuries of our era east of the Empire, the exchange of goods using money - denarii - was more common than it previously thought" - says Dr. Myzgin. Where does this assumption of experts come from? Single coins, most likely lost ones, are sometimes found in ancient settlements. Previously, archaeologists knew mainly large collections of denarii, discovered in the form of treasures of several thousand coins.

"The prevailing view was that coins were used by single, important persons at specific moments" - reminds Dr. Myzgin. - "We believe that the reality was different and coins were more common".

Coin authentication tests will be conducted as part of a National Science Centre grant.