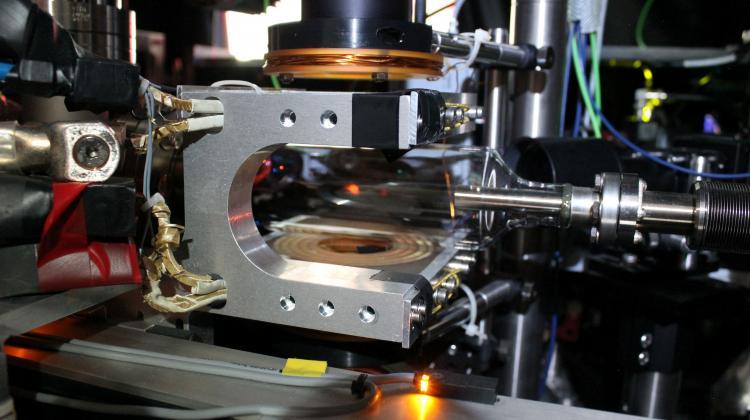 Extremely cooled atoms in the Bose-Einstein condensate behave like a cheerleading team. Now, for the first time in history, it has been possible to observe what happens when other atoms - like lost rugby players - bump into such a harmonious team. This is a historic achievement.

The results of the work of scientists from the Center for Theoretical Physics of the Polish Academy of Sciences in Warsaw, Denmark and Germany is a world-class achievement that has a chance to find its way to academic textbooks. Detailed knowledge of the properties of such quantum fluctuations is extremely important for bringing the quality of super-precision measurements - including time measurements - to a whole new level. The research could allow to accelerate the development of technologies such as quantum computers or extremely accurate gravitational wave detectors.

Bose-Einstein condensate is a state of matter that occurs in extremely low temperatures, very close to absolute zero (-273.15 degrees C). Atoms in the condensate - a cloud of gas held up by magnets - cease to be a crowd of individualists randomly bumping into each other and moving in all directions, and begin to form a harmonious group, whose members behave like a cheerleading team doing a choreographed routine. This is because the particles together form a large wave of matter. The Bose-Einstein condensate behaves like a "superatom".

There are ideas for using this unusual state of matter in practice. Bose-Einstein condensate may be useful in extremely accurate devices that measure time, rotation - for example of Earth - or gravity. "Satellites are equipped with quantum clocks that measure time with great accuracy, but the next generation of these clocks will no longer use of independent atoms in measurements, they will use Bose-Einstein condensate" - says the lead author of the study, Prof. Jan Arlt from the Danish University of Aarhus. Co-author, Dr. Krzysztof Pawłowski from the Center for Theoretical Physics PAS adds that "it is very difficult to manipulate a single atom". "And when you use the whole cloud with the same properties - the signal can be measured with more accuracy than the signal from a single atom" - he explains.

But it has been known for years that the ideal situation cannot be achieved in an experiment: a set of atoms in the Bose-Einstein condensate is unable to perform its routing in peace. Something always disturbs it: chaotic atoms from the outside get in the way, like rugby players they bump into the crowd of "dancing" particles. But it was not known how many such unruly atoms crash the rehearsal and how their appearance affects the work of the team.

"If we cooled the sample to absolute zero, the fluctuations would disappear, but we can not do that in practice, so fluctuations are inevitable" - emphasises Prof. Kazimierz Rzążewski from the Center for Theoretical Physics PAS.

The possibility of estimating the scale of fluctuations is important as it affects the quality of measurement, which is carried out with Bose-Einstein condensate.

"In Prof. Jan Arlt`s experiment, it was possible to control the number of atoms with such precision that for the first time in history quantum fluctuations became visible" - explains Prof. Rzążewski. And Prof. Arlt adds: "Thanks to theoretical research developed here in Poland, we knew what we were looking for. Previously, the accurate parameters of performing the measurement were not known".

The results of the research were published in the prestigious journal Physical Review Letters (https://journals.aps.org/prl/abstract/10.1103/PhysRevLett.122.163601). "One of the reviewers wrote to us that our research would end up in the next generation of textbooks, and students will learn about our research" - smiles Prof. Rzążewski.

The research of the Polish team was financed with a National Science Centre grant. (PAP)