Space
This text can be copied
Ewelina Krajczyńska

JUICE: A European mission with Polish participation to explore the moons of Jupiter 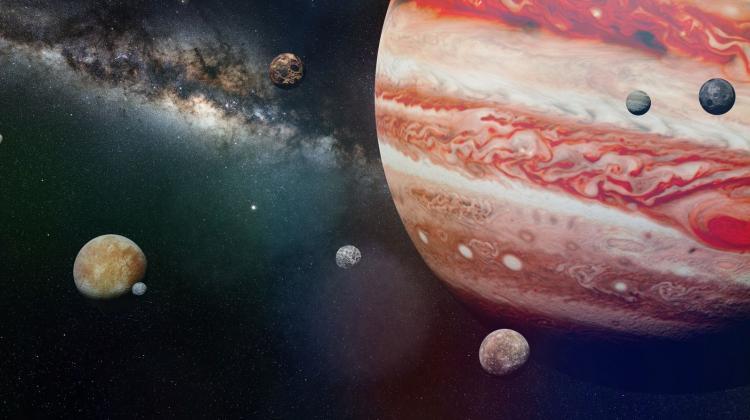 Exploring Jupiter and its moons is the goal of the JUICE mission of the European Space Agency. Polish scientists, engineers and companies are involved in the work related to the mission. The more than seven years long journey towards the most massive planet in the solar system will begin in 2022.

The JUICE (JUpiter ICy Moons Explorer) mission is one of the current projects of the European Space Agency (ESA). Its total cost is nearly 900 million euros. The project is part of ESA`s strategic science program called Cosmic Vision. It is expected to give answers to the most important questions regarding our Universe: what conditions enable the formation of planets and the emergence of life, how does the Solar System function, how did the Universe form and what it is made of. The research goals of the JUICE mission are closely linked to answering these questions.

The main goal of the JUICE mission is to study the planetary system of Jupiter, and above all Ganymede - the largest moon of this planet and at the same time the largest moon in the Solar System. In the 17th century, Galileo, considered to be its discoverer, also observed and described the other largest natural satellites of Jupiter: Io, Europa, Callisto.

"Although so far we have discovered over 70 natural satellites orbiting the largest of gas giants, the mass of the four +Galilean moons+ accounts for almost 99% of the total mass of matter orbiting Jupiter" - notes Jacek Kosiec, CEO of Creotech Instruments SA, which participates in preparations for the mission. "There is ice on their surface, and scientists suspect that the conditions prevailing at greater depth, including the presence of liquid water, may be favourable for the emergence of life" - adds Kosiec, quoted in the press release sent to PAP.

How could liquid water exist so far from the Sun? The mighty Jupiter forms a unique gravitational system with its star. The mass of Jupiter is so great that it disrupts the gravity of its satellites. According to mathematical models developed by scientists, this leads to the contraction movement of the planet`s largest moons. The resulting friction can "warm up" their cores to temperatures favouring the occurrence of liquid water. JUICE will verify this theory, we read in the press release.

"JUICE focuses on collecting data to describe the physical conditions prevailing in this mini planetary system that could lead to the formation of life-friendly environments" - explains Dr. Hanna Rothkaehl, a professor at the Space Research Centre of the Polish Academy of Sciences.

The target of the most detailed research is Ganymede, because, according to scientists, it is a form of a natural laboratory for analysing geological evolution and environments favourable for life development in icy conditions, and it a possible location of future exploration bases in the Solar System. The probe will also conduct research of the geological structures and atmospheres of Europa, Callisto and Jupiter.

According to the assumptions of the mission, the Jupiter system research will take at least three and a half years, but the journey will be more than twice as long.

The spacecraft weighing over 5 tons will be carried by the massive Ariane 5 rocket, and during its long journey towards Jupiter, it will perform several gravity-assisted manoeuvres. These manoeuvres consist in using the gravity of a planet or another object to increase speed and change direction of a spacecraft`s flight. During the journey towards Jupiter`s orbit, JUICE will use the gravitational assistance of Venus and Mars, and, three times, the gravitational assistance of Earth. The probe must embark towards Jupiter in a specific, very short (three weeks) time window in the spring of 2022, to use the conjunction of Venus, Mars and Earth. "JUICE is a very large and complicated mission, and the fixed launch date of the mission is an additional difficulty its participants face" - says Tomasz Zawistowski from Creotech Instruments SA

The success of the mission will largely depend on whether the numerous entities involved in the construction of the JUICE probe will be able to design and manufacture all of its components on time. If not, the launch will be postponed and not all scheduled tests will be performed. Airbus Defense and Space will be responsible for integrating the entire system, but many companies and scientific institutions from all over Europe are in the chain of suppliers.

Creotech Instruments SA will be responsible for the assembly of electronic components of two out of ten research instruments that will be on board JUICE. These components will be designed and tested by engineers and scientists from the Space Research Centre of the Polish Academy of Sciences, of which Creotech is a subcontractor.

The first instrument called SWI (Sub-millimeter Wave Instrument) will measure the temperature distribution, composition and dynamics of the stratosphere and troposphere of Jupiter, as well as exospheres and surfaces of ice moons. It will be equipped with an antenna with a diameter of 30 cm. The second instrument called RPWI (Radio & Plasma Wave Investigation) will consist of four smaller instruments that will allow to diagnose, in a wide range of frequencies, the properties of electric and magnetic field and describe the extreme plasma environment in the Jupiter system.

"Thanks to RPWI, we will learn how the strong electric and magnetic fields originating from Jupiter affect the largest moons of this planet - Ganymede and Europa" - explains Dr. Hanna Rothkaehl. "The magnetic field of Jupiter is 14 times stronger than the Earth`s magnetic field, and in the entire Solar System, in this respect, it is second only to sunspots, which constitute the strongest natural source of electromagnetic radiation in our cosmic vicinity" - she adds.

Creotech Instruments SA is also responsible for providing electronics specialists who assist the Spanish Airbus Defense and Space branch CRISA in the integration of flight electronics for the JUICE spacecraft. In this case, they will not work on scientific instruments, but on the platform, on which the architecture of the entire JUICE probe will be based.

"The mission is very demanding, because the spacecraft, both while travelling through the void of the Solar System, and later, while remaining in the Jupiter system for at least three and a half years, will be exposed to extreme and changing thermal conditions and high radiation, especially dangerous for electronic components. It is extremely important that all components work flawlessly under these conditions, because the success of the entire mission depends on it" - adds Paweł Kowalczyk, responsible for quality assurance at Creotech Instruments SA.