3D scans of skulls and a collection of ancient DNA will be available on the information platform e-Czlowiek.pl 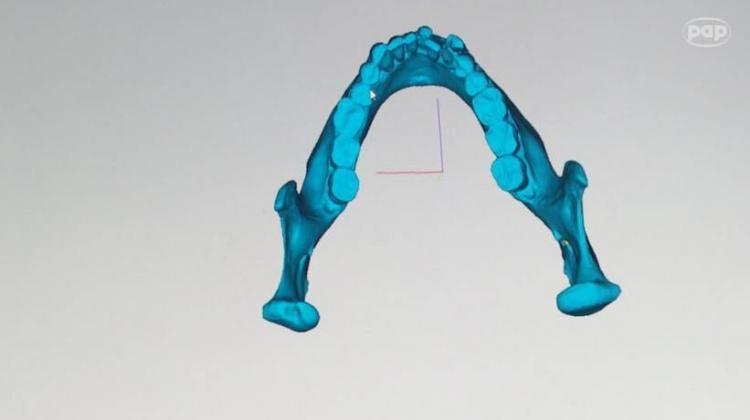 How were the people in Poland changing over the centuries, from the early Middle Ages to the 19th century? Did the Slavs migrate to our territories, or are they indigenous? The 3D scanning project and digital access to skulls, skeletons and DNA from human remains from central Poland is expected to help answer these questions.

The project is carried out by the Biobank Laboratory of the Department of Molecular Biophysics in cooperation with the Department of Anthropology of the University of Lodz. The result of these activities will be the information platform "e-Czlowiek.pl", which will contain 3D scans of skeletons and skulls as well as digital records of genomes or aDNA (ancient DNA) sequences of 200 people living near Brześć Kujawski the period from the early Middle Ages to the 19th century.

Until now, this valuable osteological collection of approx. 3 thousand skulls and skeletal bones was available only to a small group of researchers from the University of Lodz. Currently, as part of the project, the skulls and skeletons of 200 people will be digitised. In the digital version, they will be available for further research.

"Thanks the latest technologies, 3D scanning, we are able to scan both skulls and other skeletal bones, and create digital models that will be available to almost everyone, with a single mouse click" - explains Błażej Marciniak.

During the digitalisation work, researchers will also isolate full genomes of these 200 people. This will enable further, in-depth analyses of the history and transformation of the population living in the areas of present-day Poland.

The researchers plan to describe Polish populations living from the early Middle Ages to the 19th century. Prof. Wiesław Lorkiewicz from the Department of Anthropology of the University of Lodz notes that so far, anthropological studies have often concerned only morphological features. "Now, thanks to this project, we have a unique opportunity to investigate these phenomena at the level of genetic diversity of the population" - the anthropologist emphasises.

Digitised skeletons mainly come from the sites near Brześć Kujawski in central Poland. The anthropologist emphasises that Kujawy is a very interesting area, inhabited virtually from the beginning of the Neolithic, that is from the appearance of the first farmers ca. 5.5 thousand years BC. "There are many sites near Brześć Kujawski that overlap chronologically and we practically have a continuity covering several thousand years (...). On the other hand, it is central Poland, so we can say that this area is representative for the Polish population from the early Middle Ages to the 19th century" - adds Prof. Lorkiewicz.

Thanks to 3D scans, researchers will be able to analyse in more detail, for example, the shapes of the skulls, their similarities, and thus also the kinship and ethnicity of these people.

"We would like to find out how people were changing over the millennium, why they were changing, how the shape of the skull was changing and why, because the skull shape was indeed slightly different in medieval times than it is today" - notes the anthropologist.

Research shows that the shape of the cerebral part of the skull has changed over the centuries - people in the early Middle Ages had more elongated heads. This interesting phenomenon has not been fully explained yet. "There are many theories on this subject, but it is not known whether this was a microevolutionary genetic change, or perhaps an environmentally conditioned one, associated with a reconstruction of the skull as a consequence of the chewing apparatus being relieved" - he adds.

Researchers are also trying to assess the level of diversity of the population living in the territory of present-day Poland during that period and whether migrants from other areas of Europe, for example from Scandinavia, appeared here. "There is the topic of participation of Scandinavian groups in the creation of the Polish State. Such groups indeed penetrated Poland, they could be hired warriors. But I think that, for example, we can probably put aside the hypothesis that Mieszko I was Scandinavian" - the researcher says.

The features, the variability of which anthropologists study, include the height of the body. We already know that, for example, people in the early Middle Ages in Poland were relatively tall, similar to Poles in the 1960s. Later there was a clear decline in body height, lasting until the 19th century.

"Few people probably realize that the average height of a man`s body in the 19th century was about 165 cm. That was the height of Uhlans, for example. From the late nineteenth century, there was a clear increase in body height and this is still the case today. We want to find out whether these changes are conditioned only by the environment, the living conditions. We know that what we eat, what and how much we eat, how often we get sick in childhood - all this affects our body height, or was it also conditioned genetically" - says Prof. Lorkiewicz.

The resulting database of digital records of the aDNA sequences of 200 people living in the last thousand years will help study the genetic basis of these phenomena.

According to scientists, the database will allow to check, for example, whether the changing features were subject to selection and whether the frequency of genes conditioning the occurrence and development of certain traits or diseases was changing. Experts can also look for the DNA of pathogens that conditioned various pathological changes.

There are already first conclusions from the research of the team from the Biobank Laboratory and the Department of Anthropology. The researchers believe that in the case of the population living in Kujawy there was a surprisingly strong genetic continuity, dating back to the time of the first farmers, 7.5 thousand years ago.

"It seems that we are dealing with an interesting genetic continuation in the population living in Kujawy from the early Middle Ages to the 19th century. The roots of these populations probably reach the Neolithic, perhaps even the Mesolithic" - the scientist suggests.

According to the authors of the project, creating a platform containing valuable data, addressed to Internet users, will contribute to setting new standards in the field of digital access to scientific data.

"We see the need to reach two different groups of recipients - one are the scientists who are eager to use this material in scientific research .The second part of the project is to create an e-museum, where the information obtained from research will be presented in an accessible form for ordinary people, history enthusiasts interested in this area, human history and evolution" - concludes Błażej Marciniak.

The project "Digital access to biomolecular and descriptive resources of the Biobank and the Department of Anthropology of the University of Lodz - the characteristics of the population living in contemporary Poland over the centuries. Information platform e-Czlowiek.pl" is scheduled to be completed in 2020. For its implementation, the researchers received over PLN 6.6 million in funding from the Operational Program Digital Poland.