Expert: We already feel the negative effects of climate change in Poland 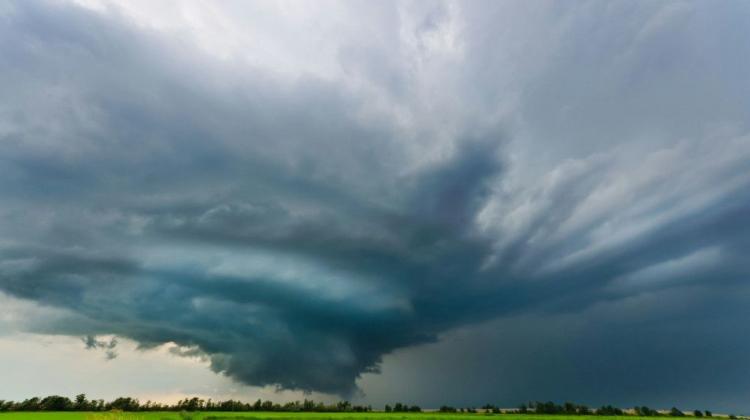 In addition to the intensification of extreme weather events, such as hurricanes and floods, we now more often feel - also in Poland - the negative impact of climate change on health, Dr. Zbigniew M. Karaczun from the Warsaw University of Life Sciences said during a meeting with journalists.

"Even recently it seemed that the effects climate change in Poland were the future, that we would start feeling them only in 30 or 40 years. Unfortunately, it is already happening, we are feeling various negative effects of climate change, including health effects" - said Dr. Zbigniew M. Karaczun from the Warsaw University of Life Sciences. He was one of the participants of the Warsaw meeting of experts with journalists "Climate change and health".

According to the expert, extreme meteorological and weather phenomena such as hurricanes, floods and hail, as well as droughts and heat waves have intensified in recent years. Heat waves, when the average temperature exceeded 25°C, were recorded, for example, in the summer of 2018; in the spring of 2019 there was an increase in the incidence of hurricanes, rains and floods, he said.

"The plant vegetation period has increased in our country by more than 25 days compared to the year 1970, which increased the period of high concentrations of plant dust in the air and extended the risk of allergies. In 2019, plant pollination occurred in January" - Dr. Karaczun reminded.

The specialist warned against the misconception common in Poland, that climate change in Poland would be "rather favourable". As he pointed out, it would be detrimental to agriculture, food production (and the wider economy) as well as our health.

The data presented during the conference show that compared to the 1960s and 1970s, the frequency of hailing in Małopolska has doubled, while in other regions, such as the Opole, Świętokrzyskie and Silesia provinces it has increased by a factor of one and a half. Since 1970, the number of floods has increased fourfold, and since 2004 it has doubled.

In the years 1951-1981, droughts in Poland occurred on average every five years, and more recently - every two years. The level of groundwater has dropped by several meters. The frequency of hurricanes increased several times. In the 1980s and 1990s, there were a few hurricanes per year, now there are more than twenty. The record year was 2006, when 52 hurricanes were recorded.

According to Dr. Karaczun, we are not ready to face the threats resulting from climate change - the more so that the so-called climatic scepticism is still strong in our country. "We are poorly prepared to manage these effects and we know very little about which of them will be most dangerous for us, which require taking urgent steps. We do not conduct research in this area, we mainly use research conducted abroad" - he argued.

Experts emphasized that heat increased the scale of hospitalisation and reduced work efficiency. According to the data presented during the journalist workshops, in 2003 alone the heat wave in Europe caused premature death of at least 70,000 people. In 2010 in Russia, 11,000 died prematurely for the same reason.

Research conducted in the US shows that at least one out of every million inhabitants dies prematurely as a result of the heat. Observations in Hungary suggest that it may be 10 to about 40 people per 1 million.

According to Dr. Karachi, children and pregnant women are particularly vulnerable to negative climate changes. "It is estimated that almost 88 percent of all disease cases associated with the effects of climate change occur in children under five years of age" - he added.

The geography of some diseases such as dengue, malaria and Lyme disease, is changing. "In 2018, the first death from dengue, a viral tropical disease, was recorded in a person who had never left their country" explained Dr. Hab. Karaczun.

These changes will also affect people in Poland. The data presented during the workshop show that since 2005 the incidence of Lyme disease carried by ticks has tripled in our country. "This cannot be explained only by improved diagnosis of this disease" - the specialist emphasised.

According to Dr. Karaczun, although the time is short, our country still has a chance to adapt to climate change. "If we do not take appropriate measures to reduce greenhouse gas emissions, we will lose this possibility" - he alarms.

According to the Intergovernmental Panel on Climate Change (IPCC), there is scientific evidence that in the last 50 years man has had the greatest impact on the world`s climate. We can still stop these changes - the IPCC argues - but we have about 12 years to do that. (PAP)