Scientists developed a mobile system for evaluation of athletes` training 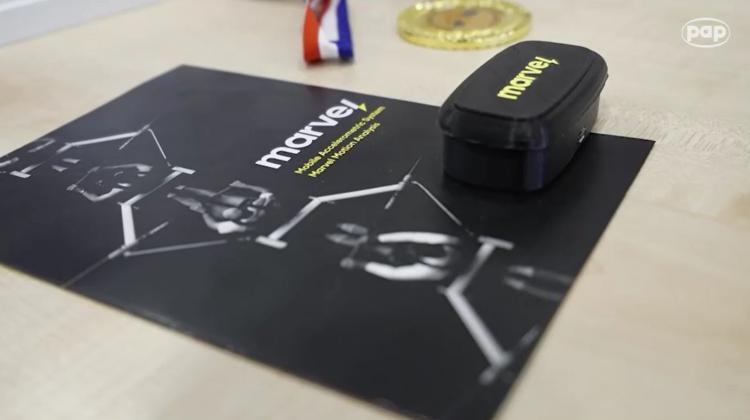 A mobile system, which allows to analyse the soldier`s reaction time during shooting training or kinematic parameters of athletes` movement, has been developed by scientists from the Medical University of Lodz. In the future, it could also be used to analyse the balance and gait of the elderly.

The proprietary accelerometer system Marvel Motion Analysis is designed to measure kinematic motion parameters. It was created in the Academic Laboratory of Movement and Human Physical Performance DynamoLab of the Medical University of Lodz.

"Our system can be used in non-laboratory conditions to evaluate, for example, response time to a light or sound signal for military or sports shooting training" - says Dr. Magdalena Fronczek, a motion analysis specialist at DynamoLab.

The system has many other applications. It can be used, for example, to assess biomechanics for the purposes of physiotherapy, sports and personal training, and to evaluate ergonomics.

"We can, for example, measure the kinematic parameters of athletes` movements. We have already carried out a project in cooperation with a group of footballers and basketball players, assessing the impact of kinesiotaping (dynamic taping) on the parameters of vertical jump and shuttle run" - explains Dr. Fronczek.

The innovative system developed at the Medical University of Lodz is based on RaspberryPi microcontrollers as well as accelerometers and gyroscopic sensors. It is operated with a tablet, making it a mobile device that can be used outside the laboratory.

"Thanks to gyroscopic sensors and accelerometers, we can even determine parameters such as jump height or energy expenditure. The innovation lies in the development of proprietary software, which allows to adjust sensor sensitivity to the speed of the analysed motion" - emphasises the motion expert.

The Marvel Army module for shooting training was tested first. It could be used, for example, in the training of students of the Military and Medical Faculty of the Medical University of Lodz, but also for the needs of the army or police.

In this case, a person equipped with a weapon simulator shoots after the light or sound signal is emitted. The system analyses the acceleration of the firing hand and reaction time calculated on the basis of the obtained acceleration results. As a result, it analyses the speed, at which a shot is made after observing a specific signal.

"We can use this in teaching how to assume the right position during training, or in ergonomics, to design uniforms or holsters" - adds Dr. Fronczek.

Another tested module - Marvel Move - is used to assess kinematics during a run or jump. It may be used for the evaluation of athletes` training or during recovery after injury.

The authors of the system want to add new modules, including Marvel Balance that will evaluate the balance, and perhaps also the gait of the elderly.

"First and foremost, we want to expand our activities to include older people and bring the project closer to the needs of the society. We want to add the assessment of gait or balance in older people, in whom the problem of balance and falls is very serious. Our equipment could support telemedicine and it is currently being developed for this purpose" - concludes Dr. Magdalena Fronczek.

Patent application for the system has already been filed. The system won medals at international invention fairs in Paris and Taiwan.