Researchers have built a gold-coordinated protein cage with "impossible" geometry 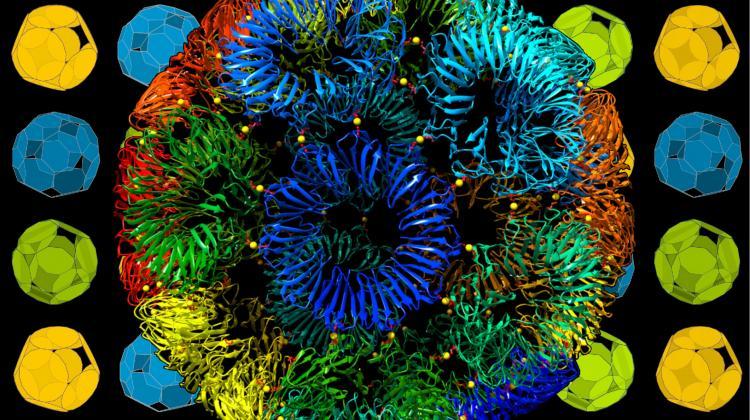 The model of a "mathematically impossible" gold-coordinated protein cage with a diameter of approx. 22 nm. The cage is made of 24 11-sided protein rings (each in a different colour in the figure) connected with gold ions (yellow balls). In the background, models of other impossible solids, referred to in the article in Nature. Credit: Heddle Lab, Jagiellonian University

Researchers, including a team at the Jagiellonian University, have managed to build a nanometer-sized protein cage, in which fragments of proteins are coordinated with gold ions. Researchers obtained a "mathematically impossible" solid - an almost regular Archimedean polyhedron. The solution published in Nature can be used, for example, to deliver drugs to cells.

The team headed by Prof. Jonathan Heddle from the Małopolska Center of Biotechnology of the Jagiellonian University managed to design and build a unique protein cage with a diameter of 22 nanometers.

This tiny, hollow protein complex has interesting properties. "It is unbelievably stable" - Prof. Heddle says in an interview with PAP. The cage will not fall apart even if it is boiled in water for hours. In addition, it is resistant to acids and alkalis (pH 3-12) and dissolves well in water. The research results have been in the prestigious journal Nature.

Scientists hope that such cages can be used to deliver substances to the cells and release them in controlled conditions. In the interior of the protein cage - about the size of a virus - amazing treasures can be enclosed. It will fit several dozen protein molecules, nucleic acids or, for example, drugs. Although the object is stable, researchers know how to open such a "golden cage". Bonds with gold break down in conditions that prevail in the cell.

Even the production of artificial protein is an art. But that`s not all that the international team has managed to show. It turns out that the protein subunits that make up this structure are not stuck together or entangled, as it usually happens in proteins. They are connected with each other very elegantly, with gold ion bonds. Thanks to this, it is easier to produce structures with controlled shapes from such proteins. "We are entering the next level when it comes to controlling the production of artificial protein cages" - comments Prof. Heddle.

Another curiosity associated with the "golden protein cage" is that at first glance, to mathematicians this object can appear to be... impossible to create. "The geometry of this cage defies the laws of mathematics" - says co-author of the study, Dr. Artur Biela from the Jagiellonian University.

He explains that the protein cage consists of 24 identical, 11-sided protein rings connected with gold ions. They have been connected to form 24 walls. An Archimedean solid... Well, almost.

A mathematician would say that a 24-sided solid, like the one presented in Nature, can be built of 24 pentagons, but not of 11-sided objects. 11-sided objects cannot be used to build a polyhedron. However, what is impossible in the rigid world of mathematics, is - as it turns out - possible in the world of flexible proteins. Proteins are so flexible that small irregularities that occur in the solid are easy to cover up. So what seemed impossible to mathematicians, biologists have managed to do. It may seem that gold - a precious metal after all - does not react with other elements. Professor Heddle explains that gold nanoparticles and ions are able to react. And this is the property the scientists have used to build the novel protein cages.

The scientists have more ideas for building other "mathematically impossible" solids from protein components.

The researchers not only designed the protein, but also produced it, thoroughly studied its structure and examined its properties. In further research they want to modify their "golden" protein cages in order to give them further desirable properties. For example, ones that will safely lead such a protein cage to a desired location in the body and open it at the right moment.