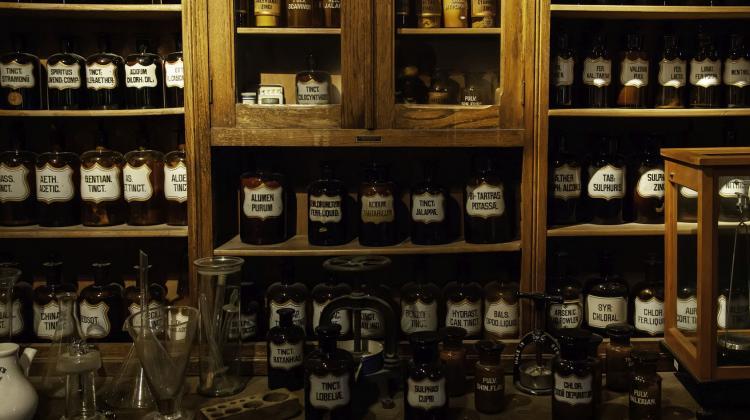 The first woman in the world who opened a female pharmacy, the first to obtain a license for her own pharmacy in Poland, a social activist - Antonina Leśniewska, patron of the Warsaw Museum of Pharmacy. She was a unique figure, says the manager of the institution, Iwona Arabas.

"Antonina Leśniewska is a completely unknown figure and I am making efforts to include her in the group of great women who really changed the world. She was practically a coeval of Maria Skłodowska-Curie, and their life stories were very similar. Both had to go through the stage of being a governess, both were active during the First World War, in completely different ways of course. One went to study to St. Petersburg, the other to Paris, but they shared certain elements of the then situation of women, both as a student and as someone who breaks into a man`s world" - says Iwona Arabas, director of the Museum of Pharmacy.

Leśniewska was born in 1866 in Warsaw. "After overcoming great difficulties, she graduated from the Imperial Military Medical Academy in St. Petersburg. She was one of the first two women to obtain a pharmacy undergraduate degree from this university and became the first woman in Russia to obtain a master`s degree in pharmacy, thus obtaining the right to run a pharmacy and pharmaceutical courses. That was very important for her, because she had bad memories of the pharmacy apprentice work she did when she was a pharmacy student. She decided to facilitate the way to this profession for other women, and as a master of pharmacy she founded a reputable pharmaceutical school for women. Even men approached Leśniewska to prepare them for a pharmacy undergraduate degree exam" - Arabas emphasises.

"She was the first woman in the world to open a female pharmacy, in St. Petersburg, at the Nevsky Prospekt, a very prestigious location. Her pharmacy was really amazing, she was the first to introduce a two-shift rotation because of the women employed there. She was a well educated person with very broad horizons, to the extent that she fought not only for women, but wanted to change the image of the entire pharmacy. The goal of her efforts was to abolish the artisanal-academic education system, abolish practicing as a pharmacy apprentice and assistant, make pharmacy a real science that would have its own place at universities" - Arabas describes.

She also quotes a fragment of Leśniewska`s memoirs, which she thinks is "moving and still valid": "The times and living conditions have changed. A pharmacy is now just a store and everything has dwarfed and degenerated. Talented people are rare among pharmacists. It can not go on like this. The pharmaceutical community has to shake it off and at the beginning of the 20th century, gather all of its strength to shed this yoke with all the factors conducive to the decomposition of its body".

During the First World War, Leśniewska became involved in patriotic activities, helping Polish prisoners and refugees. After the war ended, she returned to Poland. "She was very active in charity, she ran various shelters, helped repatriates, assisted Poles resettled to Siberia. Unfortunately she was very independent in her activities and considered difficult to cooperate with. She was active in charity organizations together with Aleksandra Piłsudska (the wife of Józef Piłsudski, the Marshal of Poland - PAP), to whom she handed over her social works in the early 1930s" - Arabas reports.

Leśniewska was the first woman to obtain a license to run a pharmacy in Warsaw. "And this was a new pharmacy, which should be emphasized: because women could take over existing pharmacies, for example, from their parents, but she obtained a license herself and opened a new pharmacy at 72 Marszałkowska St. Antonina Leśniewska was a amazing figure, a very strong woman. She was awarded the Knight`s Cross of the Polonia Restituta Order in 1930, which confirms that she was appreciated for her merits. She died in 1937. The first location of the Museum of Pharmacy was the building of the Leśniewska pharmacy. She is also the patron of our institution" - adds the director of the Museum of Pharmacy, a branch of the Museum of Warsaw.