Prime Minister: We are becoming an important link in the global research chain 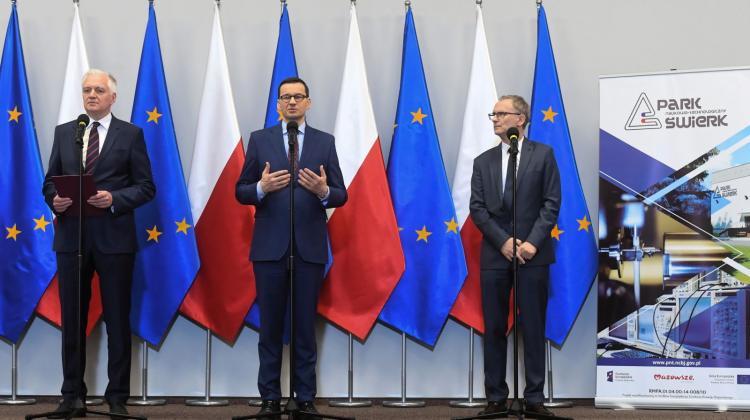 The Prime Minister participated in a press conference related to the announcement of the winners of the prestigious Teaming for Excellence competition under the European Horizon 2020 programme. The conference was held at the National Centre for Nuclear Research (NCBJ) in Otwock-Świerk.

13 grants with a total value of 195 million euros were awarded in the Teaming for Excellence competition under the Horizon 2020 programme. Three institutions the will coordinate the grants are located in Poland. The Ministry of Science and Higher Education reports that grants for three Polish projects will amount to 45 million euros.

"These three grants that Polish research institutes have managed to win are a breakthrough, because in the area of this programme (...) Horizon 2020 we have not had successes such as this, when three units - from the University of Warsaw, from the National Centre for Research Nuclear and AGH University of Science and Technology - together with cooperating units have won significant grants for innovative scientific research" - said Prime Minister Mateusz Morawiecki.

The Prime Minister added that "we are becoming a part, a very important link in the research chain of many institutes around the world".

He also warned that "in the world of external applications we are dealing with huge competition. This competition drains our brains, drains our capabilities - this is what the world looks like". Therefore, the Polish government wants grants such as Teaming "to be as many as possible, and that Polish institutes conduct research that will then be sold around the world through their applications, implementations".

Deputy Prime Minister and Minister of Science and Higher Education Jarosław Gowin, who attended the conference, said that each of the three Polish projects awarded in the European Teaming for Excellence programme gives a chance for groundbreaking scientific discoveries and proves that Polish science has the global level potential.

Jarosław Gowin reminded that the competition aimed to select centres of scientific excellence that offered research with commercialisation potential.

"These are the largest research grants that Polish scientists have ever obtained. (...) These funds (...) will not only help to modernize the infrastructure, to create and develop excellent Polish research teams, but also help us do something what we really care about: reverse the brain drain vector" - said Jarosław Gowin. He noted out that these projects were being developed in cooperation with leading institutions in Europe.

"Each of these projects gives a chance for breakthrough scientific discoveries and proves that Polish science has the global level potential" - said Jarosław Gowin.

The selected Polish initiatives include NOMATEN - Center of Excellence in Multifunctional Materials for Industrial and Medical Applications, coordinated by the National Centre for Nuclear Research. The French Commissariat à l`energie atomique et aux énergies alternatives and the VTT Technical Research Centre of Finland also participate in the project. Research groups will work on materials resistant to extreme conditions, for example for the nuclear power industry, including the 4th generation reactors. Research will also be carried out on materials necessary for high-performance chemical installations and the synthesis of new drugs, in particular radiopharmaceuticals.

"This grant is a real breakthrough, it is almost seven years of funding for a team of dozens of scientists who can finally be paid well and who see the prospect of development" - emphasised the National Centre for Nuclear Research director Prof. Krzysztof Kurek.

He added that the project carried out in his institution concerns specific materials subjected to extreme conditions: very high pressures, very high radiation, in a very malignant and aggressive chemical environment. "Such materials are found in nuclear technologies, but not only there" - he added. He emphasised that winning the Teaming competition grant would not be possible without good cooperation with the Ministry of Science, the Foundation for Polish Science, the National Contact Point and the National Centre for Research and Development. "We have been preparing this grant for four years, but it was worth it" - he added.

The second of the co-financed centres is Sano: Centre for New Methods in Computational Diagnostics and Personalised Therapy. The members of the consortium are the National Centre for Research and Development, AGH University of Science and Technology, LifeScience Cluster in Kraków, the German Fraunhofer Society, the Forschungszentrum Jülich GmbH and the British University of Sheffield. The centre will conduct research on advanced computer simulations and innovative methods of medical diagnosis and individualized therapy.

The third initiative is ENSEMBLE3 - Centre of Excellence for nanophotonics, advanced materials and novel crystal growth-based technologies. It consists of: the Institute of Electronic Materials Technology, the University of Warsaw, the National Centre for Research and Development, Italian Sapienza Università di Roma, German Karlsruher Institut für Technologie and Spanish nanoGUNE Cooperative Research Center. The research unit will use crystal growth technologies and new functional materials with innovative electromagnetic properties. They will find applications in nanophotonics, optoelectronics and medicine.

Deputy Prime Minister Gowin noted during the press conference that for three and a half years the government had been making every effort to build a bridge between the world of science and the economy. "More spans are being created" - he said. He mention two innovation laws, the Innovation Box, the implementation PhD program, and the creation of the Łukasiewicz Research Network. "All these activities are designed to bring out the greatest potential of the Polish scientific world" - commented the Minister of Science.