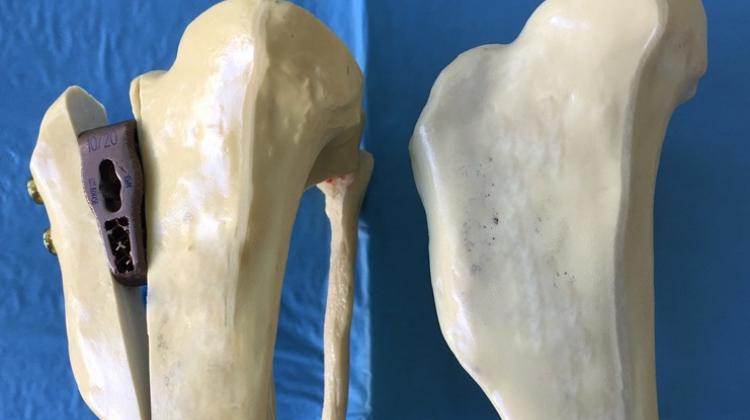 Dogs, like humans, can suffer knee joint injuries. Broken cruciate ligaments in the hind legs are common in quadrupeds. Polish scientists have developed an implant that allows dogs with such injuries to regain full fitness.

The method of surgical treatment of the broken anterior cruciate ligament by implantation of an implant into the previously cut tibial tuberosity was developed by researchers from the Department of Surgery and Radiology Clinic, Faculty of Veterinary Medicine, University of Warmia and Mazury in Olsztyn. The team of researchers is headed by doctor of veterinary science Yauheni Zhalniarovich.

As the scientist explained, broken cruciate ligaments in dog knees is a serious and common problem faced by dog owners. Approximately 80 percent of all cases of hind limb lamenss are caused by this injury. Dogs that are prone to breaking the ligaments in knee joints are usually overweight, have too little activity or genetic predisposition. The shrunken hind leg and dog limping on the remaining three legs is the most common appearance of a dog with this condition.

The developed method of treating broken ligaments in the knee joint involves the implantation of a titanium implant, which is inserted after cutting the tibial tuberosity and moving it forward" - explained Dr. Zhalniarovich.

He added that the technique developed by his team causes the least degenerative changes in the dog in the long term, as a result of which the dog is in a good shape and does not limp for a long time.

Previous knee stabilization techniques developed by Belgian doctors involved the use of medial implant. Consequently, unequal distribution of forces in the knee could result in fractures of the tuberosity (a part of the tibia-PAP).

"The Polish implant is attached from the front with two screws in the middle, and thus the knee joint in the dog\'s paw is stable and does not suffer from micro-movements" - the scientist explained.

Importantly, the return to fitness is fast and efficient. Dogs with the innovative implant can put weight on their paw after three days; in the case of the older method, the dog can stand on the affected limb only after 2-3 weeks.

An additional advantage of the method is the price - surgery with the innovative implant is about half the cost of previous surgical procedures.

Scientists from the University of Warmia and Mazury co-operate with the company "ChM" Implants and orthopedic tools from Juchnowiec Kościelny near Białystok, which prints prototypes of dog knee implants on 3D printers.

The surgical treatment method using the innovative implant is being improved on sheep because, according to the researchers, the sheep\'s knee has a similar biomechanics as the dog\'s knee. But eventually the implant will be used in dogs. Olsztyn scientists have already performed the first surgeries in dogs with full success.

Dr. Zhalniarovich\'s team received a grant from the National Centre for Research and Development in the amount of PLN 972 thousand to develop a method of surgical treatment of broken anterior cruciate ligaments using an implant. (PAP)