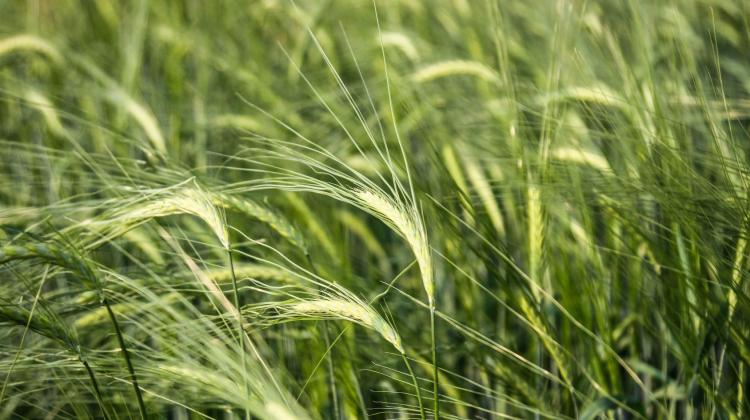 Barley that retains 30 percent more water in leaves than its original variety has been obtained after several years of research by biologists from the Department of Genetics of the University of Silesia in Katowice. The discovery could give farmers the opportunity to grow barley with higher tolerance to drought.

"We have managed to obtain the barley mutant hvcbp20.ab that is tolerant to drought stress. It retains 30 percent more water than its original form under drought stress" - told PAP head of the SONATA research project funded by the National Science Centre, Dr. Agata Daszkowska-Golec from the Department of Genetics of the University of Silesia in Katowice.

Barley is an important species among cereals. It has the fourth place in terms of crop area in Poland and in the world. Importantly, at the end of April its genome was almost completely sequenced; in addition, a wide array of functional genomics tools makes it a model species for monocotyledonous plants. This may translate into an increased pace of further discoveries related to this species.

As part of earlier research projects, geneticists from Katowice generated the TILLING platform (Targeting Induced Local Lesions in Genomes) for spring barley as a tool for learning the functions of genes, and over time also for improving desirable traits. The team led by Prof. Iwona Szarejko obtained the barley population after the chemical mutagenesis (the population HorTILLUS - Hordeum vulgare TILLING platform of University of Silesia in Katowice), a population of mutants with different genes, consisting of about 10 thousand individuals.

The researchers focused On the abscisic acid signalling pathway; this hormone is closely associated with the response to drought stress and to the CBP20 gene function. "When we were interested in finding a mutation in the CBP20 gene, we performed a TILLING analysis, which in short consists in searching for mutation in this particular sequence in 10,000 individuals of the HorTILLUS population. We have identified a series of allelic mutants that carry a defect in this particular gene, but at different places in the sequence" - said Dr. Daszkowska-Golec.

One of them turned out to be the mutant hvcbp20.ab, tolerant to drought stress. In the conditions created by the biologists it not only lacked the optimum amount of water, but it was also exposed to high temperatures. It turned out that it adapted to stress conditions much faster than its original form - the Sebastian variety. Before those plants could "figure out" that they had water shortage, the mutant already triggered the response - reprogramming its metabolism to fight the water deficit in the substrate.

The researchers demonstrated this by combining data from detailed physiological, morphological analyses and global gene expression profiles. The latter allow to compare sets of genes that are either activated or deactivated in the mutant to regulate the response to drought stress.

"Our analyses showed, for example, that the mutant has an altered number of stomata on both sides of the leaf. The stomata are valves that allow for gas exchange, but they also contribute to the loss of water. The plant can control the opening and closing of these pores. The mutant in the CBP20 gene closes them much faster under drought stress conditions, thus preventing the loss of water. It retains over 30 percent more than the +Sebastian+ variety under stress" - emphasised the geneticist.

Interestingly, the mutant has more stomata on the upper side of the leaf, but they are smaller and remain slightly open. In addition, the leaf is curled inward, allowing the mutant to have minimal gas exchange without water loss - as the stomata are not exposed to the outside and protected by a rolled leaf blade. Studies of the photosynthesis efficiency, and the plant\'s basic nutrition process, have also demonstrated a better adaptation of the mutant to the stress conditions.

"It is possible to speculate that, perhaps, this mutant may prove to be a useful material for growers, after crossing it with elite barley varieties that are grown today" - said Agata Daszkowska-Golec.

In the further stage of their research, geneticists from Katowice want to investigate in greater detail the role of the CBP20 gene in response to drought stress, with particular emphasis on identifying specific elements of the water scarcity response pathway it regulates. They also think that it will be necessary to test how the hvcbp20.ab form behaves in natural conditions rather than in greenhouse. The question of what yields the mutant will give remains open.

Dr. Daszkowska-Golec started research related to this mutant in the already completed project POLAPGEN-BD "Biotechnological tools for obtaining cereals with increased resistance to drought" funded by the European Union.

Already available research results have just been published in the international journal Frontiers in Plant Science.