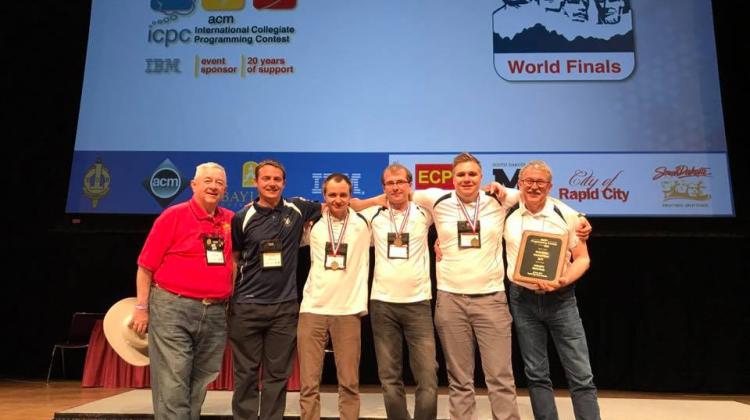 The University of Warsaw team won 2nd place and a gold medal in the ACM International Collegiate Programming Contest (ACM ICPC), which ended last Wednesday night in the United States. Winners were the team from St. Petersburg (Russia).

The 41st Annual World Finals of the ACM International Collegiate Programming Contest were held on 20-24 May in Rapid City, South Dakota.

133 teams from the world\'s best colleges that competed in the finals had been selected in tough regional qualifiers. They represented 44 countries on 6 continents.

The team Warsaw Eagles from the Faculty of Mathematics, Informatics and Mechanics of the University of Warsaw, composed of Wojciech Nadara, Marcin Smulewicz and Marek Sokołowski, solved 10 out of 12 problems, and they were the first to solve task A. With this achievement, they won one of four gold medals and the title of academic vice-champions in collegiate programming, and a prize of 7.5 thousand dollars. The team supervisor was Prof. Krzysztof Diks.

The title of world champions and a prize of 15,000 dollars went to the Russian team from the ITMO University in St. Petersburg.

Poland, in addition to the team from the University of Warsaw, was represented by two more teams: representatives of the University of Wroclaw (they took 20th place) and the Jagiellonian University (34th place). The final results of the competition can be found at: https://icpc.baylor.edu/worldfinals/results

Teams of students from have been advancing to the ACM ICPC Finals every year since 1994. The University of Warsaw holds a record of uninterrupted participation in the finals.

ACM International Collegiate Programming Contest (ICPC) is organized by the Association for Computing Machinery, an association of IT professionals, both practitioners and theorists. It is the oldest, most prestigious and largest in terms of number of participants event of this type. University teams from around the world participate in the competition. Finalists are selected in the regional qualifiers held on all inhabited continents.

In 2018, the ACM ICPC finals will be held in Beijing, China.