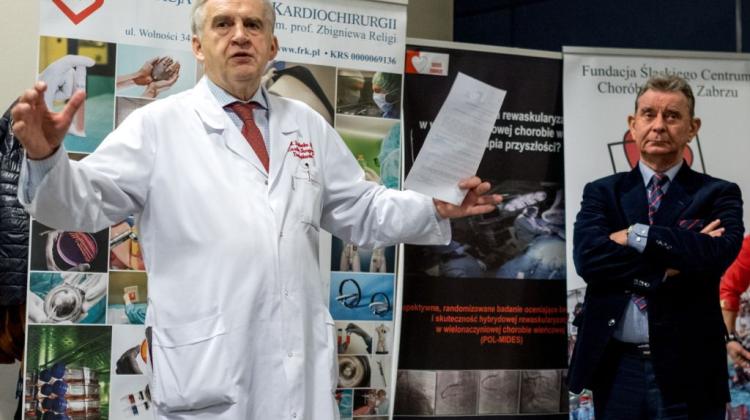 Polish POLVAD Religa heart prostheses work well and are safe - Prof. Marian Zembala said on Wednesday in Zabrze. He added that research into their modernization continues; in a few years we should have domestic, this time implantable prostheses.

"Polish POLVAD Religa heart prostheses work well and are safe. The only problem is that the patient has to stay in the hospital all the time, away from the family. But Polish engineers are already working on a prosthesis that can be implanted - just like the American ones - allowing the patients to be discharged and go home. It will take a few years of work and research" - said the director of the Silesian Center for Heart Diseases in Zabrze, the leading cardiology and cardiac surgery centre in Poland, Prof. Zembala.

POLVAD heart prosthesis, used since 1999 until now, is the first such Polish prosthesis. It was developed at the Foundation for Cardiac Surgery Development in Zabrze with the inspiration of Prof. Zbigniew Religa (today the foundation is named in his honour).

The longest period of mechanical cardiac support with this prosthesis is almost two years. The patient was 32 years old Marcin Drab from the Mazowieckie province. In August 2015 he was admitted to the Silesian Center for Heart Diseases where he was implanted with pneumatic artificial left ventricular support chamber POLVAD Religa.

The patient - husband and father - spent the next months in hospital in Zabrze; he received a comprehensive treatment. As he said, during that time he had daily rehabilitation, cycling exercises, walking in the corridor; he spent most of the time in bed. "It was a long time; there were ups and downs. The worst were the two microstrokes; not much else happened" - he said.

The patient received a heart transplant in March.

Marcin said told me that now he was feeling well. "I have no shortness of breath, I do not get tired, so that\'s great. Now I dream of returning home" - he said at the conference. He should be discharged before Easter.

For doctors and nurses, such moments when the patient recovers and can return home are the best moments of their work. This was also acknowledged by the Foundation for Cardiac Surgery Development director Jan Sarna, who creates heart prostheses. "We work for such moments, we do all this so that we can finally hear from the patient who is being asked: +How did you feel with those chambers? It\'s nothing, I feel good, I\'m going home, I\'m healthy+" - emphasised Sarna.

23 years old Martyna Kryczka from Cieszyn also benefited from Polish prostheses. In August last year she gave birth to her daughter. Three months after childbirth, Martyna began to have health problems - first she felt bad, had a strong cough, was weak. Then it turned out that she had a heart problem; she had a heart attack while hospitalised. When doctors said that a heart transplant would probably be necessary, she was sent to the Silesian Center for Heart Diseases.

She spent 44 days connected to a pump. Transplant took place on January 19, after a month she went home. "I know I can not carry my baby yet, but now it is great, I can do almost everything myself" - said Martyna.

Prof. Zembala reminded that the Polish heart support prostheses are used as a bridge for heart regeneration or transplantation (the cases of Marcin or Martyna where regeneration did not occur). "There is also a third application when the patient has transplantation contraindications and lives on the chambers. We already have such patients and this application develops" - he pointed out.

He also once again called for more social sensitivity and awareness with regard to donations.

The new heart prostheses are currently being developed by engineers and doctors at the the Foundation for Cardiac Surgery Development in Zabrze. "The ones that we are going to market are the family of Polish heart prostheses Religa Heart - the latest generation of prostheses, made in state-of-the-art technology, using state-of-the-art materials. They will be newer, more reliable, probably cheaper, easier to use and better in every way" - noted Jan Sarna.

Founded in 1991 by eminent cardiac surgeon Prof. Zbigniew Religa (1938-2009), the Foundation for Cardiac Surgery Development is a non-public and non-commercial research institution that supports the development of cardiac surgery, introducing modern techniques and technologies for the treatment of heart into clinical practice.

In 2016 doctors from the Silesian Center for Heart Diseases in Zabrze performed 46 heart transplants and 19 lung transplants - the highest number in Poland. (PAP)