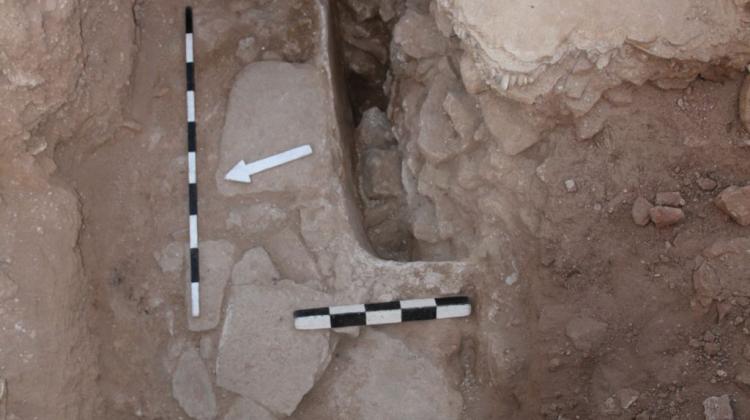 The oldest remains of the ancient city of Nea Paphos in Cyprus have been discovered by Warsaw archaeologists during excavations. Approximately 2.4 thousand years old fragments of walls and floors are located in the part of the city inhabited by the richest.

Paphos is one of the most important archaeological sites in Cyprus. In the Greek-Roman period, it served as the capital of the island. It was built in its western part at the end of the 4th century BC. Because of its importance, it is listed on the UNESCO World Heritage List.

"During the last excavation season we managed to reach some of the first buildings erected in this ancient city" - told PAP Dr. Henryk Meyza of the Institute of Mediterranean and Oriental Cultures of the Polish Academy of Sciences. His team conducts research in the residential district. The first excavation work here was performed in 1965 by the nestor of Polish Mediterranean archaeology, Prof. Kazimierz Michałowski. The work of the mission of the Polish Centre of Mediterranean Archaeology of the University of Warsaw, currently headed by Dr. Meyza, is conducted in the same area.

The extensive and luxurious buildings located in the area studied by Polish archaeologists had been functioning for almost a thousand years, from the 4th century BC to the 7th century AD.

"From the beginning, they were erected on a regular grid of streets, which cut the area into about 100 by 35 m lots. The houses were rebuilt and erected in a similar way in successive decades> This was also because the construction of this district was preceded by the construction of water drainage system in the stone substrate that was used throughout the history of the city" - said Dr. Meyza.

In recent years the efforts of the Warsaw team of Polish archaeologists in Cyprus (another team led by Prof. Ewdoksia Papuci-Władyka from the Institute of Archaeology of the Jagiellonian University studies the agora of the city) focused on excavations within one of the houses, called "Hellenistic" (due to the preliminary dating - the 4th century BC). As with other houses in the area, the layout was quite simple - the buildings centered around three courtyards, the central of which was a square surrounded by a colonnade, with a garden in the middle.

"The house has been researched since the 1980s, but because of its large stylistic heterogeneity it has always been a mystery to us. It was only in recent years that we learned how many redevelopments and changes in its layout had taken place. The central part housed Pools of different sizes, and the largest, square pool had a side length of about 7 m. The last phase of development, with the garden, was built only in the late 1st or early 2nd century AD, already in the Roman period" - said Dr. Meyza.

While trying not to destroy the later walls, archaeologists attempted to get to the deepest layers, where the oldest buildings were hidden. It turned out that these were built in the times when the city was founded, i.e. at the turn of the 4th/3rd century BC (as is known from written sources).

The last king of the independent ancient Cypriot state of Paphos was the founder of this city - said Dr Meyza. Former residence (Palea Paphos - from Latin Old Paphos) ceased to serve its purpose mainly because it no longer had access to the port. In the meantime, the new location (Nea Paphos, or New Paphos) had a convenient harbour, and then large piers were also built.

The archaeologist emphasised that the discovered fragments of the house of the first centuries of the city were not aesthetically fascinating, but offered an insight into the contemporary architecture.

"The relics of the first houses erected within a residential area are not impressive in terms of craftsmanship. The floors were made of clay. Only in later houses they were replaced with stone slabs or meticulously made mosaics" - said Dr. Meyza.

Unfortunately, researchers are unable to reconstruct the probable appearance of Neo Paphos at the time of its foundation. Excavations are carried out only in those places that allow to look under the surface of the earth without damaging the well-preserved relics of the walls from later times. These are mostly empty courtyards, but already on that basis archaeologists have managed to arrive at some conclusions.

"Over time, the new capital became the largest centre of the Hellenic fleet next to Alexandria in Egypt. At that time Cyprus had a large supply of timber for the construction of large ships, mainly cedars, and among other things for this reason it was a valuable asset to the rulers of Egypt from the Ptolemy dynasty. They contributed to expanding the city and elevating its rank. However, the majority of visible relics come from later times" - said Dr. Meyza.

The scientist estimates that various international archaeological missions operating for decades within Nea Paphos have studied at best 10 percent of the city area. "Many spectacular discoveries can still lie ahead" - he concluded.