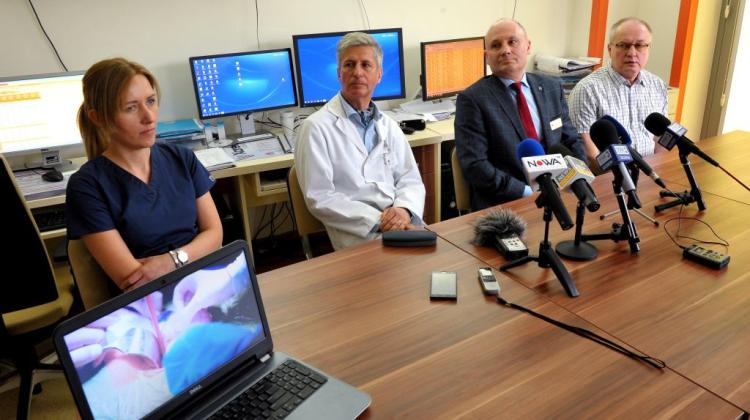 Between Warsaw and Szczecin, Poland\'s first cross kidney transplantation from living unrelated donors has been performed. Both operations were successful - told PAP Prof. Artur Kwiatkowski, director of the Institute of Transplantology, Medical University of Warsaw.

Both kidney implantations took place on Tuesday, simultaneously in Warsaw and Szczecin. In the capital the surgery was performed by specialists from the Institute of Transplantology and the Department of General and Transplant Surgery of the Infant Jesus Teaching Hospital in Warsaw (under the supervision of Prof. Kwiatkowski and Dr. Rafał Kieszek). In Szczecin, it was performed by a team under the supervision of head of the Department of Nephrology and Kidney Transplantation of the Provincial Hospital Prof. Mark Myślak and Dr. Tomasz Śluzar from the Department of General and Transplantation Surgery of the same hospital.

The organs collected from the donors were transported free of charge by LOT flights, by authorized persons. "We have prepared an emergency plan in case weather conditions would not allow for air transport. Ambulances would be sent from both cities to meet midway between Warsaw and Szczecin and exchange donated kidneys" - said Prof. Kwiatkowski. The idea was that after removal of the kidneys their transport until implantation should not take more than six hours.

The specialist told PAP that preparations for the treatment took several months. It started with a couple from the area of Lublin, who came to the Institute of Transplantology of the Medical University of Warsaw. The wife suffered from renal failure and was dialyzed, and her husband declared that he would give her his kidney. He could not, however, be a donor to his wife for immune reasons (blood group incompatibility, donor\'s HLA anti-antibodies - PAP).

According to Prof. Kwiatkowski, the Institute\'s database already contains data of more than 30 couples who want to exchange kidneys due to immunological incompatibility. This time it was possible to match the couple from Lublin and the one from Szczecin. "In the Szczecin couple, the situation was the opposite: the man needed a kidney and his wife wanted to donate one to him" - said the specialist.

It was decided that this time the cross transplantation would take place in two cities, and not as previously - all operations in Warsaw. Earlier, in 2015, the transplant was performed in the capital in two couples where men wanted to give their kidneys to their partners, but could not do so because of an incompatible blood type or cross test, which showed that a transplant could not be performed between them.

Prof. Kwiatkowski said that both operations of kidney implantation in Warsaw and Szczecin were successful. "In both recipients, woman and man, renal parameters normalize" - he assured. The donor from Lublin, from whom kidney has been collected in Warsaw, is expected to leave the hospital on Friday, and his wife, who received a kidney from the woman from Szczecin - no later than Monday.

"The road to the transplant was long and took over a year" - said Aurelia Miszczak, who donated her kidney to the man from Lublin. "Our operation was unusual, our kidneys had to fly between hospitals by plane. We had a lot of doubts about such a transplant, we were worried that the organs might somehow be damaged during transport. The doctors convinced us. It turned out that our kidneys began to work right away, still on the operating tables" - said the donor.

"My illness was revealed four years ago. For three years I had dialyses, I had to go to hospital in Choszczno three times a week, each dialysis took four hours. I was waiting for a transplant for the last year, and now I have a second life" - said Adam Miszczak, recipient from Szczecin. He added that his medical results after the surgery were positive, and his mood improved.

"At the moment, there are about 2,000 patients on the national list of recipients. We estimate that annually about one thousand kidneys transplanted at all 20 centres in Poland come from deceased donors. In developed countries, 50% organs come from living donors. If we increase our capacity by half, we will provide organs to all those in need" - told PAP Dr Tomasz Śluzar from the Provincial Hospital in Szczecin.

"We hope that soon there will be more similar transplants. We are prepared to exchange kidneys with any city in the country, and even across Europe, for example with Prague, Paris or Amsterdam" - said Prof. Kwiatkowski. He added that the Institute of Transplantology of the Medical University of Warsaw had already received such proposals from the Czech Republic and the Netherlands, and even from Ohio, USA.

In the United States, cross transplants are performed simultaneously in up to several dozen couples, and the kidneys are often transported by airplanes. However, this requires coordination of many transplant centres. In Europe, these operations have not yet been performed on such a large scale. The largest centre specialising in this type of procedures is in Rotterdam.

The law in Poland allows for transplants from living unrelated donors. However, according to Art. 13 of the Transplantation Law, it must be justified by "particular personal considerations". (PAP)