Carp snack food - not only for athletes 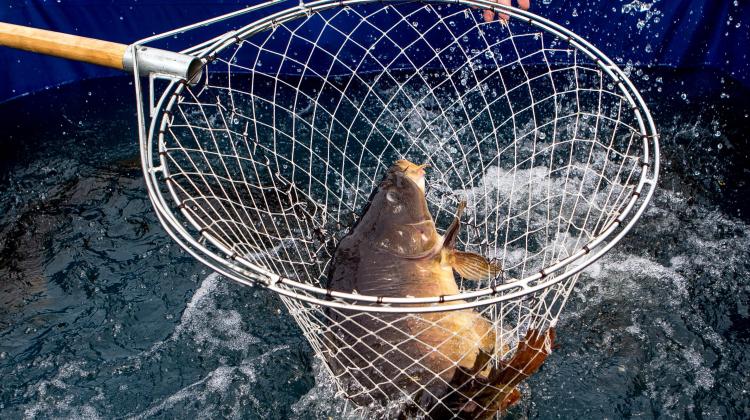 By breathing unhealthy air and leading an active lifestyle, we are exposed to oxidative stress. A way to counteract harmful free radicals can be delicious and healthy snacks made from... carp - Polish scientists say.

Snack foods can be associated with something unhealthy. Not in this case - according to the scientists working on the pro-health carp snacks. Flesh of the fish is rich in nutritional value, contains a lot of unsaturated fatty acids, and in addition it is a source of bioactive antioxidant peptides. Bioactive peptides derived from carp may provoke eliminating free radicals from the body.

Oxidative stress occurs when too large amount of free radicals appears in the human body, and the mechanism of elimination can not handle them. Free radicals contribute not only to tumour formation, but also to many other medical conditions. Particularly vulnerable to oxidative stress are athletes, because production of free radicals increases during intensive physical activity.

Two Kraków researchers, Dr. Joanna Tkaczewska from the University of Agriculture and Dr. Małgorzata Morawska from the University of Physical Education, decided to add the bioactive peptides from carp to foods for athletes. The snack prepared by their team may take the form of fish sticks or biscuits. Before it appears on the store shelves, athletes will try it, and the researchers will test how their oxidative blood profile changed after eating the innovative product.

"Bioactive food is a huge market. We decided to turn carp into a snack to further support the national carp industry. Carp has been a typical Polish fish for hundreds of years, and the sales of this fish decrease from year to year; as many as 80 percent fish farms sell carp only at Christmas time. We want it to be available throughout the year, for example as a snack" - said Dr. Tkaczewska from the Department of Food Technology, University of Agriculture, in charge of the project funded under the LEADER programme of the National Centre for Research and Development.

The first task of her team will be to produce gelatine and bioactive peptides. In the following steps, researchers will design the entire snack - it has to be a mixture of dough (flour and yeast) and meat carp with the addition of previously obtained protein hydrolysates. In the third year of the project, already finished sticks or biscuits will be served to athletes. The researchers will test whether the peptides are as active in vivo (in the human body), and in vitro (in a test tube).

"Our snacks will be tested by representatives of exertion-endurance disciplines, such as canoeists, because they are particularly vulnerable to oxidative stress, more free radicals are produced in their bodies" - explained Dr. Tkaczewska.

Carp snack will be patented. The second patent will cover the hydrolyzate - as a food additive with antioxidant properties. If scientists carry out their plans, in a few years everyone will be able to buy such a hydrolyzate and add it to any food product, such as yogurt or energy bars.

Patents will be owned by the University of Agriculture in Kraków; that institution should be contacted by companies interested in implementing this innovation and production of carp snack foods.

Designing innovative processed carp snack food with pro-health properties designed for athletes will take three years, until 2019. Dr Tkaczewska and her five colleagues have the amount of more than 1 million 140 thousand zlotys from the seventh edition of the LEADER programme of the National Centre for Research and Development.