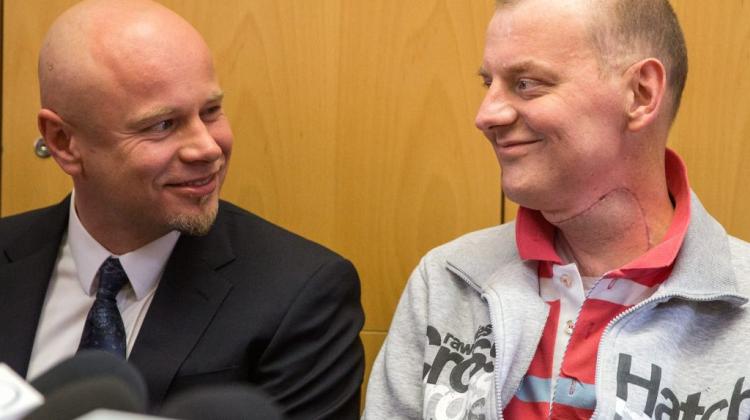 Complex neck organs transplant performed in the Oncology Centre in Gliwice was named the best case in the field of microvascular surgery in 2016 by the American Society for Reconstructive Mircrosurgery, announced the Gliwice hospital spokeswoman, Magdalena Markowska.

Transplant performed by a team led by Prof. Adam Maciejewski in a then 37-year-old patient included the larynx, trachea, throat, esophagus, thyroid gland with parathyroid, muscle structures and skin of the front wall of the neck.

American Society for Reconstructive Microsurgery (ASRM), bringing together more than 500 world\'s top specialists in surgery, granted - with 93 percent votes during the recent annual meeting - the best case award for the presentation "The complex neck organs allotransplantation", submitted by Prof. Adam Maciejewski and Dr. Łukasz Krakowczyk, the only active members of the ASRM in Poland. The paper, selected from approximately 300 presentations from around the world, has been recognized as the best microsurgical case of 2016.

Transplant recipient underwent kidney transplant due to nephropathy in 2001 and has to take immunosuppressive drugs. In 2006 he was diagnosed with acute myeloid leukemia, and in 2009 with advanced laryngeal cancer. The man was treated with radiotherapy. Larynx removal and tracheostomy were necessary. There were complications - necrosis of the lower pharynx and esophagus, extensive cutaneous fistula.

After unsuccessful attempts to reconstruct the oral route and close the fistula he was given gastrostomy, through which he was fed. In the absence of thyroid and parathyroid, he had to take thyroid hormone and calcium.

In 2013 the patient first came to the Oncology Centre in Gliwice. In 2014 doctors reconstructed the oral route, using a microvascular lobe tract. Gastrostomy was removed, restoring the anatomical food path. In 2015 the patient qualified for allogeneic neck organs transplant. According to the doctors, indications for the surgery were no evidence of recurrence of cancer, poor quality of life and the fact that the patient had to take medications against rejection anyway. "In this respect, he was the ideal candidate" - explained Prof. Maciejewski.

The transplant surgery took 17 hours and went according to carefully prepared plan. Doctors removed the scarred neck structures and implanted the graft, they also recreated digestive and respiratory tract.

This is yet another award the doctors from Gliwice received from the American Society for Reconstructive Microsurgery. Several years ago, the first face transplant conducted in Poland was named the world\'s best reconstructive surgery of 2013. It was the world\'s first face transplant due to life indications. 33-year-old patient had an accident at work - stone cutting machine amputated most of his face. Because of the extent of damage, hindering breathing and eating, and a high risk of infection without graft, in the long run he would have no chance of survival.

The team led by Prof. Adam Maciejewski also conducted a face transplant in a 26-year-old woman, suffering since childhood from neurofibromatosis - benign tumour of genetic origin, that can be life threatening after it grows and is considered one of the main indications to perform face transplant.