Gowin: New technologies are a priority of research and development 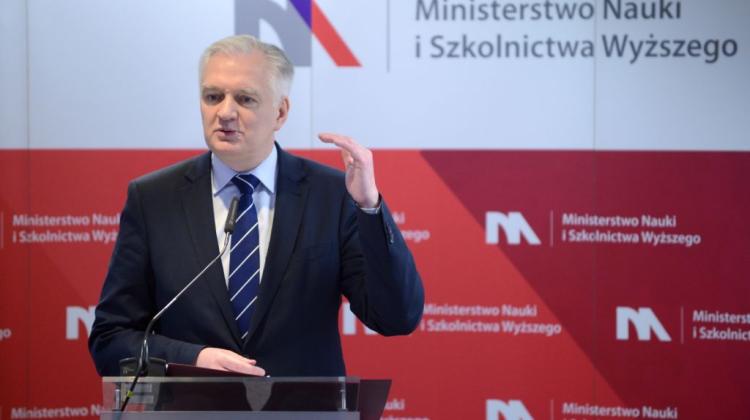 "We are focusing on the development of the areas associated with modern technology" - told PAP deputy Prime Minister, Minister of Science and Higher Education Jarosław Gowin, summarising last year\'s work of the National Centre for Research and Development and outlining its tasks in 2017.

Deputy Prime Minister Gowin expressed the hope that following the changes to the operation of the National Centre for Research and Development, the PLN 5 billion allocated to research and development in 2016 would be spent in the appropriate manner.

Gowin said that a lot of emphasis in the activities of the National Centre for Research and Development will be placed on areas related to modern technologies. In his view, Poland has a chance to become a "globally important player" in the drone industry. He also mentioned the area of computer games. "We have significant achievements in this industry, we have great scientific base, because the Polish specialists have long been among the world leaders" - he reminded.

The National Centre for Research and Development director, Prof. Maciej Chorowski told PAP that this year his institution will distribute approx. PLN 5.5 billion for research and development. "They will primarily be projects that address the goals of Prime Minister Morawiecki\'s responsible development strategy, so they should make an important contribution to the welfare of Polish economy" - he said. The Centre will continue funding research and development projects inspired by own ideas of entrepreneurs and scientists.

The Centre introduces another mechanism for awarding funds. It involves setting a predefined objective, to which the study should lead. "We maintain all the previously existing and working mechanisms, we finance projects reactively in response to requests that we receive. We evaluate these proposals in terms of scientific value, in terms of chances to achieve economic success, but we are also introducing a new mechanism, which is based on predefined goal to which the study should lead" - explained Prof. Chorowski.

Among the research and development programs remaining in the Centre\'s offer are so-called fast track, sector-specific and strategic programs. They include such measures as GameInn (video games production) and Innostal (steel sector). The new initiatives include programs that relate to pre-commercial procurement. Feedback mechanisms involving support for venture capital funds will be implemented on a larger scale.

"We have many reasons to feel satisfied that the funds spent on research and development have contributed to the improvement of product quality" - said Prof. Chorowski. He noted that he sees no "flagship product" that could arise as a result of large concentration of the Centre\'s funds.

"Within a year, two, maybe three we would like to be able to show something completely new that would not exist if not for a conscious scientific and economic Polish policy" - he concluded.

The largest part of the funds for research and development is awarded by the National Centre for Research and Development under the Smart Growth Operational Programme (SG OP). It is the largest national instrument in the European Union, which supports development and industrial research, commercialisation of R&D and cooperation between science and business. The amount allocated to its implementation in the years 2014-2020 exceeds 36 billion zlotys. More than half of this amount, nearly 22 billion zlotys, is at the disposal of the National Centre for Research and Development - an executive agency of the Ministry of Science.